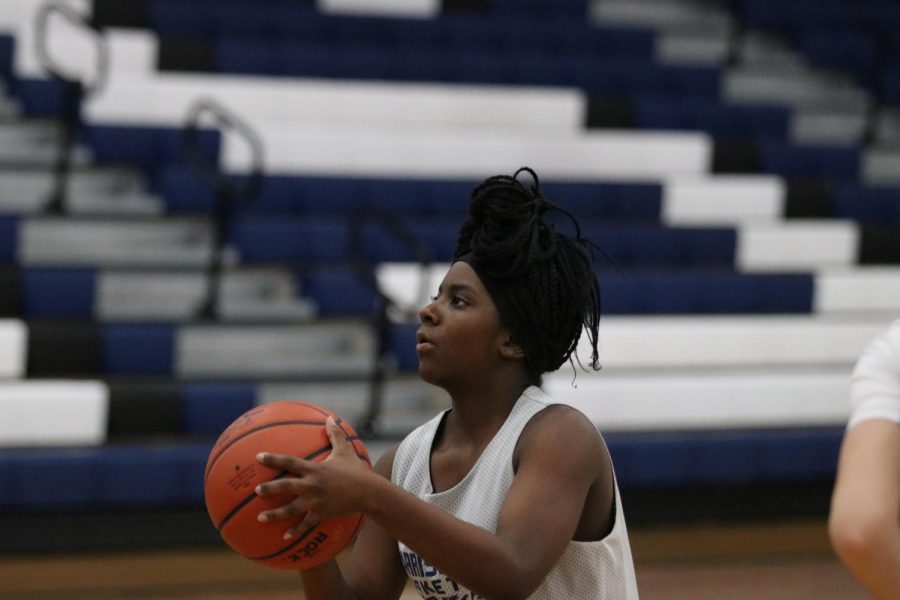 Senior Calayiah Stuart preparing to shoot during one of her basketball practices during junior year.

Q: How long have you been playing basketball? What prompted you to start playing? Have you played any other sports in high school?

A: I’ve been playing basketball since I was like seven years old. I got into the game because my sister played and my dad was a coach, so it made me want to give it a shot. I haven’t attempted to play any other sports other than basketball.

Q: Describe your favorite memory or moment from playing basketball.

A: My favorite memory from basketball will always be the team bonding we had. During my whole basketball career at HHS, I felt like everyone I played with [was] really close with one another, which was a good experience.

A: My biggest takeaway from playing basketball is the skills I learned, such as communication and how to use teamwork. It was all hard to accomplish, but eventually I got used to it since we are a team [and] we have to have good communication and teamwork skills because it was about all of us, not just one person.

Q: Describe a challenge you overcame in your sport and how you moved on from it.

A: My biggest challenge [during] my whole career was communication. I could talk all out of basketball and even to my teammates, but as soon as the coaches came around, I was quiet and shy for some reason. I moved on from it because I realized I had to become the leader and the leader is supposed to tak, so eventually I got over it. The challenge I overcame was actually focusing in school. I feel like basketball helped me a lot because if I did not get good grades or didn’t attend school, I would not be able to play in a game or practice.

Q: How have you grown in your high school career playing basketball?

A: I’ve grown a lot, to be honest. I started playing high school basketball when I was in eighth grade. I was the starting point guard on JV, then freshman year I got moved up to varsity and I had to listen to the upperclassmen and learn the game on a different level. Sophomore year, I became the starting point guard for the varsity team because the senior point guard graduated. From that point on, I knew I had to step up and become a leader. Since then, I just started growing more as an individual and a teammate.

Q: How has your experience in the sport contributed to who you are now?

A: It contributed a lot because now my communication skills are better and I am a leader to the ones that tend to look up to me. I am usually an independent person, but if I have to work with a group I know I could because basketball taught me teamwork.

Q: What are some of your biggest accomplishments?

A: My biggest accomplishments in basketball [have been] being a leader, [my] teamwork skills, [my] time management and [my] communication. None of these came easy, [and] that is why I had to push myself.

Q: How did you feel when the season was cancelled this year?

A: I was upset because it was my last and final year playing basketball. I was really looking forward to the season and walking on senior night, but unfortunately things happened and caused me to lose my final season. Since basketball got canceled, I have decided to graduate high school after the first semester and continue life from there.

Q: Do you have plans to continue with basketball in the future?

A: I do not have any plans to continue my basketball career after high school.

Q: What goals did you have for yourself in basketball, both in the past and for this season? Did you meet any of these?

A: One of my goals was to better myself and my teammates, and I could say I definitely did this. It was not easy, but it also was not hard. It just took time and dedication to accomplish this goal. My other goals were just gaining more skills which I also accomplished from playing basketball.