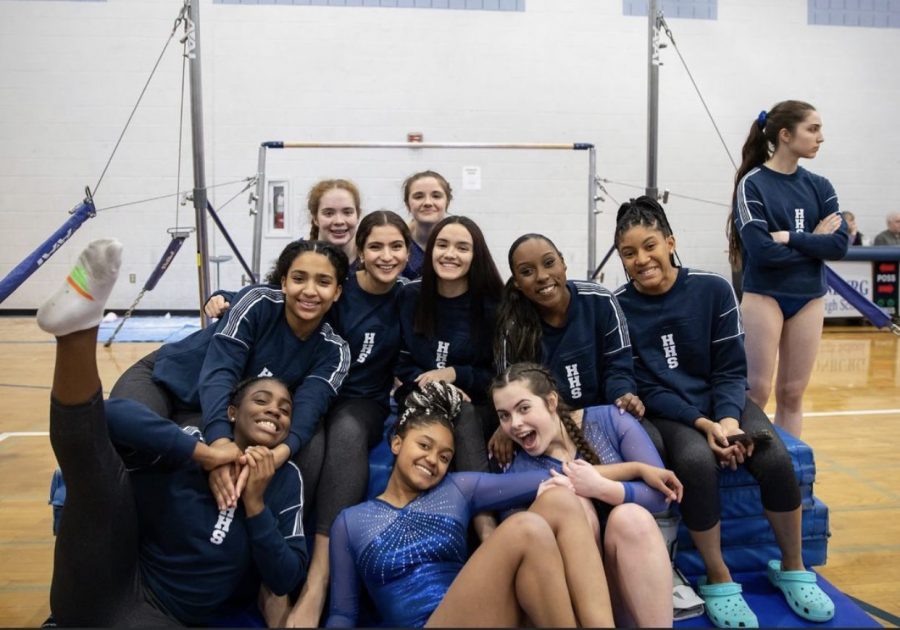 Jalal (middle, second from left) after a home meet during the 2020 season.

For senior Lare Jalal, gymnastics was always with her. While growing up in New Jersey and Kurdistan, she was very intrigued by the sport. When she moved to Virginia, she stopped doing gymnastics because finding a training facility was difficult at the time. When her friend senior Chloe Nichols encouraged her to join the HHS gymnastics team during their sophomore year, Jalal took the opportunity and joined.

Growing up, Jalal learned a lot of her skills independently. Having never formally worked for a team until she joined the HHS gymnastics squad, the team experience was new for Jalal.

At HHS, the gymnastics team trains and works alongside the Spotswood and Turner Ashby gymnastics teams. This fact proved helpful and unique for Jalal.

“I feel like [training with the other teams] was really helpful and it was really fun. But at the same time, it made things a lot more difficult because you’re essentially having to work together with the people you’re competing against, which is kind of odd. It made the competitions a lot less competitive because we were like, ‘Oh, you know, that’s just whoever.’ We also had a lot more coaches. Every practice has four or five coaches, which again, made it easier, but it also made it difficult, because each coach was a little bit more focused on their team and certain people, so it was less like, one-on-one time,” Jalal said.

This unique training method was one of the biggest takeaways for Jalal.

“My biggest takeaway is having to work with people that you’re competing against. Having to become friends with people that you’re going to inevitably be competing against is a really weird experience. This is because you guys would be learning [skills] together so you’ll see what they’re doing and in the back of your head, you’re just like, ‘Oh, I kind of want to be better than them.’ But then you’re also friends with them, so it’s a weird thing,” Jalal said. “You want to win, like you want to have a higher or better score, but at the same time, you’re not going to try to ruin their routine or anything like that. It’s not all dramatic. It’s very strange because you’ll be helping people out you’re competing against. ”

One big aspect of gymnastics is competing against other teams. For Jalal, this was a new experience that made her uncomfortable when she first joined. This caused her to not compete during her sophomore year. However, through growing in the sport, she gained the confidence to finally compete during her junior year.

“I was really scared. I absolutely hated competing. My sophomore year, I didn’t compete at all because I was just so uncomfortable with it. I was so scared. The entire time I did gymnastics growing up… it was never actually competing. It was always just learning, so this was like the first time I actually genuinely had to compete and it was absolutely terrifying. I messed up like four or five times but, you know, it’s okay. It’s fine. Everybody’s still cheering you on,” Jalal said.

One of the most comforting thoughts for Jalal while competing was that not everyone was watching her. Gymnastic meets have multiple events going on at the same time, which took a lot of pressure off of Jalal.

“You don’t feel like everybody’s watching you. Five people at max are watching me. So if I fall, oh well, so that mindset that makes it definitely a lot easier. It’s not like a super, super competitive thing. Even though it is a team sport, it’s also an individual thing. Your main goal is beating your last score [or] trying to do a skill you didn’t do last time, things like that,” Jalal said.

Competing and learning new skills was always nerve-racking for Jalal.

“I mean, it’s gonna be nerve-racking because it’s dangerous. I’m not trying to break my face open. It’s gotten to the point where… it doesn’t matter what happens. If I do [a new skill or compete], I’m either going to get hurt or I’m going to stick it. If I stick it, I got a new skill, it’s a win-win situation,” Jalal said.

While Jalal’s gymnastics experience has been cut short, she still encourages new people to try it. Jalal’s mindset is one thing that new members can earn from.

“Just do it. It’s honestly fun. It’s not that bad. Like I said, it is super scary. Nine times out of 10, you will get hurt because it’s super dangerous. You’re just throwing yourself and hoping you don’t land wrong. That’s kind of what it is,” Jalal said. “And honestly, that mentality helps so much. If I get hurt, I get to go home. If I stick it, I got a new skill. That’s the most beneficial way you can think about it, because any other way you’re literally gonna, like, pee yourself because you’re so scared.”