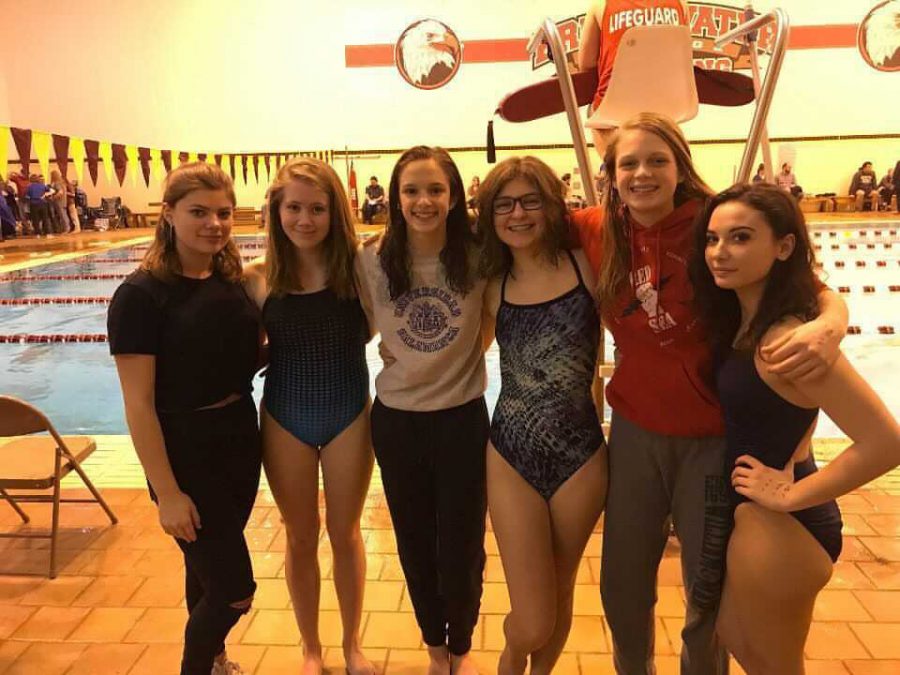 Alexiou (fourth from left) during a meet her freshman season.

Growing up in the city of Harrisonburg, swimming was always an integral part of Stella Alexious’ childhood summers. Now a senior at Harrisonburg High School, Alexiou is facing the reality that her nostalgic memories of swimming are coming to an end with the announcement of the suspension of winter sports by Harrisonburg City Schools.

“I am going to miss high school swimming so much, it has meant the most to me. I am going to miss goofing off with everyone and having such a good time together and going to meets and having inside jokes that nobody else understands. It really is just the best time, I will miss the team comradery,” Alexiou said.

When Alexiou  first started to swim with the Westover Waves at the age of five, she quickly developed a passion for swimming and carried her interest into her high school career.

“[My earliest memory of swimming] is summer league. Between going to meets and practices with everyone and being able to grow up swimming with my friends made it easier to love the sport,” Alexiou said. “I have been swimming ever since I was five when my parents signed me up for the Westover Waves swim team. Through that, I have grown a love for swimming which carried over and inspired me to do high school swimming as well.”

Similar to other high schoolers, Alexiou has undergone and experienced many changes between her freshman and senior year of high school. Not only has Alexiou improved her skills of swimming in the past four years, but also developed a close relationships with her teammates and coaches.

“Over the past few years I have definitely gotten closer to the team and with that I have grown a deeper love for the sport. Going to practices and meets and working with the other captains to figure out everything and make it work as smoothly and as nicely as possible, it’s all just a lot of fun. The senior coaches on the swim team when I was a freshman [were my role models]. Also all of the people on the girls swim team when I was a freshman. Specifically, Anna Rath, Crista Cole, Andi Fox and just all of the senior swimmers,” Alexiou said.

With ample time to reflect on what she has overcome in her swimming career, Alexiou realized that learning to focus on her own goals and not comparing those with her teammates was imperative to feeling accomplished amongst her teammates.

“Working hard to get my times down [was a challenge]. It’s hard on the high school team if you do not swim year-round to compete with people who swim year-round. You have to retrain to get yourself in shape whereas the rest of the people are just training to get better,” Alexiou said. “I would say my biggest challenge is to force myself to keep practicing even when everyone around me is better than me because of their year-round swimming and that tancitity.”

Although she initially struggled to overcome her self-doubts around her times, Alexiou experienced moments of great pride.

“I think that my favorite moment [on the team] was when I got my backstroke time to the point where I could actually start swimming it on par with some of the VAST kids, that felt really good. It felt really good to just beat my own record in the event as well,” Alexiou said.

Additionally, Alexiou has been impacted by her team and coaches over her high school swimming career. Alexiou acknowledges the fact that she has gained valuable lessons from those who have surrounded her.

“Through the swim team, I have learned the importance of having fun with the people around you because it really does make a difference. I think in swimming we all know that it is very competitive but we all do it in such a fun spirit that makes it feel so much more enjoyable. The people that I’m around have inspired me in so many ways. High school swim is really a huge mix of people and just being around people from different backgrounds everyone on the swim team has inspired me at some point. Especially the seniors, understanding that and taking [it] into my own hands has really changed me,” Alexiou said.

As a senior, Alexiou realizes that being a freshman on the team may be intimidating in many ways, but the best advice Alexiou offers to her younger teammates is to look past trying to be the best and instead focus on enjoying the experience.

“My advice [to a younger athlete] would be to go into the sport light-hearted. With that, I mean don’t take it as competitively as people push it on you, I know VAST is a huge pressure to be the best and do the best,” Alexiou said. “Honestly, if you just show up to practices and try your hardest that is all that really matters. Really just have fun with your teammates rather than trying to be the next Michael Phelps. Just try and beat your own times and do as much as you can without exerting yourself too much.”

Looking forward to next year, Alexiou is still uncertain on where she will continue her education. Although she does not plan on continuing to swim at the varsity level, Alexiou hopes to pursue an education and potentially play a club level sport in the future.

“I do not know where I want to go to school yet, it really depends on where I get in and financial aid. I am thinking of going to UVA, maybe Georgetown, maybe a school in California, I am not exactly sure. Hopefully I can do club swimming, I am not looking to do competitive swimming just because being a college freshman is going to be crazy as it is,” Alexiou said.

Although she will soon be moving on from her high school swim days, Alexiou’s department is bittersweet as she is grateful for the team and her growth because of swimming.

“Swimming is really one of the best sports that I have ever done. I ran track and did other things but I really enjoy swimming because it is an easy way to work all of the muscles in your body. It really hurts but then you realize you are basically combining three different workouts into one. Overall, it is the most fun out of any sport I have ever done, the team is truly just so incredible,” Alexiou said.