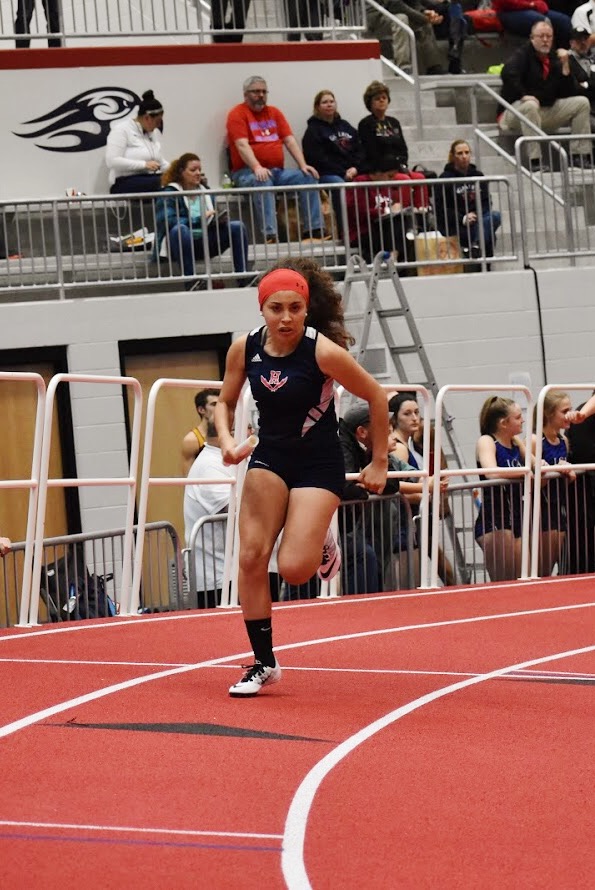 Acosta-Iscoa begins a relay during the 2020 season.

In spite of winter sports getting cancelled, Senior Ashley Iscoa is still dreaming of her senior night, walking down with a parent and her poster. Although she grew up playing soccer and volleyball, Iscoa didn’t expect to grow a passion for indoor track.

“My first thought when I found out the season was cancelled was just ‘Wow. I seriously don’t get to have my last year of indoor track.’ I already pictured the senior night. I’m a person where [when I] start something, I like to finish it. Even though this was a sport that I didn’t know that I was going to do in highschool, I wish I would’ve [ran in] my last season. I can’t believe last year was my last season. No one knew COVID-19 was going to happen, and no one knew it was going to take a lot of things from us seniors,” Iscoa said.

Starting off her sophomore year, Iscoa joined the indoor track team in hopes of becoming a better athlete. Being on the team for two years has benefited Iscoa in different ways.

“I was only able to do indoor track sophomore year and junior year. This year would’ve been my third year. I have grown because I remember being very nervous and timid coming in as a sophomore. I didn’t know what to expect out of an indoor track team in high school. I learned that I am a true leader, and I love getting to know people and pushing other people to become their best. I think that after my sophomore year, I was able to know how to follow, but then [after] my junior year, I knew how to lead. There were definitely people younger than me that were timid as I was, but I empowered them and let them know that this sport is for everyone, you don’t have to be a perfect runner and everyone is welcome,” Iscoa said.

Not only has indoor track made Iscoa a better athlete, but she was able to spread her positivity within the team and create individual relationships with her teammates. Iscoa believes she contributed to the energy of the team.

“My experience in this sport has contributed to who I am today because it’s just made me a better person in a way that I’m always pushing myself to do better. I want to change the atmosphere everywhere I go, just how I joined indoor track… I knew [the team] needed a little more pep in it’s step and a little spice. I was making sure to add that in there and become more of a tight community. I feel like I’m like that everywhere I go. I always try to make the room a bit brighter,” Iscoa said. “I believe I brought a lot of energy and positivity to the team. I felt like it was a little bit dead when I first joined, but I feel like I’m really good at making people outgoing. I’m a friendly person who loves to meet new people. I was definitely the teammate that would just walk around and talk to different people. Being a person on the team, I knew I was looked [up] as the teammate who they can go to. That’s someone I strive to be. I definitely want to be someone who others can depend on.”

When Iscoa joined her sophomore year, then-senior Aaliyah Jordan was a role model Iscoa looked up to. Jordan shared her passion for indoor track in ways that influenced Iscoa to become better.

“When I first started participating in the sport, there was a senior I looked up to. Her name is Aaliyah Jordan; she graduated in 2019. She was such an influence on my indoor track career because she just had a passion for indoor track, just like how soccer is my thing and indoor track is her thing. That was my first time playing a sport in high school that I wasn’t experienced in… She just influenced me to become a better athlete. She just emphasized always putting the work in and being positive,” Iscoa said.

In addition, Iscoa formed a close relationship with her assistant coach Harvey Andrew because of his experience running indoor track in high school.

“One of the coaches that has impacted me so much is coach Harvey Andrew. He was our assistant coach. He was so humble, and he would tell me and two other teammates his story of his youth at Booker T. High School and how driven he was to be the best indoor track runner that the school could have. It was so inspirational because he would always talk about fighting your obstacles and how you could overcome them if you put your mind to it. [He also said ] in order to become good at a sport you have to be hungry for improvement, and that has always stuck with me,” Iscoa said.

While she has only been running for two years, Iscoa has found self improvement in herself.

“My biggest takeaway that I have learned after playing this sport is that I really need to believe in myself and be confident. I can’t think negative as an athlete because it definitely makes me have a downfall on the track,” Iscoa said.”I also believe it has really empowered me as an athlete to help others become better athletes and not always think about myself.”