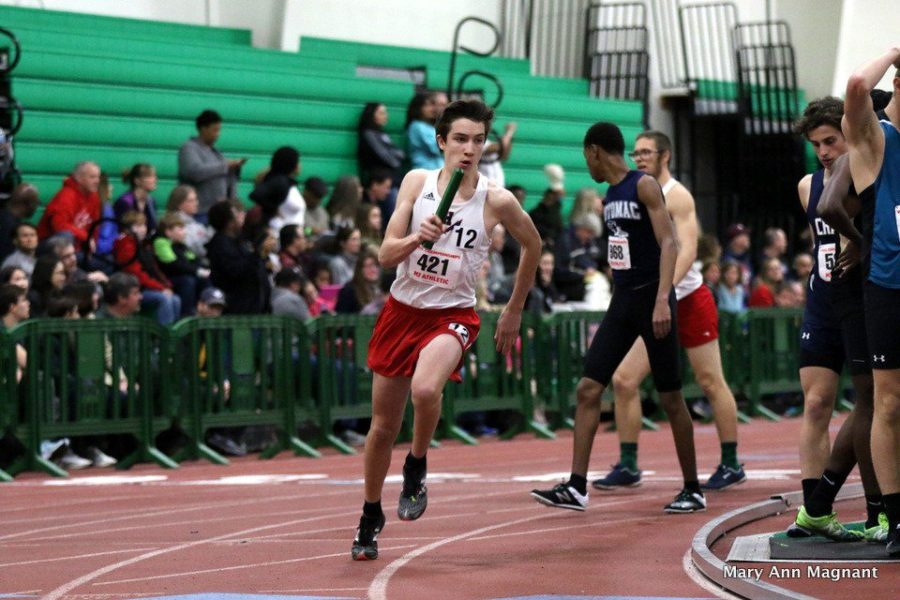 Sophomore David Beck sprints away from the line after receiving his hand off from Hulleman.

When fall sports were cancelled because of COVID-19, athletes looked to their upcoming winter season with hope. They would finally be able to get back to the sports they left behind; however, winter sports were cancelled as a result of spikes in COVID cases. Due to this reality, athletes such as senior David Beck had an abrupt end to their season without knowing it. Beck has ran since middle school and has made it a goal to improve, even if that meant giving up on soccer.

“I ran cross country and track during middle school; however, I was mainly focused on soccer at that point since that had been my main sport since I was five. I wanted to give running a shot since I enjoyed it in middle school. I wasn’t going to be able to play soccer for the high school until the spring anyway, so I decided that it wouldn’t hurt to try running during the seasons that I couldn’t play soccer anyway. After my freshman cross country and indoor track seasons, I chose to stick with it because I enjoyed it so much,” Beck said.

“I had a smooth transition to the high school team. Luckily, my brother was a senior on the team at the time I was a freshman. Everyone was extremely welcoming to me,” Beck said.

Due to feeling openly welcomed to the team, Beck formed close relationships with his teammates and coach. These friendships have grown tremendously over his last four years and he will carry those bonds with him after graduating.

“My relationship with my coach and teammates has grown drastically. Over the past four years, I got the opportunity to meet so many inspiring, caring and dedicated runners. I’m happy to say those are all qualities that my coach, Coach Hertzler, tries to instill in us every single day. It’s sort of cliche to say, but my teammates and coach are my second family. Running has given us a bond that I don’t foresee ever breaking,” Beck said.

Beck’s teammates had a big impact on him, so much so that he named Isaiah King, a former student at Harrisonburg High School, as one of his role models in running.

“[One of my] role models is Isaiah King. He more or less taught me how to be a good person and a great runner. Isaiah was selfless and constantly put his all into everything. It’s been super inspiring to see him grow up, go to college and stick with running,” Beck said.

Staying motivated to improve and train can be difficult, especially with the intensity of running. The people in Beck’s life are what often kept him going.

“I always put things into perspective. The pain [while running] is temporary. Everything will pay off. It helped me to think and feel as though I was racing for more than just myself. I was racing with my 4×8 relay team at almost every meet. That relay was a major motivator for me day in and day out. It also really helped to think about how far I’ve come and how much I still have yet to accomplish,” Beck said. “Last season, my teammates, coach, parents and girlfriend were constantly there to give me more than enough reasons to keep pushing.”

Beck’s junior year running indoor track he not only made it to nationals with his 4×8 relay team, but also in his solo event, running the 800 meter dash. However, it was cancelled because of COVID-19 as well. Although disappointing for Beck, it did not deter him from continuing his training.

“A big challenge during indoor was having nationals be cancelled due to COVID-19. It crushed our dreams of competing on the national level and was unmotivating, to say the least. We all handled the news differently, especially after we realized competitive running wouldn’t be back for many months. I chose to train harder and more consistently. I held onto the chance that we would have a fall cross country, that never happened, so I trained, did time trials and found races across Virginia. I’m planning on continuing to do the same during this indoor track season,” Beck said.

Even though the 4×8 team didn’t get to run at nationals, their accomplishments didn’t go unnoticed and the team still has memories to look back on.

“My favorite memory is probably when our 4x800m relay team qualified for New Balance Nationals last year at the VMI meet. It was relieving, validating and exciting all at once. It brought so much happiness to our relay team,” Beck said.

Beck created a goal for himself freshman year, to get interviewed after a race. He met that goal his junior year. Additionally, another goal of his was to win a state title, not only did he do that, but he also got interviewed by Milestat after his race once again.

“Throughout my high school running career, I always wanted to be the person that got interviewed at the end of a race. During my freshman year, I saw a runner getting interviewed by Milestat after they won a race. I told my mom that was going to be me at some point,” Beck said. “Luckily, I got that opportunity a few times last year during indoor track. Additionally, after I went to states for the first time, I knew my big goal was to win a state title. I’m happy to say I was able to do that. Though, it was never easy mentally or physically getting to that point.”

Even though Beck has done well on the indoor track team, he still gets nervous, some of which comes from the fact that his successes have caused others to have very high expectations of him.

“I get very nervous, especially now that people have high expectations of me. Last year, I started meditating for 5-10 minutes prior to races. It really helped settle my mind and put things into perspective. I also tried to socialize as much as possible just to take my mind off things,” Beck said. “Meeting these goals was a really big motivator to keep working.”

It also showed him how far he’s come.

“I was ecstatic. It was a crazy feeling. It still is. It definitely motivated me a ton at that point, and it continues to do that, especially through tough training times like right now,” Beck said.

Running indoor track for four years has taught Beck many things especially acknowledging the fact that he started freshman year with little to no running experience.

“I’ve become a lot smarter running-wise and a lot stronger physically. When I was a freshman, I barely knew anything about running. Running was a hobby for me at that point, not a sport. I gained knowledge through my coaches, older teammates, and also quite a bit through the internet. All of that helped me perfect my day to day routines and training. It helped me stay injury free all through my junior running season. Overall, it came down to being meticulous about the small tasks, [such as], doing strength, stretching, and sleeping,” Beck said.

Running the past four years has shaped Beck into the person he is now and has helped him get through rough and stressful times.

“Indoor has helped form and shape my determination and resiliency. It’s taught me and has shown me what hard work can do. It’s also been an outlet, just as any sport can be, when times get tough. Along with that, my coaches and teammates have been, and continue to be, amazing support systems. Indoor track sparked my love for running and gave me a lifelong group of friends,” Beck said.

He has big takeaways from the last four years on the process of training and competition, as well as his coaches involvement in that.

“Trust the process, trust yourself and trust your coach. I’ve grown so much as a runner [and] as a person throughout my time on the track team. It’s a journey, though. Injury can creep up on you at any time. It’s all a matter of persevering, staying focused and doing the little things,” Beck said.

Beck’s accomplishments have opened up a lot of doors regarding college. He will continue his running career at either school he picks.

“Next year, I hope to attend either University of Virginia or Virginia Tech. I’m grateful to have the opportunity to run D1 at either of these schools. I’m planning on working towards becoming a physical therapist or something of that sort.”

Beck shared some final advice for younger athletes on the team and for those thinking about joining the indoor track team.

“To younger athletes on the team, stick with it. Running is almost never easy, but it’s one of the most rewarding and exciting sports you could ever be a part of. The running community is incredibly accepting and supportive. It truly is a one of a kind group of people,” Beck said. “To athletes thinking about joining the team, try it. It might be a scary shot in the dark, but it’ll turn out to be a fulfilling one. As I said before, the running community is amazing, so soon there will be nothing to fear.”