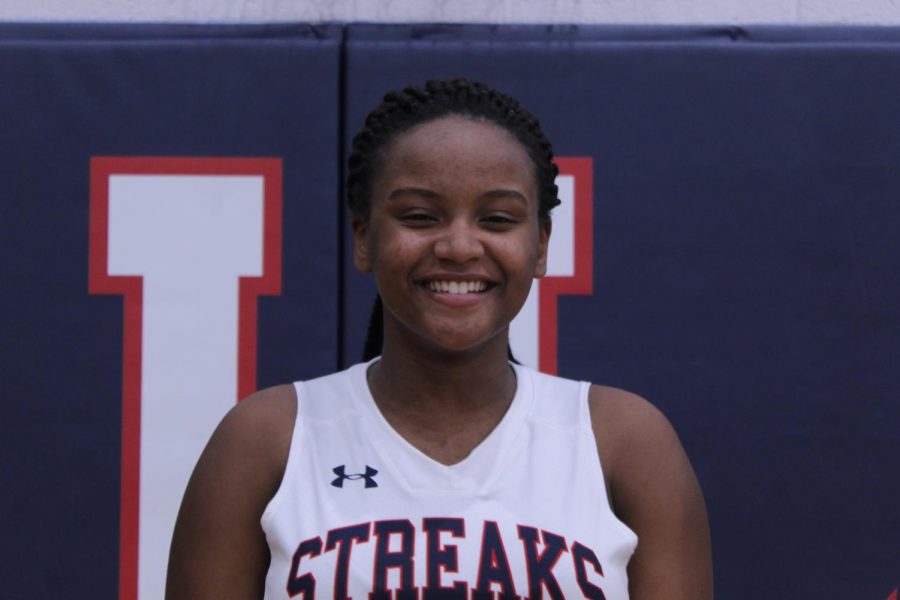 Senior Esther Manson taking a mugshot during her junior year.

Growing up, senior Esther Manson fantasized about playing basketball in high school. Although she took an untraditional path to her senior year, Manson persevered through adversity to have her season ended due to the COVID-19 pandemic.

Although Manson only played two seasons on the varsity girls basketball team, she grew close with her coach and mentor, Durmount Perry.

“My role model was definitely DP. He taught me to never give up and to always keep going. I used to quickly give up on the things I thought I couldn’t do, but DP kept pushing me forward,” Manson said.

In her time with Harrisonburg basketball, Manson can specifically recall one moment during her JV season that she reflects on with nostalgia, even three years later.

“My first layup [was my favorite moment in all my years of playing]. I remember that it was a home game during my freshman year and I was playing on the JV team. Ellie Muncy passed me the ball and I ended up making the layup and everyone in the stands started screaming and I felt so proud,” Manson said.

From her time, Manson has learned valuable lessons regarding team comradery and how it can carry off the court.

“I would say [my favorite memory] is that I was always around a good team,” Manson said. “Through that, I have learned a lot of what it means to communicate and work with others.”

Manson is no stranger to adversity, especially when it comes to overcoming doubts regarding her place on the team.

“I went through a long period of time when I felt like people around me were always better than me. I thought that I was not needed on the team, so I thought a lot about quitting the team. Eventually, I realized that my role was more than just playing time. I knew that I could stay on the team to support them and help other ways,” Manson said.

In addition to improving her self confidence over her career, Manson has also taken the time to improve her skill set. Manson recalls attending every open gym she was able to and stayed after practice to continue to work on her game.

“During my freshman year, I barely knew how to dribble. I think over the past four years when I went to open gyms and learned from different coaches I was able to get better,” Manson said. “Basketball taught me to not give up. I learned to face my challenges and keep working to change the outcome.”

As potentially one of the only seniors returning to what would have been the 2020-2021 team, Manson knows that, through her experiences, she had valuable advice to offer younger athletes.

“I would tell [a younger basketball player] to not give up. There are times when you feel as if the only thing you want to do is stop, but it pays off to keep your head up and push through,” Manson said.

Although Manson knows her time with the team is coming to an end, she is grateful for the experiences she has shared with her teammates who will continue on to be her friends off the court.

“It is very sad to be leaving this program. I am going to miss being with the team and having fun in the locker room before games and just goofing off with the team.”

Although she has not yet officially decided where she wants to go to college, Manson has high hopes for the future and fulfilling her dreams.