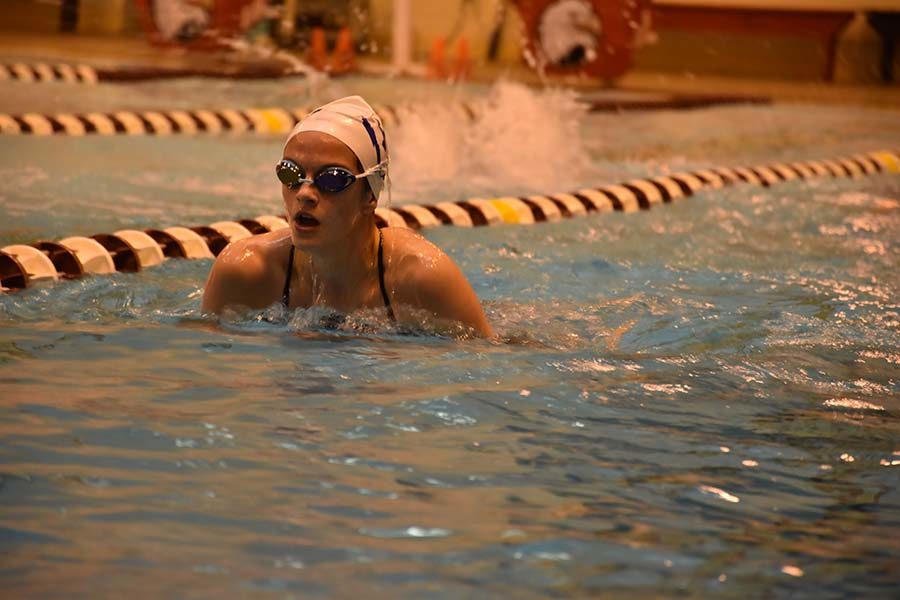 As both of her sisters went through their high school careers running year round, senior Isabel Campillo decided she wanted to pursue swimming during the winter instead. Although Campillo ended up running both cross country and track by her junior year, she considers swimming her main sport.

Although Campillo started swimming when she was four years old on the summer league swim team, the Spotswood Dolphins, she had always loved being in water.

“I actually always liked the water for some reason, like when I was two years old, we ran [into] the beach and I’d be running in the ocean just for fun. My parents pretty much put all of us siblings in the swim team and then Molly and Abby enjoyed it. [My sisters] enjoyed running more but I definitely enjoy swimming more than running,” Campillo said.

With 10 years of summer league swimming under her belt, Campillo decided to try swimming at the high school because of the numerous pleasant things she had heard about the team.

“I think it’s a good team because we aren’t extremely competitive with each other, or at least not like what I’ve seen, and unlike a lot of [sports]it’s both individual and a team [based]. We can all kind of support each other when we each have a good time and we can also support each other’s relays, and I think having the relay races are a little extra fun. Everyone has their own goals and times and like how at the beginning of the year we all kind of spell out our goals we want and we’re just trying to help each other, achieve those goals,” Campillo said.

“I absolutely love Morrell. I think he is super fun and just really an encouraging coach and he really cares about your own personal best and he wants you to kind of succeed, even if that means you’re still not as fast as everyone is. He just really cares about you, and he makes [practice] not too easy but it’s low pressure enough where it makes it really fun. I’m definitely gonna miss him. Especially now that he’s retired [from coaching],” Campillo said.

The swim team doesn’t categorize training groups or buses by gender like other sports teams on campus. All genders practice together and compete in the same meets.

“It offers a wider variety of personalities, and it’s definitely really fun. I feel like there’s not too much of a divide between the girls and the boys team. You can kind of just support both teams,” Campillo said.

Campillo appreciates the team traditions that have accumulated over the years. From a co-ed secret buddy system to a huge girls sleepover, the team hangs out a lot outside of practice.

“[My favorite part of being on the swim team] would have to be between team dinners and get-togethers, and then the bus rides home. I just feel like they’re good bonding moments where you can be with the team, get to know people and kind of, spend time with them other than just being in the water. I feel like [the girls] have always been a close knit [group] and [having sleepovers] just seemed like a fun activity to do. I think last year we had one or two. I just feel like it’s a good time to all bond and even though we love the boys on our team it’s kind of fun to just be with all the girls,” Campillo said. “I’m going to miss secret buddies. It was so fun to not know [what] you’re going to get every week. Even though it’s like a secret buddy it kind of establishes a special relationship with someone, and it’s just kind of like a fun little thing to give someone your present to give to someone else and it’s just really cute.”

During her junior season, Campillo encountered a challenge she didn’t think she would have to overcome. After feeling extremely tired from practice and her stomach hurting, she discovered she had Mono.

“The end of junior season I found out I had Mono, which is kind of hard because I missed out on the last few weeks of the season. I couldn’t overcome that because I just had to wait it out, but I tried to be involved in team activities and came to support people at meets, so it was definitely weird not being able to compete, but it [was] also kind of like fun to be a spectator,” Campillo said. “[That time in my life] was weird because I felt like my times were getting worse and I was just really tired after every practice. I’d just want to fall asleep right after practice. My stomach would kind of hurt, and once like that happened for a while I knew that something was up. It’s really really sad because I loved going to practice and being on the team.”

Campillo lost one and a half of her high school swimming seasons. If she were able to compete this season, Campillo was excited to experience senior privileges and improve her times from sophomore year.

“It definitely would have been fun to be captain and kind of like helping lead the team. And I would have liked to improve all my times. [My best event is] probably the 100 freestyle I feel like I was dropping time every race I did, which is good. I feel like I could have dropped a little bit more time this year,” Campillo said.

Swimming requires discipline to continue going to practice, especially when it is below zero walking outside entails frozen hair, equipment and cars, because of this Campillo got a lot of mental stamina from swimming.

“You don’t have to be the best on the team to feel accomplished and you can still feel like you’re contributing to like the team as a whole. It’s given me a little bit more of mental stamina, I guess, because like when you’re in the water for like an hour or more you’re just kind of in your own thoughts and just learning to kind of just enjoy every moment and being in the water. Knowing that like every lap you’re doing is improving you a little bit, kind of helps my overall thought process. Just working hard for your goal. I think that when it comes to schoolwork and I’m so close to finishing I just like to keep pushing. Every paper I write will make me a better writer and stuff like that,” Campillo said. “It’s [also] made me more of a team player and wanting to kind of lift up others in the team, and even if I don’t have my best race that day it’s like somebody else needs their time like you’re happy because it’s a win for the team. I think it’s just kind of that teamwork mentality.”

Campillo plans to continue swimming on the University of Virginia club team next year. Overall she thoroughly enjoyed her experience on the HHS swim team and encourages anybody who wants to swim to try it.

“I definitely think that more people should join, especially, I feel like something like football or other sports like you have to have experience you have to be really good and you have to know how to play really well. With swimming we had one year where there was a girl who literally couldn’t swim at all. I feel like more people should know that Morrell or, I guess, a new coach now will take you from the ground up and teach you,” Campillo said.