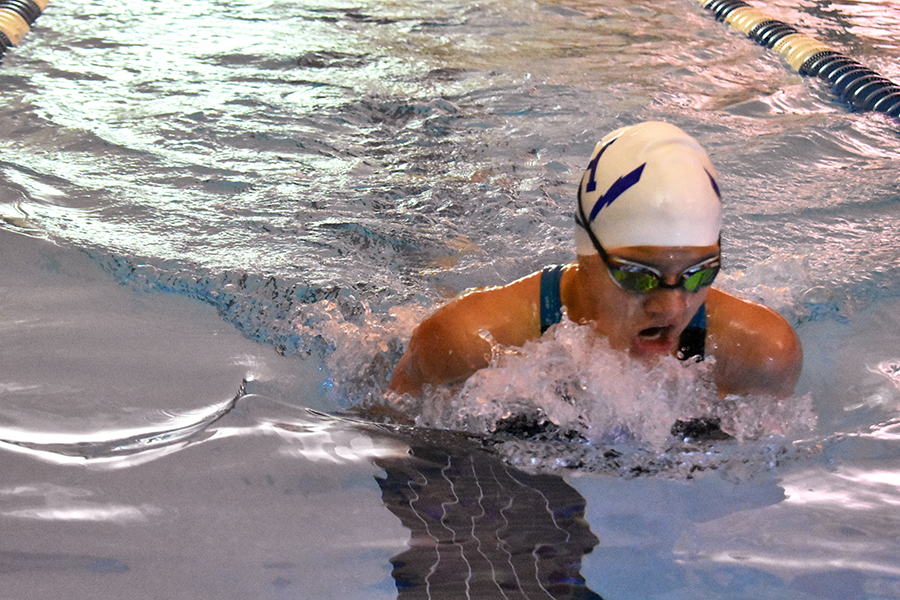 Junior Mia Constantin swims into the wall for her turn.

After swimming on the local club team, The Virginia Gators, for a majority of her life, senior Mia Constantin decided to continue her swimming career in high school.

“I [have] been swimming since I was 7 years old. My eighth grade year was transitional for me in my sport. It was an interesting transition on to the high school team because I was considered an underdog,” Constantin said.

After transitioning to the high school team, Constantin persevered through the face of adversity on many occasions.

“I’ve grown in the sense that when I was younger, I was really negative to myself and I didn’t have a lot of passion in the sport,” Constantin said. “[However], joining the high school team helped [me] regain that passion and realize this is something I might want to do in college.”

Constantin has also had many embarrassing moments over her four year swimming career. One that stood out to her the most was during her freshman year at a districts meet.

“[In my junior year,] I was slated to swim the 200 [yard] individual medley and the 500 [yard] freestyle [at the districts meet]. I had swam my first race and I thought I had a while until my second race, the 200 IM, but I actually didn’t. Someone had told me the wrong event was [racing], so I was talking to my friends instead of being behind the block.” Constantin said. “Someone finally looked at me and said, ‘Aren’t you supposed to be on the blocks?’ In that moment, I looked over, and I saw my heat [getting] ready to dive in. Panicking, I grabbed my cap and goggles and sprinted to the blocks getting on them right as the event was started. I think I got second or first in that race, but it was the closest I had ever been to missing my event.”

At one point during her freshman year, Constantin considered quitting swimming for distance running. Keeping up with classes and her sports was one of the biggest challenges.

“I had felt extremely tired my entire freshman year, and I was barely keeping up with all of my classes because of the amount of athletic activity I was doing,” Constantin said. “I loved running, but at the time, I felt like I had a better chance to make it to college as an athlete with swimming because of my coach. During the period when I was experiencing many coach changes, I was seriously considering quitting and going back to running, but in the end, I stuck with it. I love the water and I love my teammates, so I’m glad I stuck around,” Constantin said.

Constantin has struggled with calming herself down before her races. One of the ways she has found to help her the most is dancing beforehand.

“I have really bad racing anxiety, and although I still haven’t overcome that, I’ve gotten better at learning how to manage my emotions before [races]. I do the Renegade behind the blocks a lot just because that helps calm me down for some reason. It helped me not be as nervous and just enjoy the moment,” Constantin said.

As well as dancing, Constantin also talks to people to help lighten her mood before her heat.

Although Constantin has many memories from her swimming career, her favorite is from the regional meet during sophomore year in the 100 yard breaststroke.

“I had not made states my freshman year, and I really wanted to. I could barely breathe before [my race] because I was really anxious. I stepped up on the blocks, I swam and I made states by 0.1 of a second. I just barely touched ahead of a person. That was the first time in my swimming career that I really performed well under pressure. Regionals were really a turning point in my swimming career,” Constantin said.
Swimming has affected Constantin’s life in many ways, currently though the biggest difference is in her sleep patterns.

“I wake up and go to club swim team practice from 5:30 a.m. to 7 a.m. That is a really big thing in my life because I have to wake up for that, and although I’m tired, it also does help me wake up for school and gives me [about] an hour before my first class,” Constantin said.

Constantin’s swimming schedule with her club team is still able to go on despite the COVID-19 pandemic.

”I am currently training with my club team, the Virginia Gators. We started up again in the summer where everybody wears a mask unless they are in the actual pool. We were able to do this because we split up our already small team so we have at most 18 people in one practice. I practice from 5:30-7 a.m. because it works better with my schedule,” Constantin said.

Throughout the years, Constantin has had many coaches; however, she has been able to make long lasting friendships with some of her current coaches and teammates.

“On my club team I had [about] eight coach changes in two years. [Morrell, my swim coach for most of high school], helped me get to states my sophomore year. I dedicate that state’s qualifying all to Morrell, and I’m really sad because he did retire. With my teammates, the swim team has a really infectious atmosphere; we all really like to cheer each other on. I really appreciate the teammates, and they’re really why I even stayed in this sport in the first place,” Constantin said.

Constantin believes having so many coach changes may have had a negative effect on her swimming abilities.

“I am a strong believer that the best athletes have consistent training, which comes with having a consistent coaching staff. I believe that if I would’ve had a consistent coach, I would’ve been a better swimmer. Overall, I have become a tougher person because of it. I also learned how to take care of my body and what training gives me the best results. If I didn’t have these coach changes, I wouldn’t have been as adamant about swimming in college,” Constantin said.

Making states has always been one of Constantin’s biggest goals with swimming. During her sophomore year, she achieved this goal and continues to set high standards for herself in high school.

Constantin was able to compete her junior year right before the COVID-19 pandemic hit; however, she didn’t get to meet all her goals she was hoping for.

“I was one of the lucky few swimmers that finished their season right before lockdown. My last meet junior year was Senior Championships, or club states, and that took place the weekend before March 13 or lockdown. I was planning on qualifying for a bigger meet in Florida, but I wasn’t able to do that. Overall, I improved all of my times slightly during my junior season, but I still wish I would’ve gone faster,” Constantin said.

Swimming has given Constantin the mindset of putting in the work to get the things you want.

“My biggest takeaway would be working hard because swimming takes a lot of effort to do. What I’ve learned from it is you have to work hard to get what you want, and I’ve also learned that even though it’s not a team sport, you still have a team,” Constantin said.

Constantin has several role models in swimming; however, she feels as if olympic swimmers aren’t her biggest role model because of the lack of personal connection with them.

“I have had different role models throughout the years. One of my role models was Lily Gusler. She was always really good and really relaxed before her races. I had a coach who had swam in the Olympics; her name was Rami. She was also one of my role models in the sport. She [made me think] I could do this if I really wanted to, and I could go to the international level. She said this can happen, but you have to work hard,” Constantin said.

Constantin’s advice to younger swimmers is to simply go for it. She also feels swimming can really help you get into college.

“[My advice is], don’t be scared if you don’t know how to swim because you totally have the chance [to learn]. The people who were on the swim team years prior are more than happy to include you. We’ve had people who didn’t even know how to swim just try. It’s just a really inclusive community. I would also say if you like swimming, join the club team. [You will] get faster and use it to get into college because it quite honestly offers such a big benefit. I would suggest that to anybody who’s doing any sport and is willing to go D3, D2 and find a good school for their fit in those levels or even D1 if they can do it. If you can go to college for a sport, do it,” Constantin said.

Next year, Constantin hopes to swim in college. She doesn’t know where yet, but is focusing on academics and making sure she is keeping her grades up.

“Next year, I hope to swim in college. I have talked to a few schools, [but don’t know where I’m going to end up]. [I want to go to a school where] I would be in the middle of the pack. I want to be able to work up to something,” Constantin said.

“[Swimming has] really helped me in the college process which I didn’t realize. I wanted to focus on my academics [as well as swimming],” Constantin said.

The ultimate dream with swimming for Constantin is to swim in Romania, her parents’ home country. She admits this will take a lot of work and doesn’t know if it will be able to happen.

“For a while, I wanted to swim in Romania, which is my parent’s home country, but I’m not yet good enough to do so. If my college career goes the way I want it to go, I might be able to, but I wouldn’t want to swim professionally for long because it is really hard to do,” Constantin said. “I think I would like to continue swimming on a Masters team, but I don’t think I will continue it as seriously after college.”

Constantin has big academic goals outside of swimming as well, including several career options.

“I really want to be an engineer, it’s been a dream of mine ever since I was six years old. For awhile, I wanted to work at Apple, but after I became more interested I wanted to become an environmental engineer. I’ve also always been interested in space and the building of space shuttles and satellites, as I was exposed to this at a young age by my mom who is an astrophysicist, so I don’t quite know what type of engineer I want to become yet; however, I have a few leads and I have time to decide.”