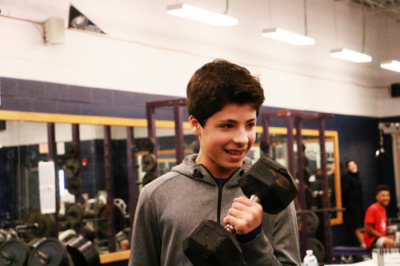 Q: Describe your favorite memory, or moment in your sport.

A: I would say the district meet from this year [was my favorite moment. We ran [the] four by two, we came in second place. Leading the packs, being up front. And, having everybody cheer for you. We were all satisfied with our placement afterwards.

Q: What part of competing was your favorite?

A: The rush. The rush of running, competing, and seeing everybody cheer for you. knowing that you can catch the guys in front of you, It’s pretty exhilarating.

Q: What is your biggest takeaway that you have learned from track?

A: I would say cooperation. There were a lot of independent events so it was definitely the team events [that taught me cooperation] . [There is a lot] of effort on everybody’s part and if you didn’t really share that effort you’re kind of one sided, and you didn’t really do well. [I learned] about a lot of teamwork and cooperation and it’s nice to be with everybody.

Q: Was there a specific person that helped you learn teamwork?

A: I wouldn’t say there was a specific person, but was [would] definitely [say] my teammates, they were really cool.

Q: Describe a challenge you encountered in your sport and how you overcame it.

A: I don’t know if we really overcame it, but we definitely handled it pretty well. The challenge we faced was that we didn’t qualify for states. We were really disappointed with the result. We  overcame it by recognizing that we ran regionals, and we said that was good enough and that we’re very proud of that. So I would say qualifying for regionals was definitely a challenge. When we recognized that we made it to regionals and we put in a lot of effort [we were able to overcome it].

Q: How many years have you been doing track?

A: I was only able to do two. Since Corona canceled winter sports..  It has been since my sophomore year.

Q: Was not making it to regionals more disappointing your second year?

A: Definitely, the second year, all of us were a lot better. We had a lot more capability of doing better. A lot more potential than the first year.

Q: Have you grown in the past three years?

A: Yeah, I would say so. I definitely enjoyed competing more.

Q: What events do you run?

Q: And would you explain those to people who don’t know track?

A: The 55 meter dash is just a sprint on the straightaway. The 300 meter dash is running 300 meters around the track. So it’d be one lap and a half. A four by two would be a relay with four members that each run 200 meters.

Q: How has your experience and your work contributed to who you are now?

A: I would say I’m definitely a much more social person. Because being with and being able to talk to all these awesome people is really cool. [It’s made] me be more friendly with other people.

Q: How have you progressed?

A: I am definitely a lot faster than when I started. I feel a lot more athletic.

Q: Where are you in comparison to your friends?

A: I am the second fastest. The fastest would have been Isaiah Hamilton. And then the 55 meter I don’t know, because I don’t usually run the 55.

Q: Does your family usually come to watch your events?

A: Not really, because it’s a lot of indoor and they’re kind of far away, maybe because my mom lives in DC. And my dad, he has to work a lot. The fact that there’s not really any indoor tracks around here besides EMU and JMU means that it’s kind of hard for them to come.

Q: Do you wish they would come?

A: Of course, I would love to see him, but I completely understand.