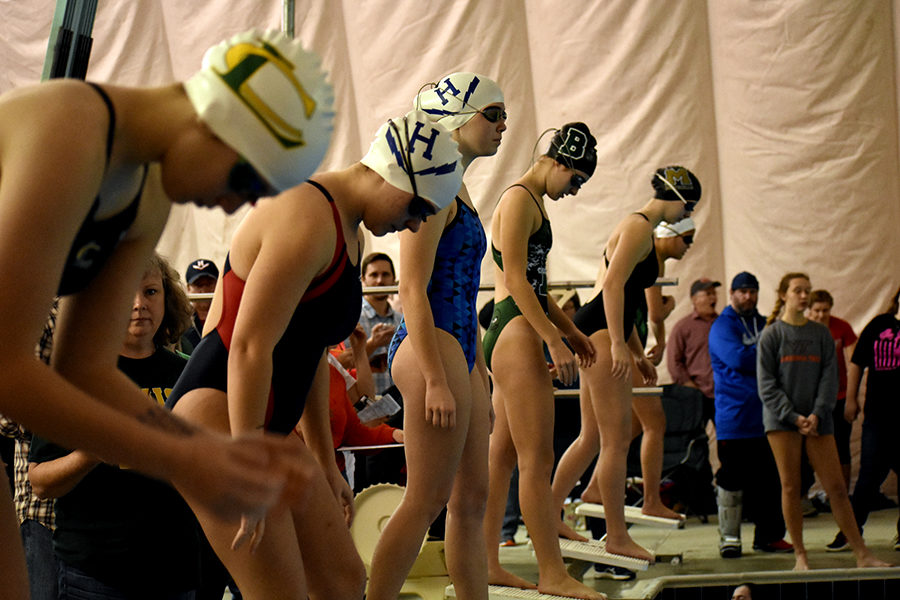 Senior Christa Cole (left) and sophomore Emma Lankford step up on the blocks before competing in the 100 Yard Freestyle.

Q: What is your favorite moment from swimming?

A: I’ve actually been [swimming] since I was six years old. I have been in swim for quite a long time now and it’s really hard to pick a favorite memory. In my time on the high school team, I think one of my favorite things that I remember is, when we went to the meet [that] we would go to every year in Christiansburg. One year, everyone had personal bests from that meet. We were all really proud of ourselves. When we were coming back on the bus, we were just all celebrating and laughing. It was a really good feeling for us all to be so happy with how we did and to be able to celebrate it together,” Lankford said.

Q: What teams were you on before high school?

A: The whole time I’ve been swimming, I’ve been on the Westover Waves swim team, which operates from Westover pool. I started in the super young group where basically all you do is just try to float. It’s about 10 years later now, [and] I’ve definitely come a long way since I was six. Now, I will not now because of COVID, but in the past several years, [I’ve] been a junior coach for the team, which [means that] I would work with kids eight and under, and help teach them how to learn to swim, or float, or whatever they can do based on their skill level. It’s really a fun experience overall, and I’ve enjoyed it a lot.

Q: Why did you stop swimming last year?

A: I would have actually kept doing it this year. Last year, the problem was that I was involved in a lot of things. I was spreading myself a little bit too thin. Swim practice every day after school and I would have other clubs that would meet. It would have worked out fine if I could drive because then I could just come late to practices. [However] I couldn’t drive because I’m kind of young for my grade, because I started school early. I didn’t get my license until right before quarantine hit which was after the swim season. I could [only] go to about one practice a week. I kept going to as many practices as I could because I love to swim, but I wouldn’t really say that I was as committed to swim last year as I have been in the past. I wish I could say otherwise, but it’s just how things worked out.

Q: What challenge have you overcome in swimming?

A: One thing that I’ve always had trouble with in swimming is getting over pre-meet nerves. I always get pretty nervous. I [get] a little queasy before competitions of any kind and swim was always especially bad for that. Basically, I have learned to deal with it better, but I still haven’t gotten over that. I can’t eat on meet days because I feel extra nauseous if I do that. I have found that telling myself that no matter what happens, it’s okay [has helped]. The support of my team has [also] really been helpful to make it less nerve wrecking and a little bit more comfortable before meets.

Q: How did your team support you?

A: I wasn’t really too involved last year, but even last year and in the years before that, the support from the older members on the team was super helpful because we did this thing called secret buddies, where you would get a secret buddy, kind of like secret Santa. Basically, every meet your secret buddy would bring you like Gatorade, and just fun little things like fuzzy socks. It really helped cheer everyone up. Also, we would have team dinners the night before meets when we could, and just talking and having fun the night before a meet was really great to de-stress and bond with the team, which made it a lot better at the competition the next day.

Q: How do your meets go?

A: A lot of our meets are actually held at Westover in the bubble because it’s always during the winter. There are a couple of invitationals where we drive to Charlottesville, or Christiansburg. We’ve driven to Waynesboro and Winchester for more local meets that are in the regular season that aren’t invitationals. A lot of the teams come to Westover to have meets anyways, so we end up having a lot of our meets there. When you get to the pool, you are kind of just waiting around for a little bit until it’s your team’s time to warm up. Then you do a 300 freestyle just to loosen up and get ready to swim. Then you do some dive practices and turn practices. If it’s a new pool, you can get a feel for how the diving blocks are and if any of them are wobbly or stuff like that. With turns, you can figure out distances from the wall and where the flags are placed, which is really helpful if you’re doing backstroke. Then it’s kind of just a waiting game for when your events get called. Then you line up behind the blocks and get ready to go. I would always participate in the 100 breaststroke, the 50 freestyle, the 100 freestyle, and usually the 100 freestyle relay.

Q: Hardest stroke for you and why?

A: The hardest stroke for me is butterfly, which is a pretty common hardest stroke, I have to say. For me, I’ve always struggled with endurance. I’ve always been a much better sprinter than a distance swimmer. Essentially, it’s hard for me because it’s not strength or endurance, it’s both, and it hits pretty hard the whole time. The breathing pattern is a little difficult to get into. If you’re feeling tired, it’s often hard to be able to actually have the strength to bring yourself out of the water to take a breath. If you’re not breathing, then you get more tired. It’s almost like a feedback loop with me in butterfly where I get tired, and then I can’t breathe, which makes me more tired.

Q: What is your favorite stroke and why?

Q: How do you get disqualified/ have you ever been?

A: I have gotten disqualified once. It was the first time I was competing in the individual medley, or IM over the summer with Westover [and] I got disqualified because of my turn. One thing with breaststroke that you have to do [is that] both of your hands have to hit the wall at the exact same time. With the IM, I don’t remember if I was finishing breaststroke or butterfly, but at the end of one of those, I was turning into either backstroke or freestyle, whichever one would have been next, but I used one hand to turn in that disqualified me. With breaststroke, there are three main ways that people get disqualified. The first one is the two hand touching thing, a lot of people only touch with one hand, or they forget their second hand or they don’t touch at the same time. Any of those things will get you disqualified. The second thing is that you can’t bring your arms down below your waist while you’re swimming. They have to stay kind of up in a little box around your chest area. You can’t bring them any further down. And especially with the little kids I coach, they tend to bring them all the way down to their thighs. The last thing is a scissor kick, which you don’t want to [do]. That’s what a lot of people do to get them disqualified. Your legs should be moving like a mirror, almost like a frog in a circle, whipping motion. A lot of people tend to move them slightly asynchronously and cross over a little bit, which is called scissor kick. That is something that’s easy to do, and it gets you disqualified. I know a lot of people that breaststroke doesn’t come naturally to them, and they have a lot of trouble with that.

Q: What was your biggest takeaway from swimming?

A: One of the biggest takeaways I learned with swimming is definitely that you don’t have to be the best to get something out of it. I’m not going to tell you that I’m the greatest swimmer that’s ever lived. I definitely would not consider myself to be a great swimmer, but I’ve kept doing it because I love doing it, not because I think that I can win an Olympic medal in it. I think that if people tried to do sports that they wanted to do instead of ones that they thought they were good at, it might be a lot more fun to do the sport just because you’re doing it to get something out of it for yourself instead of to get a reward out of it.

Q: How have you grown as a person by swimming?

A: I think that I have definitely grown quite a lot over that time. I really couldn’t tell you how much of it is directly attributed to [swimming], but I can say for sure that having so much positive support from my Westover team and my high school team with swim has made me a lot more confident and more accepting of my mistakes.

Q: How has swimming contributed to who you are now?

A: I used to be pretty hard on myself and to some degree, I still am. I would definitely say that just learning through swimming, how to say that I can make mistakes, and I’m not always perfect all the time and I don’t have to be. [Swimming] has really helped me to [be] more positive about things in life,” Lankford said.

Q: Why did you start to swim?

A: It was actually kind of funny. One of my best friends at the time had started swimming and she showed me a ribbon that she got and I was like, “I want ribbons, too”. That’s why I actually started [swimming]. Definitely that is not the reason that I have [stuck with swimming]. But for a six year old, looking at trophies and ribbons was very attractive.

Q: Why have you stayed with swim all these years?

A: It’s a combination of things. Part of it is that I like doing the exercise, and I think that [swimming] is almost therapeutic. Another part of it, probably the bigger part of it, really is just the community that I’ve become a part of with swim. I’ve been on my summer league team for 10 years now. The coaches have watched me grow up. I’ve gotten to know them, and they know me. Now I’m coaching and I’m getting to see people that were how old I was, go through the same thing and learn to love it. That’s really why I’ve stayed with the sport; because of the community that I’ve gotten to be a part of.