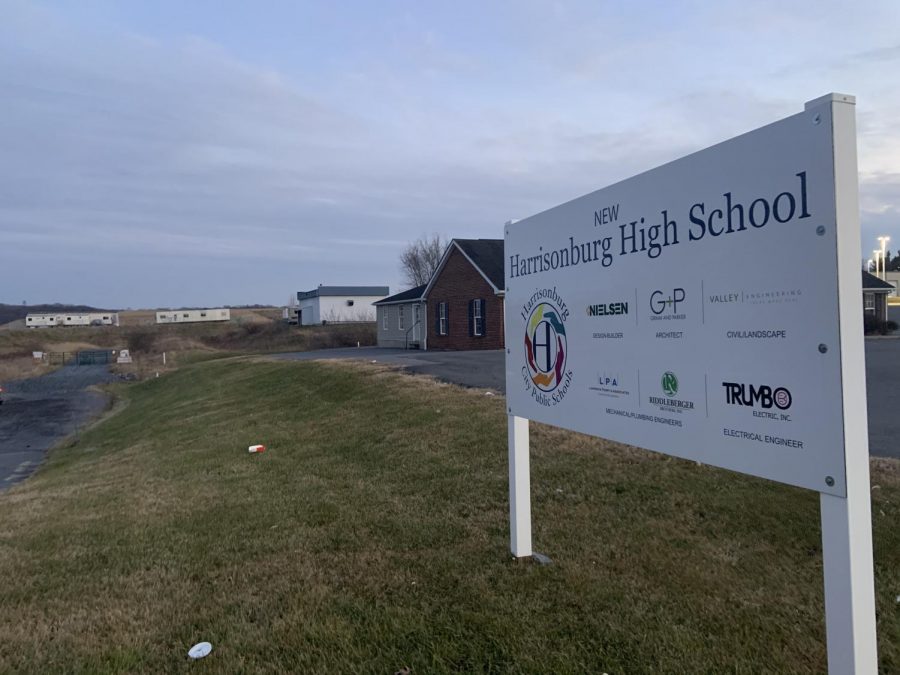 The building site for HHS2 is located between South Main Street and Interstate 81.

Construction of HHS2 Set to Resume in June

Superintendent Dr. Michael Richards addresses his plans for the second high school to continue its build as well as the phasing of select students into in-person learning.

After the Harrisonburg City School Board voted to suspend the construction of the second high school eight months ago, HCPS superintendent Dr. Michael Richards, Executive Director of Operations and School Safety Craig Mackail and HCPS officials hope to resume construction in the upcoming months.

“[The progress of the new high school] is a big question and a very important one. On Jan. 8, the Harrisonburg Education Foundation asked about HHS2 during one of our meetings; it’s on everyone’s minds. Over the summer, the city manager and I made a recommendation to our two governing bodies [that] we feel like this is going to be too much of a burden on our residents who pay property taxes and on our small businesses. This was back when the coronavirus pandemic and closed everything down. Businesses were not really making money, people were worried that they’re gonna lose their jobs, some people were furloughed [and] other people actually lost their jobs completely. We decided that we would recommend to our two governing bodies that we put it on hold,” Richards said.

Although Richards and Mackail decided it was best to suspend building on behalf of the city, it was not an inexpensive decision and came with careful consideration.

“We originally were going to pay the builder close to $600,000 to close down and stabilize everything. Our city ended up doing some of that work and saving some money, but it was still expensive. [However,] it was a lot less expensive than it would have been if we had kept going,” Richards said. “The bond market at the time was very, very volatile because no one knew what was going to happen with the economy. Interest rates were fluctuating all over the place. The city manager and I and the two governing boards decided it was a bad idea to keep going at that point. So we used money, and the city had to shut down the project.”

While HCPS officials faced challenging decisions, Dr. Richards, City Council, and the school board have all begun to formulate a plan that allows for construction to resume on the new high school in early June.

“The goal is to start the project backup before a year has passed since we shut it down. [That means] we have until the June time frame to get it back going back up and going and that’s our goal. The school board and the City Council have already approved the plan and are getting the bond [and] money for it. We need to make sure that finances are stable in the city and then start it back up. The builder worked very well with us in terms of understanding our need to kind of protect the residents of Harrisonburg from financial stress. I think everyone cooperated and now we just have to all do the right thing and cooperate to bring the project back up and running,” Richards said.

With hopes of resuming construction in the spring, Richards estimates that the school will be ready to open prior to the fall semester in 2023.

“When you start a project, the project managers create a schedule, and they know when the foundation will be done, the walls, the roof and all that, right. That’s dependent on the availability of materials, which depends on the point in history that you’re in,” Richards said. “When we started the project, the acquisition of materials may have been different than when we are in the spring when we get the project back up and running. The schedule may end up being different, but as of now, we estimate opening in fall 2023.”

Due to the evolving and changing nature of the pandemic, Richards reviewed the plan for the infrastructure of the new school. Although the original design was not meant to be pandemic proof, Richards is fully confident in the layout of the new high school as it pertains to being able to safely attend school.

“The building at HHS2 is being built with lots of air circulation and bigger rooms. The classrooms are bigger than the ones over at the current high school. We also designed it with lots of exterior spaces like we’re trying to do now. We’re trying to retrofit our schools now with that exterior space. We’re gonna design little amphitheaters and little pavilions with seating and external restrooms and clinics and things that can be used outside of schools. [The new high] school actually has all that great stuff; we just have to use it. Once it’s built, we’re going to have a little amphitheater near the pond, [and] we’re going to have the bike trail that goes not only through the campus, but into the city in a very safe location. [The new high school will have] an outdoor cafeteria attached to it and two courtyards. We have already designed a pandemic proof high school. We did not know the pandemic was coming, but we built a good place,” Richards said.

Currently, there are many uncertainties surrounding if students in the city school district will be able to return to in person learning at any time during the second semester. However, Richards and his fellow HCPS officials have high hopes for allowing students to return in person. Although the school has slowly brought back students and enforced mask wearing and social distancing at all times, attempting to bring back the entire student body is another challenge.

“We put [the phasing in] plan in place before we knew that the vaccine was coming in February. In fact, when we put that plan in place, we didn’t even know a vaccine was coming this quickly, so we’re actually very excited. If we can vaccinate all the teachers and support staff in February, then we may be able to shorten that,” Richards said. “I take that with a grain of salt because we’re in a very, very bad place right now with the pandemic. The numbers are off the charts. They’ve never been this high. [The pandemic has spread] across the whole city, [and] our city is no exception, and it’s considered highly risky. If you have more than 200 cases per 100,000 people over [a period of] 14 days, then you’re in [the] highest risk [zone]. We’re currently at 900 cases [per 14 days]. I’m hoping that after the surge post- holidays, the curve comes down quickly. [I am also thinking that] as it’s coming down, it [will meet] the vaccine, which [will keep] it down, and then we can all get back into our buildings and into these outdoor learning sites.”

At the current high school, the building is overwhelmed with close to 600 students above the architects standards. While this does still comply with the fire marshal requirements, Richards acknowledges that this presents a significant challenge when it comes to ensuring social distancing in school.

“[The high school] was safe before because the standard before the pandemic was the fire marshal standard. Within that, the architects who designed it said that it’s comfortable for 1300 students, and we have 1900 right now. It doesn’t mean it’s dangerous in terms of the fire marshal standards, but it means that it’s too crowded for a pandemic,” Richards said. “Dr. Anthony Fauci and others have told us that, even after you’re vaccinated, you still have to wear masks and social distance. It’s gonna be hard to get high school back fully. However we’re going to prioritize seniors having in-person experiences for the past year in school once the surge comes down a little bit.“

Despite the challenges presented in the rephasing plan, the city schools have already been able to successfully bring back select students who are in need of academic support.

“We’ve already brought back a lot of students who were struggling academically. They’re in the area outside the auditorium, and they’re spread out. They’ve got adults who are mentoring, walking around and helping and so forth. In case there’s someone out there struggling who wants to talk to their counselor about coming in, they get reliable WiFi, a quiet place to work and an adult to help. When we do bring back the [students in the] high school, it’s going to be slower than the other schools,” Richards said.

Although the students have benefited from having the opportunity to learn in person, Richards has experienced first hand having to remind students to do their best to maintain social distancing while in school.

“I’ve been [in the schools] many times looking at the situation and kind of mingling six feet apart from the students, and the only issue is what we’re doing for sanitization reasons is between classes. We have crews that go in and do some sanitizing. During that time, students are in the hall so I have had to remind them not to hug each other all the time,” Richards said.

While the 2020-2021 academic year has been challenging for all students, Richards knows that the younger students benefit from less time online and wants to get them back in person as soon as possible.

“[The younger students] don’t spend as much time on synchronous learning as [high schoolers]. I’m getting [positive] feedback from the whole community with the online learning situation, but it’s not ideal. We need to get into the buildings and these outdoor spaces that we’re going to build,” Richards said.

Although he is dealing with many aspects of adapting to the rules and regulations of the pandemic, Richards is motivated to find a safe way to get students back in school and  is looking forward to the opportunities that the new high school will provide the community.

“[In the new high school,] students will be able to take classes at either [high school]. We don’t want to create an our city where we’re so concerned about everybody getting a fair shake. The current HHS is going to have advantages over the new high school. Our goal is that anybody who wants to do the Fine Arts Academy is going to be using the old high school to do it even if they’re assigned to the new one,” Richards said. “That’s the kind of thing we’re looking at is sort of sharing the space because they’re only three miles apart. Overall, my dream is to just watch the faces of students coming into that building because it’s going to be a beautiful learning space.”