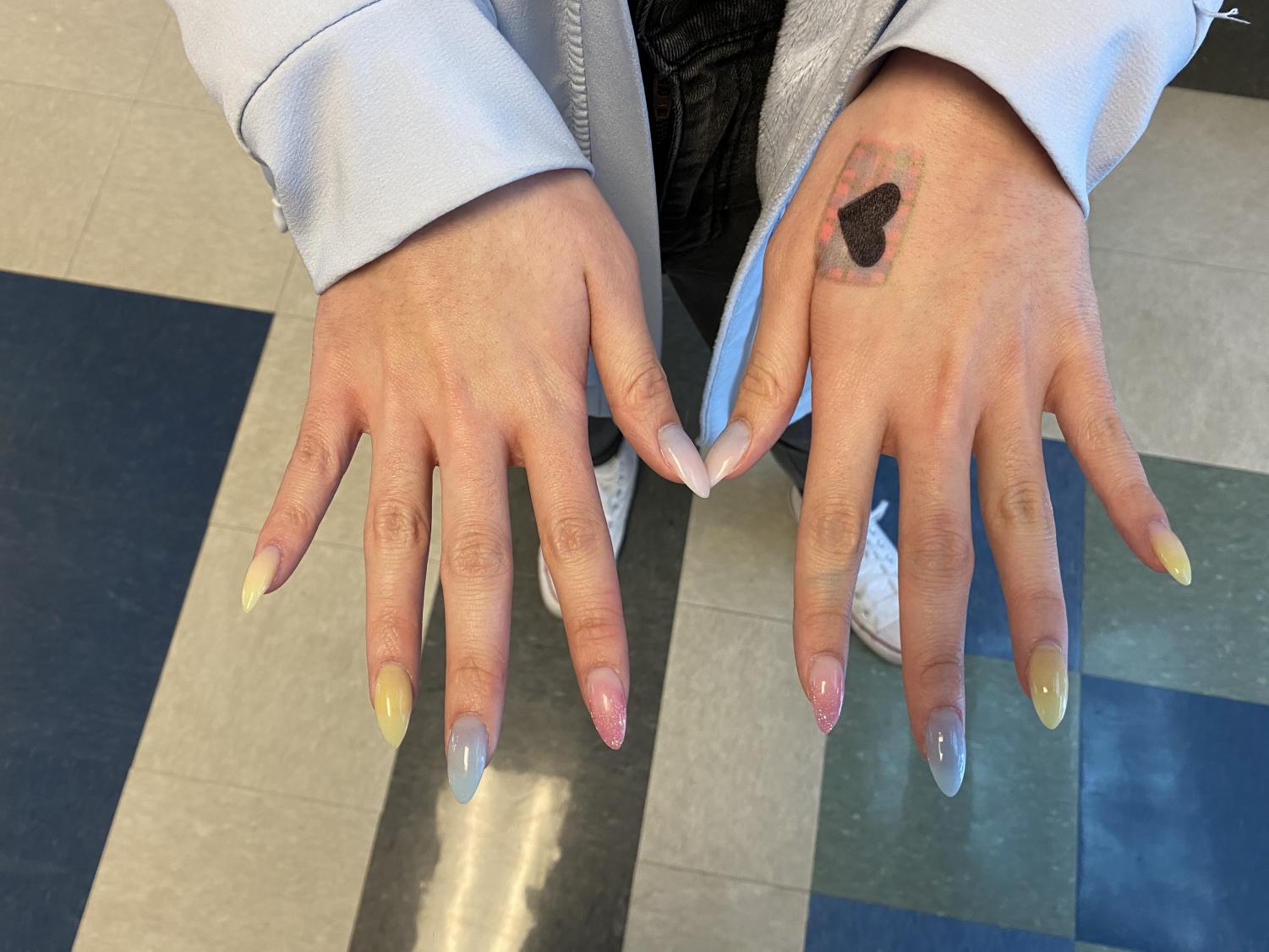 Junior Emily Nguyen enjoys different colored nails like this set. She likes to be creative and enjoys the way acrylics make her feel more confident about herself. (Lucia Gabel)

Junior Emily Nguyen enjoys different colored nails like this set. She likes to be creative and enjoys the way acrylics make her feel more confident about herself.

Students at HHS and their nails

Various students at HHS customize their nails in different ways and for different reasons. Read about how students keep up with their nails.

Some find that a new set of nails makes them feel confident and bold. Others hope that it shows a little extra spark of personality, but for most it can just make you feel a little bit fancier. For junior Emily Nguyen, she has practically grown up in a nail salon. Nguyen’s parents own Star Nails in downtown Harrisonburg. Nguyen finds that after spending so much of her childhood observing her parents, she wanted to join and learn more about her parent’s work.

“I’ve grown up with it all my life. Since I’ve watched my parents, I want to get involved too and then I just want to do it myself,” Nguyen said.

Over the years, Nguyen has slowly learned to do more advanced things with her nails. Nguyen has worked on perfecting her regular painting of nails and toes and has practiced with applying acrylics.

“I’ve done [acrylics] on my brother many times as my test dummy and also on my cousins,” Nguyen said.

Nguyen finds that, for her, acrylics are a way for her to feel confident and can show that after working hard at something, she was able to accomplish something as difficult as acrylics can be. She also finds that she simply likes the way her nails look more when she is wearing acrylics.

“If you do them right they look really pretty and it’s really satisfying that you did that yourself,” Nguyen said.

While Nguyen enjoys doing and having acrylic nails, she also recognizes that they can be a pain both literally and figuratively. Nguyen has had to find different ways to do common things that she now has trouble with because of her acrylics. Nguyen also finds that spacing out the time that she has acrylics on, helps her keep her nails healthy and looking good. She recognizes that while they are pretty and fun to have on, it can be dangerous to have them on all the time.

“It’s really pretty when people have them and it can boost self-confidence, but some people don’t like them because they do get in the way sometimes when you’re doing everyday tasks,” Nguyen said.

Nguyen shares her insight that she has learned from spending lots of time around a nail salon and from personal experiences herself.

“I wouldn’t get them done over and over and over. If you have them for a while, take a break for a couple of months and then you can get them again for any special occasion.”

Q: What are some hard things to do with your nails?

A: “Some hard things to do are typing on my Chromebook, but also putting in and taking out my contacts.”

Q: What are some easy things to do with your nails?

A: “Writing is pretty easy for me but other than that, everything is usually hard.”

Q: How much do you usually pay for your nails?

Q: What is your worst experience with your nails?

A: “[My worst experience was] when the fake nail took off my real nail. It was really painful.”

Q: Where is your favorite to get your nails done?

A: “I always go to TP Nails because they always do the nails the exact same way that I do. I highly recommend going there.”

Q: What’s your least favorite place to get your nails done?

A: “I’ll have to say Star Nails because they’ve hurt me and the nails didn’t really come the way I wanted them.”

Q: Do you remember the first time getting your nails done? What was the design?

A: “I was 12 years old and they were blue and black and kind of long.”

Ever since his curiosity at Camp Mardela in Maryland, McClay has found a new daily habit. At this camp, one of McClay’s friends lost a bet and had to paint his nails. McClay, intrigued, asked to have his painted as well. Ever since, he has always painted his nails. To McClay, throughout the years of doing it, he feels like it is not a big deal.

“Honestly, not at all. Like, I don’t think it’s a very big deal at all because it’s just the same thing as drawing on your skin. You’re just putting color there, which is why I do it because you’re just adding accent to something,” McClay said. “If anything, it’s fun because people notice it and if it’s something people notice, and yeah some people don’t like that, but I think it’s fine. The attention’s fun.”

In addition to painting his nails, McClay also gets manicures and pedicures. He does these rarely, but still loves doing them.

“When I get a mani pedi, it’s the best feeling. Like you just look at them and be like, ‘wow, they did a good job.’ They had a massage chair and everything. I almost fell asleep in their chair. The best part is when they scrape your dead skin off, it’s like peeling a carrot. I think it’s such a great experience. Pedicures are an amazing, amazing experience,” McClay said.

As a boy who paints his nails, McClay has been judged throughout the year with the common stigma that guys shouldn’t paint their nails.

Even though some people have adverse opinions about him painting his nails, McClay’s family is not one of them. They have never questioned it, even since the first time he did it at home. The only thing his family judged him for was making a bit of a mess.

“It was funny because the first time I did it, my whole mom wondered why the whole house smelled like acetone. When she found out, she just laughed because of how much of a mess I made,” McClay said. “[The first time I did it was] awful because I dripped sparkly nail polish on the bathroom carpet. It dripped like a big glob and I couldn’t get it out so I just smashed it in the best I could. It was actually really satisfying painting my nails. I just sat there and looked at my nails because I had no marks on my skin from my nail polish, which was really satisfying. I was so proud of myself because I got to the point where I could do it in a single stroke.”

While painting his nails for so long, McClay has been judged by it. Primarily, it has been by friends who find it strange. However, despite people’s criticisms, McClay just ignores it because, to him, it is no big deal.

“Of course people are gonna judge. I’m just like ‘okay.’ The only people who judge me are the people who knew me because whenever they’d see my nails, they would ask me about it and I just say ‘yeah,’ and they have no words after that, like thanks for letting me know,” McClay said.

For McClay, painting his nails serves as a way of adding accents to his outfits. His favorite colors to paint are purple, black and white, especially if they have sparkles. McClay thinks that anyone who wants to do it, including guys, should take that leap.

“I think if guys [want] to, they should. It’s a great way to add accents and a great way to draw attention, even if it’s clear nail polish, it’s the little things. If you added black nail polish, it’d make you a completely different look than no nails painted. I did it a lot because I like fashion and putting on clothes and looking at myself,” McClay said. I think that if you really want to paint your nails, you should, because there’s nothing wrong about it, unless you make a mess.”