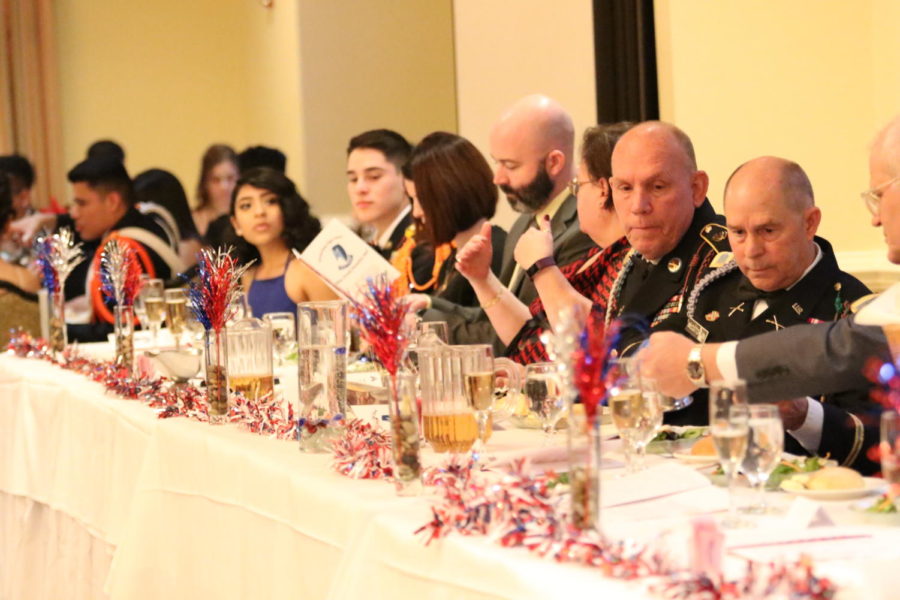 The current pandemic, known as the Coronavirus, has shut down major companies, cancelled annual tournaments and interrupted professional sports seasons. Not only has it affected our world globally, it has also altered many local and high school events that were planned. One of these events was the annual HHS JROTC ball. Due to the cancellation of the school, the annual ball has been cancelled as well. Sophomore Maribel Tirado is a member of JROTC and while Tirado was upset about the ball being cancelled, she was expecting it after seeing many other events get cancelled.

“People came to the conclusion to postpone it because the school cancelled, [every activity] and the government has cancelled [lots of things]. JMU itself was cancelled and so they had to shut it down because [the ball] was going to be held at JMU,” Tirado said.

While Tirado was more understanding of the change, others were more affected by the cancelling of the ball. Multiple students had made appointments in preparation for the ball and were disappointed with the inconvenient timing of the cancellation.

“Some people were upset because they had already paid to get their hair, nails or makeup done since it was the day right before the ball that everyone found out…,” Tirado said.

Junior Emily Serna, also a member of JROTC, was more upset about the cancelation. Serna looked forward to the event and was disappointed when it was cancelled.

“I feel really sad about it especially because I was so excited,” Serna said.

Throughout this time of the Coronavirus, many businesses and groups are using social media to their advantage to get information to the public about the status of their event or where their business is available. Both Tirado and Serna used social media to spread the information about the ball to other students and people who had planned to attend.

“I found out because a lot of people from JROTC were posting it on social media,” Tirado said.

While Tirado had received the news from her social media, Serna was helping to let other people know by posting it on Snapchat.

“We all posted it on our stories so everyone could be informed,” Serna said.

Tirado feels that the annual ball is important to the JROTC program and provides many benefits for the program.

“I think the ball is important to have because it shows a lot of etiquette and it shows our respect. We [also] invite lots of special guests and we get to show people what we do with our program so it recruits a lot of people,” Tirado said. “My favorite thing about the ball is just seeing everybody out of their school clothes and watching everyone dress up. It’s really fun and there’s a lot of music and dancing and you just get to hang out with your friends which is fun.”

Like Tirado, Serna believes that the ball is a good time for her to spend time with her friends and to recognize the effort that students have put in throughout the year.

“I think the ball is important because at the end of the year everyone can come to celebrate all the hard work they’ve done all year and we can have fun,” Serna said. “My favorite part is being able to see how much fun everyone is having, being able to see the dresses and definitely dancing.”

Underclassmen disappointed over the annual ball being cancelled

JROTC holds a Cadet Ball every year in March. However, this year because of the Coronavirus, it was cancelled. This decision was met with some relief, but more so devastation from students.

Not only do the members of JROTC put a lot of effort into planning for the ball, but they also did a lot to prepare, like working on their appearance. Sophomore Josh Denar is mostly upset about the amount of work he and others put into it.

“I am kind of disappointed because we put a lot of time and effort into the ball,” Denar said.

Freshman Sara Goitom also worked to put the ball together, but she is mostly upset about its cancellation because of the amount of time she spent preparing for the ball.

“I do feel a little disappointed because I had to go shopping for new makeup, get someone to straighten my hair [and] re-dye my roots and all for it to be canceled, but I did need more time to go find a dress so that was one of the upsides,” Goitom said.

In addition, the students in JROTC are taught proper etiquette for the ball.

“JROTC taught us how to dance, how to dress, how to eat at the ball [and] everything [else] there is to know,” Goitom said.

The JROTC Cadet Ball is not the only event that has been cancelled due to the Coronavirus. Schools and businesses are shutting down and concerts and other events are being rescheduled. Some, like Denar, believe that this is an overreaction. He believes all we need to remember is to keep up with basic sanitation practices.

“I think the precautions that were put in place are a slight overreaction because in reality, we are supposed to be doing the necessary sanitation things on a daily basis, [such as], sneezing and coughing into your elbow and washing your hands with soap and water,” Denar said.

In contrast, Goitom is thankful for the precautions put in place for everyone’s safety.

“I’m glad that they are taking the virus seriously. A lot of people are dying from it and the school being shut down is making sure any students don’t get infected,” Goitom said.

Denar is a sophomore so this would have been his second year attending the ball. Some of his disappointment comes from the fact that he had a lot of fun last year.

“I had a lot of fun last year. It’s a great experience to meet people you haven’t met already and just bond with others,” Denar said.

The Cadet Ball, a yearly dance held by the JROTC program was canceled this year due to Covid-19, several JROTC students were devastated by the news. One of those students was junior Jessica Martinez.

““I was extremely involved in planning the ball this year. It was stressful but I really enjoyed it,” Martinez said.

This year was going to be special for the JROTC program because they had planned on attending the Cadet Ball at Hotel Madison, a hotel which was made in early 2019.

“I was in the ball committee, which is a group of students that plan and prepare the ball,” Martinez said.

The ball committee helped with many things in the process of the planning of the ball. They helped with the food, the decorations and, for Martinez, the seating. She had to seat about 180 people who were coming to the ball. Martinez also helped Sergeant Major keep track of the people who were planning to come. In addition to maintaining the entire event guest list, Martinez had to keep track of her own. However, this once-in-a-lifetime opportunity led to disappointment for Martinez and her boyfriend.

“I [had] invited my boyfriend this year and he’s going off into active duty after he graduates this year, so he probably won’t make it to the ball next year and I’m so sad about it,” Martinez said.

This whole process took so much time out of the students and to have it all taken away from them was devastating.

“We’re not doing a ball this year nor any other JROTC events such as camps or award ceremonies. We have a summer camp every year but I don’t know if we’re even doing that, it wouldn’t make sense considering we can’t even have practice,” Martinez said.