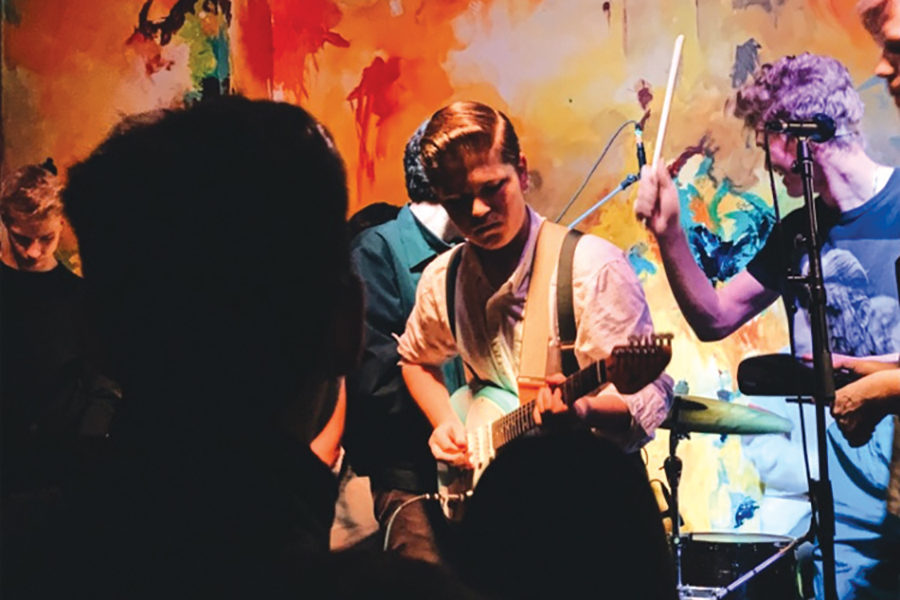 Shouts and hollers filled the air of Clementine Cafe as senior Weston Hatfield and junior Kate Cummings stripped the jackets of their 80s look and threw them to the floor. The crowd was loving the cover of Nelly’s “Hot in Herre” being performed by Low Volume, a student band. It was 9:30 on a Saturday night, Jan. 5, and the servers were struggling to make their ways through the crowd of HHS students swarming the stage in the back of the restaurant. For senior Sam Schaeffer, lead percussionist, this cover was a favorite of the night.

“The audience’s reaction was really great, and it’s just a really fun song to play. It features each member of the band well,” Schaeffer said.

Low Volume was formed about two years ago. Though the band currently has seven members, the Clementine’s performance included an eighth, Will Evans. After performing a gig with Schaeffer and meeting senior Jaden Graham at All-State jazz this year, Evans left a lasting impression on the members of the band.

“He’s absolutely incredible. He’s a way better musician than any of us. It was really sweet to get him [to perform with us],” Graham said.

Evans came down for only one rehearsal before the gig, but for the other members of Low Volume, the preparation took weeks.

“We practiced probably for an entire month beforehand, and we had people taking vacations for winter break, so it was just a huge logistical nightmare until the last week when we managed to finally get everything together,” Graham said.

In 2018, Low Volume performed at Clementine’s when they opened for Gryzzle, a band made up of JMU students. This time, Low Volume sold out their first headlined show with an opening act from a younger HHS band, The Governeers.

“It was a lot more stress and emphasis on us beforehand [than when we opened for Gryzzle]. We [had] a lot of time to cover, but the actual gig was much smoother than we thought it was going to be. We were actually cut off,” Schaeffer said.

As the night drew to an end just after 10:00, the crowd roared for another song. The band yielded to the audience and ended the night with a performance of Stevie Wonder’s “I wish.”

“The gigs are really great, and it’s cool to see a bunch of our friends and [the rest of] the community come out to watch us play,” Schaeffer said. “It gives them a chance to see us in a bit of a different light than they may during the usual school day.”

Low Volume is looking to perform again at Clementine’s, with the ultimate goal of moving on to even bigger venues and, consequently, bigger audiences.

“You definitely feel a lot more connected as a band in front of a live audience because you’ve got that adrenaline going through you. I definitely feel like I play a lot better in front of a live audience. I’m able to connect with every other band member,” Graham said. “[Our goal is] to get our name out there as much as possible before we graduate… and hopefully move to bigger venues outside of Harrisonburg.”