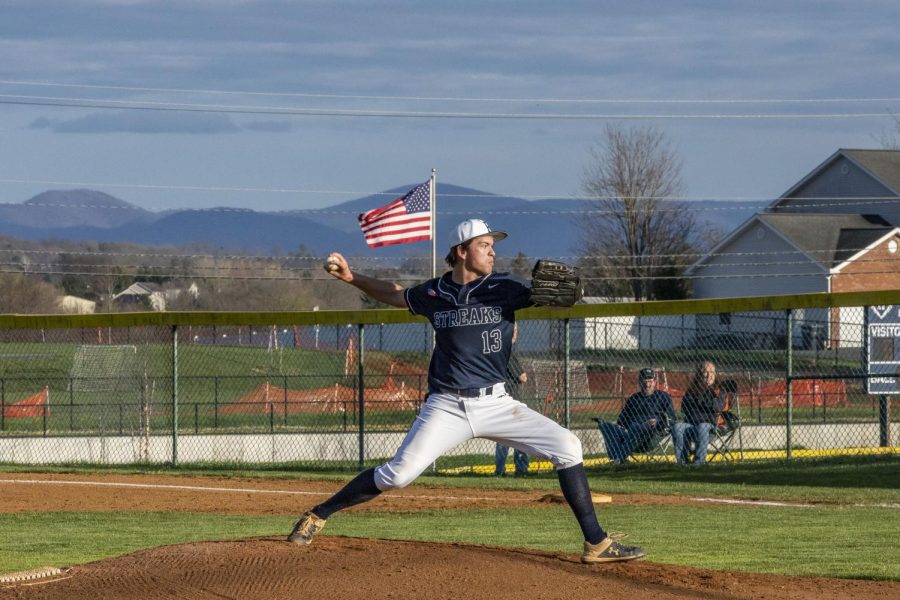 Senior Josh Engle throws a pitch at a game earlier this season.

Thursday, May 12 the varsity baseball team hosted the Millbrook Pioneers for a regular season regional matchup.

The game started off with Milbrook at the plate. On the first pitch of the game, Milbrook’s lead off batter hit a pop fly to junior left fielder Drew Bowman for the first out of the game. During the next at bat, Milbrook hit a single and then went on to steal second and third base. Following the single, senior pitcher Evan Bert went on to strike out two batters and ended the top of the first. Leading off for the Blue Streaks, in the bottom of the first inning was senior center fielder Dylan Burnette who grounded out. Bert was next up to bat and also grounded out, giving Milbrook the first two outs. Senior catcher Josh Engle hit an infield single for the first hit of the game for the Streaks. Following Engle’s hit, sophomore right fielder Miguel Fajardo struck out to end the inning tied 0-0.

The top of the second inning was much like the first with Bert quickly struck out the first three Millbrook batters. On the offensive side for the Streaks, junior third baseman Eddy Perez and sophomore shortstop Noel Cano-Rocha both grounded out. Then, Bowman was hit by a pitch for an easy walk to first. Next up to bat was senior first baseman James Vance, but he popped out to left field to end the second inning still tied 0-0.

To start the third inning, Millbrook bunted, however, it was fielded by Bert for an out at first. Following the bunt, Bert struck out another batter during the second out. The third batter for Millbrook hit a hard ground ball to third, but Perez made a sliding play for the third out. Sophomore second baseman Sawyer Hook was up to bat and hit a ground ball, but was called out at first. Following Hooks’ at-bat, both Engle and Bert popped out to the outfield to end the third inning.

Milbrook started out the inning with a single, but the runner was thrown out at third by Engle. Bert struck out the next batter for two early outs. The next batter for Milbrook popped out to second base for the last out. The bottom of the fourth started out slow with two early strikes that ended with a walk for Cano-Rocha. Bowman went on to ground out to end the fourth.

Three up and three down for the Streaks on defense. On the offensive side, Harrisonburg started things off with a single from Vance and a sacrifice bunt by Hook to advance the runner to second. Next up to bat in lead off hitter was Burnette who struck out. Bert hit a single followed by Engle striking out to end the inning.

With the help of Bowman, the Blue Streaks gained a better defense for the first out. Then, the first walk of the game was given up by Bert, but Perez made a double play to end the top of the sixth. Despite their efforts, Milbrook struck back with a three up three down for themselves with the strikeouts of Cano-Rocha and Fajardo as well as the pop out of Perez.

Bert continued to dominate on the mound with three more strikeouts. To start the inning at the plate for the Streaks, Bowman popped out and senior right fielder Glenn Vance grounded out. Then, Hook struck out to end the inning, leaving the score at 0-0.

Due to the fact that the game was scoreless after seven innings, the Streaks entered extra innings. This meant that the first score of the game would solidify the win for either team.

The Streaks had another three at bat inning and another strike out, followed by a ground out to Perez and pop fly to Burnette. At the plate for Harrisonburg, Burnette bunted down the line to third and was originally called safe, but after the umpire meeting, he was called out. Bert goes on to hit another single, but Engle pops out and Glenn Vance strikes out to end the eighth inning.

To start the inning, Harrisonburg made a change in pitchers and brought in Engle to throw and put Hook behind the plate. The inning started off with ground outs to Bert at second base and Cano-Rocha at shortstop. Then, Engle walked two batters and the runner at second stole third. On the next pitch, Hook failed to block up the ball and the runner stole home for the first run of the game. Bert ended  the top of the ninth with a ground out, Millbrook up 1-0. The Streaks offensive struggles continued with ground outs by Perez and Cano-Rocha. James Vance was up to bat, but he hit a line drive to third to end the game and the Streaks lost 1-0.

The Streaks will host Patrick Henry Friday, May 20 in their first playoff match of the year.