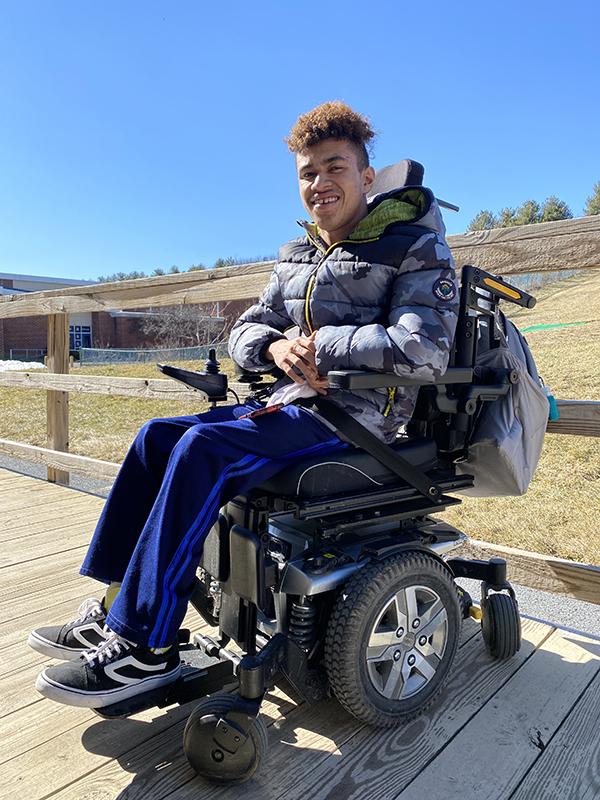 Sophomore Michael Bennett poses for a photo outside of his drivers education classroom.

From finding a new way to do an everyday task to dreaming about his acting career, sophomore Michael Bennett is constantly overcoming new obstacles. At a very young age, Bennett had a series of open heart surgeries that left him with multiple physical disabilities.

“My left hand doesn’t work as well as my right one. When I was pretty young, I had three open heart surgeries because one of the chambers in my heart closed up. That caused my left side to completely shut down. Eventually, they got it fixed to a certain extent,” Bennett said.

The technical name for Bennett’s disability is OHI, meaning “Other Health Impairment,” which can affect his educational performance. Due to Bennett having an OHI disability, he has problems with his vision.

“I have OHI, [which] used to be a problem with my heart, now it’s mainly vision problems where I can’t see small things,” Bennett said. “To help with that I usually read large print, but [a lot of core subjects like] math [can be] hard for me unless everything is in larger text.”

Even though Bennett has a hard time with reading smaller print, his vision doesn’t usually affect his walking at all.

“My left eye used to go off to the side, so I had to go to the doctors and get a surgery where they fixed the muscle. It doesn’t usually affect things like walking or anything, for small things it’s just harder,” Bennett said.

From Bennett’s open heart surgeries, his left side became almost unusable, however, he can walk as long as there aren’t many people around that he would have to get around.

“When I walk my right heel is fine, but my left heel stays up, because it is hard for me to push that heel down, which is the main thing that affects my walking. I can use my left side but it’s kind of difficult for me to use it, so I mainly use my right arm,” Bennett said. “I would rather walk most of the time, but it’s kind of difficult for me to walk in long spaces where there’s a lot of people because I have to situate around those people to get around, but mainly in short places where there aren’t many people it’s fine for me to walk.”

Due to the large crowds of people at the high school, it can be difficult for Bennett to use his walker, even though he leaves classes five minutes early.

“Being in a wheelchair is easier for me to get around, [especially at school]. The reason I switch to the walker sometimes is because I don’t want to get tired throughout the day of being in the wheelchair, so I kind of switch them out. When I use my walker, it can be harder depending on the crowd of students at school,” Bennett said. “It’s hard [to navigate the crowded school], but it’s easier for me because I get out five minutes early, so that kind of clears up the hallways, so I can get around and get to my next class [pretty easily].”

“The Overcoming Barriers [program] is a space for kids with disabilities so they can have the chance to be free in the real world. They do specific activities that help us to do things despite our disabilities. They’ve helped me figure out what it means to be in this world with a disability,” Bennett said. “The main person there was Dr. [Thomas] Moran, he told the students what to do, so we would always be on track with our disabilities [and] so we would always have something to do that relates to real life when you get older.”

Despite his disability, Bennett has figured out many ways to do things including video games, band and acting, by himself, using one hand.

“I mainly can do things by myself and I am pretty good at doing that,” Bennett said. “I’m pretty much one handed, so I’ve been playing one handed video games since I was seven. My first video game system was a [Nintendo] DS, [then] I moved up to a Xbox 360 and now to a Xbox 1. From seven years old to 15 years old, I learned how to do all of that one handed.”

Learning how to play one handed left Bennett with a slimmer selection of video games he could actually play.

“It’s different because I can’t play most games like other people do. I can’t play racing or shooting games, but I can mostly play fighting, wrestling, or boxing games which are easier for me to do,” Bennett said.

Even in gym class, Bennett has found a modification to do a lot of the workouts everybody else is doing.

“In school, I can mainly do the gym workouts we have with one hand. My teacher has made it so I don’t have to do a lot of workouts like everyone else, but I can do things such as a modified push ups [with one hand],” Bennett said.

Bennett’s passion for music also hasn’t been something he is unable to do due to his disability.

“For band, I mainly also have to perform with one hand. The teachers are fine with me doing this, so we try to figure out ways for me to do that,” Bennett said. “I play a lot of everything but mostly drums. It’s kind of difficult because it’s a very different way to do things.”

In school, yearbook and newspaper class has become one of Bennett’s favorites because of the freedom to write creatively and talk to a lot of different people.

“Yearbook class [is one of my favorites] because I feel like we can express ourselves more and find out a lot more about a lot of people [through interviews],” Bennett said.

Outside of school, Bennett has developed a large following of over 20.8K followers on TikTok by expressing his love for anime.

“[On my TikTok page which is @riasking23, I] mostly started out with stitching videos. The main thing I started in 2019 is anime. The first anime I did was WWE style anime and then I moved on to ‘My Hero Academia’,” Bennett said.

Due to Bennett’s love of video games he thought about pursuing a career in that industry when he gets older, but his love for acting and theater has drawn him away from video games.

“Firstly, I wanted to be a video game designer, but I changed that to acting because I feel like that would be more fun for me to do. I’ve switched multiple times between wanting to be a video game designer and an actor, but I’m just keeping an actor because I feel like that’s something that would be easier for me to do than actually sit at a computer for many, many hours trying to figure out a video game.”

Taking the theater class at the high school got him into thinking about doing it as a career.

“In Theater 1, we mostly do these little no word shows or skits. We don’t use words to show the emotion, [instead] we mostly show the emotion through the skits, but sometimes he lets us use words to explain. One time, Mr. Gibson let us use a song in the background to explain what was going on,” Bennet said. “Theater class is one of my favorites because I feel like I can express myself in it.”

Although Bennett has never taken his love for acting into a performance setting, he is hoping to get involved soon.

“I was thinking of doing the spring musical just to get a feel of it, and see what some sense of acting would be like [before I go into it for a career],” Bennett said. “After high school I probably want to go to JMU for theater and get into acting [even more].”