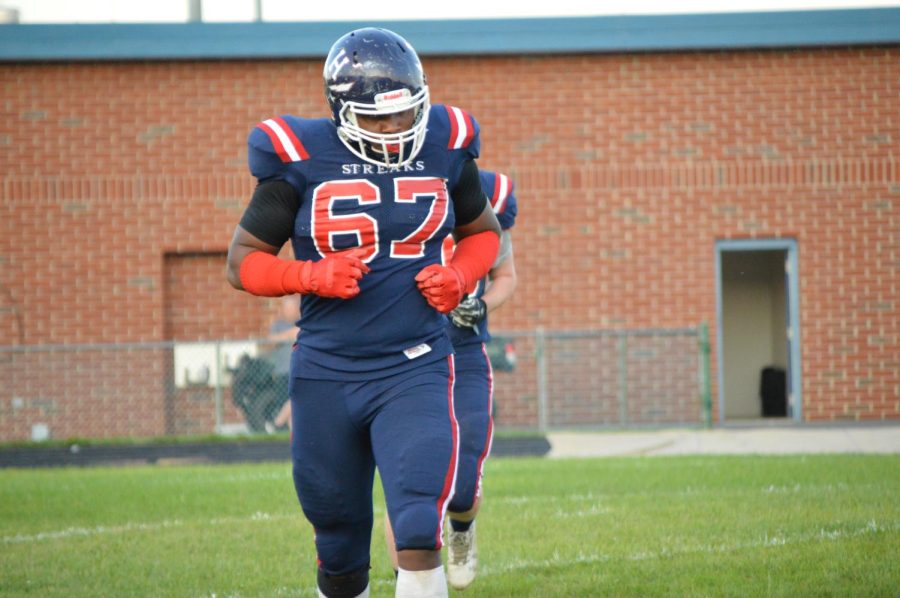 Junior Debo Harvey-Wright jogs off the field during a varsity football game Sept. 2021.

According to sportskeeda.com, a little over 6% of high school football players go on to play in college. Junior Donte (Debo) Harvey-Wright was recently offered a full ride scholarship to play football at Emory and Henry College, a division two program

“This has been overwhelming. Everybody’s been coming up to me, giving me handshakes, giving me hugs, congratulating me. It’s a good process,” Harvey-Wright said. “I’ve been playing since I was about six, seven years old. My dad got me into [football], and ever since, I just started having love for the sport.”

Over the past few years, Harvey-Wright has spent time improving his physical health to earn his offer.

“It all started when I was a freshman. We went to quarantine in the middle of the year, and my stepdad had 20 pound and 40 pound dumbbells. I would lift those every day, do push ups and squats, and I would do calf raises,” Harvey-Wright said. “I heard about workouts at school so I came and [started] working out to improve my game.”

Playing competitively has been a motivator for Harvey-Wright and proving to his family what he is capable of.

“Sophomore year I got serious about everything. The main thing that motivated me was the playoff game. We lost [to William] Fleming sophomore year, and we lost to them this year. We got to beat them next year [and that is what] motivates me. My uncle and my mom always [talk] about me making it for the family. That’s what [gets me] fired up. Of course, [I wouldn’t be here without] God,” Harvey-Wright said.

Once Harvey-Wright received the offer, he finds it a motivator to push himself harder..

“[The offer] adds pressure to you, of course. And next season, that’s going to be much more pressure because there’s going to be fans talking trash, even people that I know talking trash, but I’ll just use that as motivation. Just using the weight room, using the field, working my technique, [will help me improve],” Harvey-Wright said.

Outside of the football season, workouts are held to keep the players active and in shape.

“We have to work outside of school, two to four from Monday to Thursday. I’ve been working out there in the weight room with [Coach Kyle] Gillenwater. I go home to do calisthenics. Push ups, sit ups, body squats, just little things that help me improve every step of the way,” Harvey-Wright said.

Each player has their own special skill set, as for Harvey-Wright he strives to be an all around influential player.

“Best part of my game is definitely the bullrush. I go head on head and they just fall down. They fall down like pancakes. [Improvement wise I], most definitely [like] pass rushing. I need work on technique overall because I already have the strength. I have brutal strength just working on technique. I’ve been working with coach Brash all these past couple of days. He’s been getting me right with the technique. It should be fine by next year,” Harvey-Wright said.

“[I think we can go to] states next year. With the team we have, I think we can go very far. We have a pretty young team. They know what they’re doing. It should be a good ride,” Harvey-Wright said.

Making it to the National Football League (NFL) is the ultimate goal for Harvey-Wright.

“I like to stay humble, but everything is in God’s hands. With or without the NFL, I’m still going to be successful with that education I’m going to get. It’s just all in God’s hands, all of my coaches hands, [and] my future coaches. I [have] got to improve way more than I am right now,” Harvey- Wright said.

The recruitment process has already started for Harvey-Wright.

“[Schools] have been talking to me a lot. My coach has been talking to coaches here and there. It’s just been just workouts every day [and] eating right. [Still] everything is new to me because I’m just now getting recruited this year,” Harvey-Wright said. “I’m not making my decision until senior year. I’m sure there’s going to be much bigger offers coming in the future. [Emory Henry] is definitely up there because you can’t beat free education.”

Harvey-Wright would like to thank the ones that have pushed him to be where he is now.

“I’d like to thank Kyle Gillenwater for making this all possible. Mostly my teammates, they motivate me every day in the weight room. Without them, I don’t even know if [I would] be here right now. I just like to motivate the people around me and stay true to God, staying true to being a better person,” Harvey-Wright said. I got to get stronger, faster, maintain good grades, because without grades, you can’t really play football. I just [want] to stay a good person, because I’ve been a good person. I’m a stay a good person with or without the offer.”