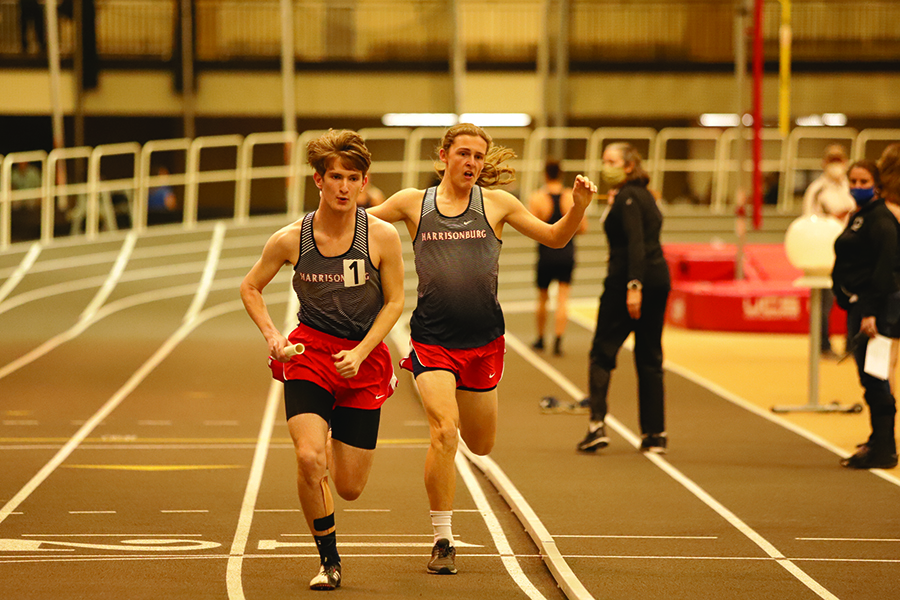 The girls and boys 4 x 800 relays led off the meet. Sophomores Annie Poirot, Lena Blagg, Clare Kirwan and senior Kate Kirwan, finished with a time of 10:22.60 and took third place for the girls. Juniors Liam Wightman and Braedon McGrath, and sophomores Nathaniel Bunn and CJ Hulleman also placed third with a time of 9:16.30.

The boys 4 x 200 meter relay composed of seniors Dylan Burnette, Javante Chacon, Shawn Auguste and sophomore Cadrian Rodgers-Davis put up an impressive time of 1:34.31 and qualified for the state meet. Both the boy’s and girl’s 4 x 400 meter relays advanced on to the region meet. Burnette, freshman Kaliab Gebrehaimanot, Auguste and senior Calvin Hulleman finished in a time of 3:39.63. Seniors Haylee Smith and Olivia King ran with Poirot, Clare Kirwan and finished with an equally impressive time of 4:27.53.

In individual events, junior Mia Beauzieux moved on to the region meet with a 7.86 and a fourth place finish in the 55 meter dash. Sophomores Addison Fornadel and Grace Bush placed seventh and eighth in the 55 meters with an 8.54 and 9.36.

In the boys individual events, Chacon qualified for regionals by finishing second place with a time of 6.76 in the 55 meter dash. Rodgers-Davis, Gebrehaimanot and senior Glenn Vance placed fifth, eleventh and fourteenth in the event as well. Auguste followed with a 38.48 and sixth place finish in the 300, accompanied by twelfth, thirteenth and fifthteenth place finishes from junior Evan Geisler, sophomore Eljeron Bonga and senior James Vance. In the 500, Tyler Miller took first place in a 1:10.87 progressing to regionals along with Burnette who placed second. Bunn placed sixth with a 1:19.30. The Hulleman brothers took first and second in the 1000 meter run and will advance to the region meet. Sophomore Matthew Rush followed them with a sixth place finish. Rush also ran the 1600 meter race and finished in a 5:08.10, moving on to the region meet. In the 3200 meter run, Wightman and freshman Kaedon Howley finished in 11:47.39 and 11:54.00.

In field events, junior Jolie Sallah advanced to regionals in the long and triple jump with a 14–07.25 and 30–04.00. Senior Marelyn Rivera-Rivas will also go to regionals in the shot put with a throw of 23–05.00. Junior Yar Al-Sindi followed her closely with a throw of 22–05.75. Auguste will advance in the long and triple jumps with a 20–03.00 and 42–02.25. In the long jump Chacon, Gebrehaimanot and Keenan Glago placed fifth, ninth and twelfth. Chacon will join Auguste at regionals in the triple jump with a third place finish. Glago and junior Silas Spears also placed sixth and seventh in the triple jump. In shot put, sophomore Gio Portillo will proceed to region after a throw of 35–08.25. Senior Arjun Kunver, junior Bryson Moats and sophomore Rawaz Askari placed seventh, eighth and ninth in the event.