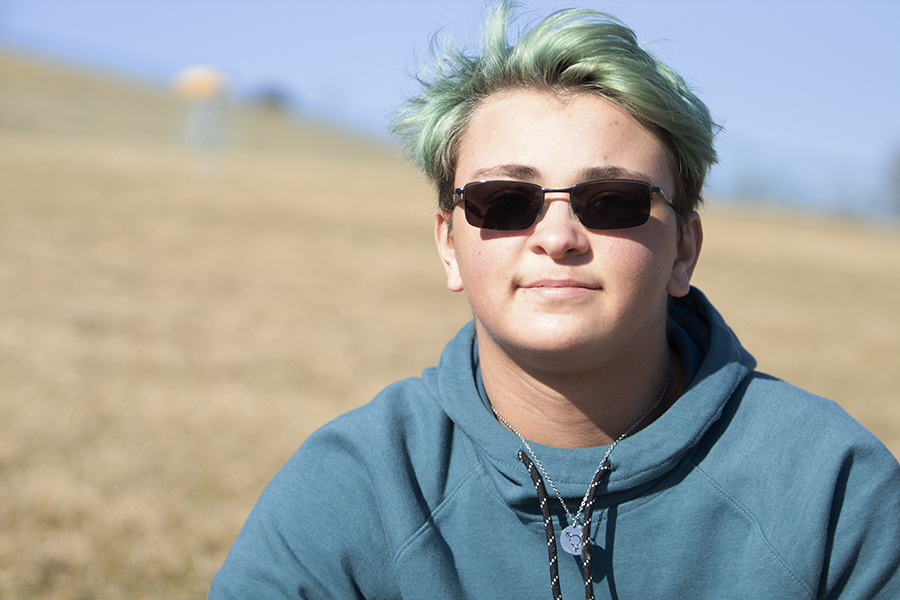 These words discouraged junior Kimber Lambert as he tackled the long road of his transition ahead of him, as well as working to grow into the person he is today.

“[Others thinking me being transgender was just a phase], made me struggle a little bit. [My mom thought] that it was going to be temporary, [and it] made me try to over-masculinize [myself]. I wouldn’t let myself do anything that I thought made me look feminine. It just made me decide that I had to show her that this was real, this was actually happening,” Lambert said.

Since around age eight, Lambert has experienced discomfort when it comes to his gender, despite his very feminine presenting childhood.

“The thing that surprised my mom the most was I was very feminine [when I was younger], I’d  over feminize to cover up my discomfort. I can remember trying to change my name and then I had a friend who cut her hair, and so I grabbed scissors and cut [mine] to a pixie cut because I was like, ‘I want short hair now,’” Lambert said.

A comment from Lambert’s grandmother repeated since his childhood was what made the idea of being transgender click. When he did come to this realization, acting on it felt urgent.

“My Oma, who is from Germany, would say, ‘Big boys get what they want, little girls do what they’re told.’ On a trip with her she said that and it made me explode. It made me realize that I’m not just a tomboy, it was something deeper. It [pushed me] to come to the conclusion that I am a boy,” Lambert said. “I came to my mom randomly one summer and I came out to her immediately. When you’re younger, it’s easier and now thinking about it, I’m like, I don’t know if I could have done it. [I wasn’t nervous at the time] because it felt so urgent.”

After this realization, Lambert has worked to find a name that fit how he was feeling. He didn’t simply just want a more masculine name, he wanted to choose something that held meaning to both him and his family. He has changed his name on school documents, but not yet legally due to the process being extensive.

“[When I first changed my name], I tried shortening it to just Mar instead of Mara. That was just me trying to find something different. I also [went by] Scott, which my mom hated and so did the rest of my family. It didn’t really have any meaning to me. It took me all the way up until this year to finally figure out a name that I like and a name that has meaning. That was the most rewarding part. Kimber is a more male version of Kimberly, which was my mom’s sister’s name, who died in a car accident when she was little,” Lambert said. “At school, you can get your name changed on basically every document they have, except your diploma. I was so happy that I didn’t keep having to have that reminder [of my old name],” Lambert said.

As far as support goes, Lambert’s mom has been his biggest supporter, despite his dad’s absence through the process.

ugh she might struggle to get along with it, she’s still going to support me,” Lambert said.

Even though Lambert’s mom has always been supportive of his decisions, the concept of him being transgender initially came as a shock.

“It was a little bit of a struggle for her because I was just so feminine, but she’s always decided to be there. I think she struggled in the beginning because she was trying to figure out [if] it [was] a phase or something that was real and needed to be dealt with. For the first year, she [let me] wear whatever [I] wanted, but she kept documentation of things that I was doing. She would keep drawings that I would make that said stuff like, ‘I’m a boy,’ and drawings of a sad girl and a happy boy. I think she felt the need to do that because I was in therapy and she wanted to make sure that I could get the help I need and that I wasn’t a danger to myself. [I think it helped her to] realize that it [was] real and not a phase,” Lambert said.

The medical side of Lambert’s journey began very recently. His mom has wanted to keep the process slow.

“I started [taking] testosterone just this summer because [my mom] wanted to make sure that she had time to process [and] I had time to realize if I wanted [that] or not,” Lambert said. “I’m planning, once I turn 18, to get top surgery. Bottom surgery is such a big deal that I’m not sure if I want it yet,” Lambert said.

There have been both challenges and rewarding parts of Lambert’s transition to become who he was meant to be. The long wait to start anything medical was the biggest challenge.

“[The] hardest part [of my transition] was the long years wait until I could finally [start the] medical [aspect]. I was in the worst headspace ever, I just wasn’t myself,” Lambert said.

Lambert has faced some discrimination through his sport on the concept of gender. However, conditions have improved in high school sports for transgender students over the past several years and he has grown closer with his team, as well as tried to use practice as a positive outlet.

“This is the first year that I’ve really built friends on the wrestling team. I’ve built a good friendship, not with all of them, but with a good bit of them. [However], it’s not always been so positive. They now have a

rule where girls and boys can weigh-in in the same room, but back in middle school and I think my freshman year, I had to wait to weigh-in in separate groups. I had to weigh-in with just girls. It was really weird and awkward, and I did not feel good about it,” Lambert said.

The pandemic being right in the middle of a crucial time for Lambert has made it hard to feel like he’s had time to grow as a person, however he has come far with acceptance for himself. He also now has a more clear view of his plans for the future.

“I’ve accepted myself more. Going into high school, you’re just this awkward middle schooler, trying to figure out what is going on [and] what you’re planning on doing in life. I’ve been able to figure out what I want and what I want for the future, which I did not have any idea of when I first went into [high school]. I want to go to college and become a geologist [in the future]. I want to help the Earth,” Lambert said.

Lambert’s advice for anyone going through this same process, no matter what stage they’re at in it, aligns with what his worries have been throughout the past several years.