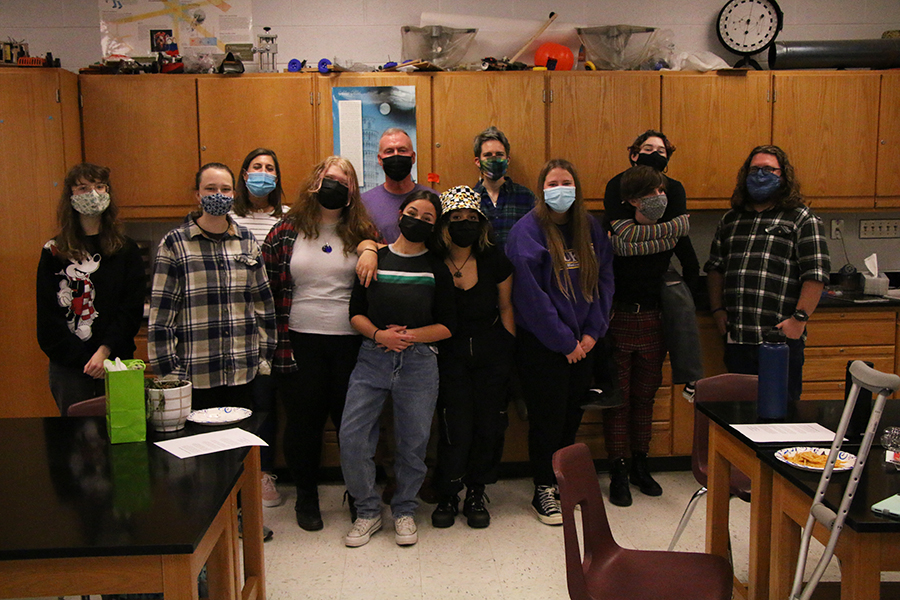 Members of the Gay-Straight Alliance (GSA) pose during one of their meetings. Faculty advisor of the group, Seth Berkeley, is to the far right.

Physics and Chemistry teacher Seth Berkeley has served as the faculty advisor for the Gay-Straight Alliance (GSA) for nine years. A student asked him to bring the club back in his second year of teaching.

“She said, ‘You seem like somebody who would be willing to do this,’ and I said, ‘Absolutely, I’d be willing to do it’. My role is mostly a facilitator. I’m trying to give people a space where they know that they can be themselves [and] that they’re safe,” Berkeley said.

Berkeley hopes for the club to feel like a community for students who may not experience that in other environments. He works to create spaces for students and teachers to connect and discuss these topics.

“I want [students in GSA] to feel a sense of community because that can be lacking in their lives. We [used to] have a panel where GSA students came and talked to teachers about what it was like to be a member of the community at Harrisonburg High School. Teachers were able to ask questions. I try to facilitate that sort of thing [and] bridge that gap so that teachers know what’s going on,” Berkeley said.

Building relationships with his students is Berkeley’s favorite part about being a teacher, as well as leading the club. Helping students grow into the person that they are meant to be is his goal.

“[My favorite part of being involved with these students is] getting to know them. A lot of times, [the] kids in [GSA], I see in the hallway, but don’t teach personally. Part of what I like about teaching is getting to know my students. [GSA] allows me to form relationships with more kids. I really enjoy seeing, especially my students in the GSA, blossom through the years. If I’ve seen them as freshmen versus their senior year, [I hope they] gain the confidence to be themselves in all the ways that they can be themselves,” Berkeley said.

Running the club and keeping the GSA alive is important to Berkeley due to not having an opportunity to be in a club such as the Gay-Straight Alliance when he was in high school. He hopes to be a support system for these students, alongside the school.

“[The GSA is important] because we still live in a world where it’s not as accepted as I want it to be. The world has made tremendous strides. When my father was in high school, the idea of a GSA would have been a big mess. When I was in high school, it still probably would have been a big issue. People have come to grips with sexual attraction, but the ideas of gender, gender fluidity and not being the gender that you were assigned at birth, are still areas where we have a lot of issues. There’s a lot of confusion and concern out in the world, some of it warranted, some of it not. It’s really important for these students to have a place where they can come and talk to each other, be themselves and know that there are others that are supporting them. There is an unfortunate correlation between being part of the community and being depressed, [having] anxiety and attemping suicide. Anything the school [or I] can do to help reduce that is a good thing,” Berkeley said.

The Gay-Straight Alliance members form unique bonds over the topic of conversation and vulnerability required. Berkeley feels lucky to be able to guide students through those topics, as well as learn from them himself.

“The conversations we have can be very personal [and] deep about what’s going on in kids’ lives. I’m sure other teachers have those conversations, but I feel like I probably have a higher concentration,” Berkeley said. “Whenever you’ve got a club that is based on any sort of interests or identity, you’re [going to] form deep connections. I have seen, through the years, really strong friendships develop between club members. I don’t know [if] that [is] unique to the GSA, but I do think because we are often talking about things that are going on in people’s lives, that requires a level of vulnerability and being okay talking about that in front of a group of people.”

Berkeley feels that the students in GSA have helped him learn just as much as he has helped them grow as individuals.

“[These students have] absolutely [helped me]. I’m always gaining new perspectives. I think I’ve got something figured out and then no, I didn’t have that figured out at all and I ask them as many questions as they ask me. I want to know, that’s one of those things about me. I enjoy learning all sorts of topics. I certainly have been affected by the students and I still keep in contact with some who have graduated,” Berkeley said.

Berkeley lets the students guide how meetings run, whether that be focusing on projects and community service, or more of the social aspect. Discussions are usually centered around topics relevant in school or the community.

“[What we do at meetings] really depends from year to year. In some years, people want to be really organized and want to do things out in the community. In other years, it’s more of a social thing. This year so far, [at] meetings we have been more focused on the social aspect. Getting to know each other more [is important] because it’s been so long since we were doing things as actively, but also we talk about issues in people’s lives. We talk about if there are issues in the school that they might want to address or want some feedback on,” Berkeley said. “For example, there was a book that was pulled from the library recently and a couple of students are upset about it. The reason [behind it being pulled] seems to be because of content about the LGBTQ+ community. There is a process for that to happen and that process wasn’t gone through. That felt upsetting to some, so we talked about that in our last meeting. Then we played board games. I believe in getting to know people through doing things together and games help with that,” Berkeley said.

Even though the group hasn’t begun projects together, Berkeley hopes to reach out to the elementary and middle schools individually.

“I am trying to have more connections with the middle and elementary schools. We want students who are transitioning to a new school to know there’s this resource. One of the things that I want to make happen this year is going to middle schools and saying, ‘Hey, I’m the leader of the GSA at the high school when you get here.’ [I want them to know they] have a contact point [and] a face [they’ve] seen at least once before,” Berkeley said.

Berkeley is involved in the concept of “Safe Zones” in schools as well. The goal of Safe Zones is to educate teachers about issues and concepts in the LGBTQ+ community.

“[We teach] terminology and the issues that might come up. There are stickers [on] the teacher’s [classrooms] that have gone through training. The idea of the sticker is that if you belong to the community or have questions about the community, these are people that at least might have some idea what they’re talking about and may be able to help you,” Berkeley said.

Teacher’s response to Safe Zones has been positive overall. At the last professional development day, 30 new teachers were trained.

“Not everybody that comes walks away [agreeing], but the majority do. I’ve been super impressed with our faculty, their willingness to learn and to help support our students [makes me hopeful],” Berkeley said.