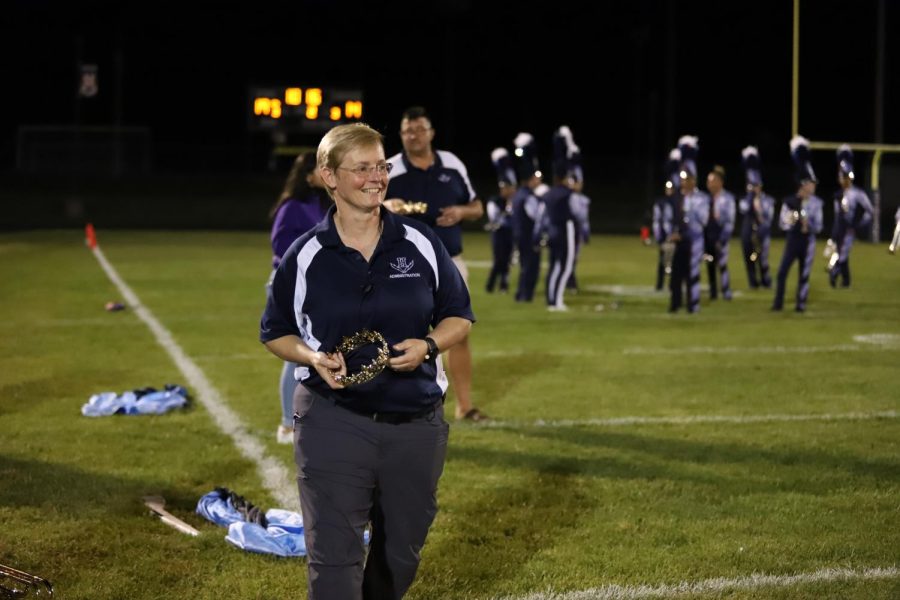 Two months into the 2021-22 in-person school year, shortages within the school have created an angst for staff and students. It has become increasingly tougher to find credentialed teachers and substitutes. The shortage is not only occurring in the high school, but it’s becoming a national situation. Principal Dr. Melissa Hensley oversees this shortage and is helping to solve the problem.

“We have multiple vacancies still, that we’ve been unable to fill, that there are a lack of candidates for. Currently there are no applicants for many of the vacancies that we have,” Hensley said.

The shortage is affecting the way classes would normally operate. In order to work with the staff currently on hand, changes have been made to run classes smoothly.

“We’ve either had to cut classes and not offer them [or] take out sections and increase numbers in classes, so you’re seeing higher numbers of [students] now, than what we would like to have. We like to keep [class numbers] down around 24 for everybody, but [now] you’re seeing much higher numbers like 28 in a lot of classes, as a result of us not being able to hire people,” Hensley said.

All departments are in need of more help, especially English, Math, and Career and Technical Education (CTE). Due to the number of vacancies, it’s been a challenge finding candidates for these positions.

“We have two teachers who will be going out [for] maternity leave soon, that we don’t have a back fill for them. We’re going to end up short in [the English] department. We’ve also got a ROTC opening that we have not been able to fill. There’s four or five in the building of those [open] positions,” Hensley said. “We’re always hiring math. CTE can be really hard. We’ve got a family consumer science position in that department that hasn’t been filled since I’ve been here. That’s two years out now in that position, and starting year three that position has not been filled. We actually have two family consumer science teachers at this high school, [but] we’ve been operating with one. We’ve got a social studies opening right now, as well.”

With the lack of finding candidates, employees from HCPS are stepping in to fill these roles when needed.

“As of this week, school district personnel are actually coming in to help sub for classes. We’re seeing some of the coordinators and some people from central office coming in now and helping to fill the voids of where we don’t have people in classrooms. I’d say we have no more than three to five [substitute teachers] total, at a max. As a result of our shortage and the pressure that’s put on our staff of losing their planning block in order to cover classes, we pay them for that, but still they’re not getting their time to plan and do things they need to do,” Hensley said.

Not only is there a shortage in teachers and substitutes, but there is a lack of bus drivers to transport athletes to events.

“Extracurricular activities are really hard right now to get drivers for. One, they have to be willing to make those trips. Both the transportation supervisors are currently now driving a bus to get us down to where we have less vacancies there. With the extracurricular stuff, we’re [particularly] finding some of the longer trips that people don’t seem to want to drive. I’m confident we’ll make it through fall and through the winter sports. Spring will bring a bigger challenge because there’s more sports. I wasn’t anticipating us not getting drivers at this point, because it started out pretty strong. I thought we’d be able to continue to find the drivers,” Hensley said. “We also don’t know [what] the impacting factor is, either that it’s folks that are unwilling to drive the longer trips or is it [because] they’re out. I know one of the drivers is out on personal leave, so that’s impacting us because that driver typically drives for us. I think that’s about a month out until that driver returns.”

The HCPS central office and the school are working closely to find the right candidates for these positions.

“It’s a joint effort [to bring in new substitute teachers]. Central office does a lot of the public relations (PR) piece of it. Our coordinators for each one of the subject areas are helping to sift through applications. The responsibility largely falls onto the school to do the interviews and recommendations for the hires. There’s just few and far between to find right now. PR and getting the word out through Indeed and other social media platforms [has] been helping,” Hensley said.