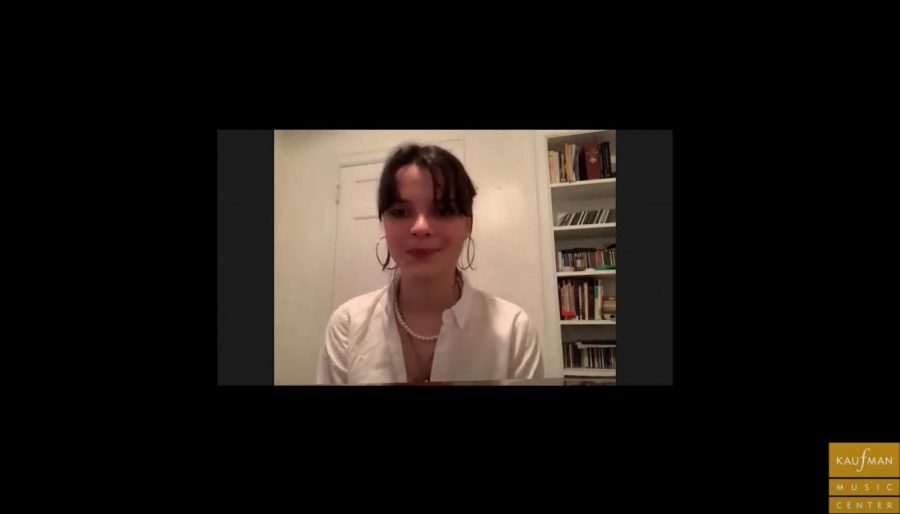 Sophomore Azalea Twining was recently accepted into the Kauffman Center for the Performing Arts Luna Composition Lab. She was selected as a nationwide fellow in music composition and is currently working with composers Missy Mazzoli and Ellen Reid to create her own pieces.

The goal of Luna Composition Lab is to mentor minority groups in the composition world.

“It’s a program created by Missy Mazzoli and Ellen Reid. It’s meant to address the gender imbalance in the composition world, which is predominantly male. It provides mentorships, master classes and other amazing opportunities to young female, non-binary and gender non-conforming composers,” Twining said.

For Twining’s entire life, she has always been involved in music in some way.

“I’m just [involved with music] all the time. Outside of school, [I spend] most of my days composing [or] practicing. I’ve [also] taken voice lessons for a very long time at this point,” Twining said.

Twining has always had a love for music and creating music. Her composing process starts with whatever pops into her head at any given moment. She then decides what she can make out of that melody or lyric.

“I love singing all kinds of music, and I love writing all kinds of music. I think [what I compose] really depends on what organically pops up for me in the moment. Sometimes you just get little bits of inspiration or a melody [or lyrics] goes through your head. I just think, ‘What is that [thing] that I just [had]?’ Then, I [figure out] what medium can best translate that. Sometimes I [hear] me and my guitar playing the song, or sometimes it’s a string quartet. Whatever works,” Twining said.

When she heard about Luna Lab, Twining jumped at the chance to apply, but she had low expectations of getting in due to how large the program is and how little experience she felt she had in composing music not in her comfort zone.

“I [had] to apply [to get in]. I submitted one composition, one original composition, a recording or electronically produced recording of that, and I had to do some writing. [I didn’t] really [expect to get in] because it’s such a big program. I’ve never really composed for instruments that I can’t play myself. Before this, I hadn’t done anything that I didn’t think I could perform and render with the resources I had. I was very new to it. I didn’t really think I was going to get in, but I just went full out with it and decided to go a little crazy on my application piece,” Twining said.

Being selected as one of the six fellows in the program nationwide, means a lot to Twining. She is excited to have access to resources she didn’t have previously.

“[Being selected to be a part of this program means] so much. It’s kind of crazy to think about. Music really is my passion and there’s never been a question in my mind about that. This is really a great program that gives me the resources to be able to create what I want and authentically use my different facets as a composer and a singer to really create the work that I’ve wanted to for a long time, but did not feel like I had the knowledge or resources [to do previously],” Twining said.

Through Luna Lab, Twining has also been mentored by a founder of the program and others in the field.

“I have been mentored by Ellen Reid, who is one of the founders [of the program] over this past year. She’s really amazing and I’ve learned so much from her, so I have those lessons and then we’ve had loads of master classes with composers and performers in the field, which have been really amazing. Being a part of Luna Lab is meant to be a lifelong thing. They really want you to keep participating in it, so I’ll still be participating in certain parts of it throughout the rest of high school and hopefully beyond,” Twining said.

In the program so far, Twining has composed several pieces and is excited to get a professional recording of one done soon.

“So far I composed a piece for piano trio, which is piano, violin and cello, with the help of my mentor who gave me tips here and there. That’s been performed at Kauffman Music Center by kids who go to a special music school in New York. I got to work with the musicians to rehearse and perform that piece. Then, I think in the next couple of months I’m going to be working with some professional musicians at the International Contemporary Ensemble. We’re going to re-record the piece [where] I [will] get a professionally done recording of it,” Twining said.

In the future, Twining is planning on staying involved with the program. She will get to go to New York with next year’s fellows as well due to not having that opportunity this year with the pandemic.

“In the future, when there isn’t the pandemic [to worry about], you go up to New York for a week [and] you get to go to Lincoln Center and Juilliard and then the music high school. [They] are all in the same block. You just hang around that area and you get to go and do master classes and networking events. They’re going to try to bring the fellows from this year to New York next year so that we can do that too, but I also get to continue attending the master classes, and working with my mentor when I can. There’s just endless opportunities with it,” Twining said.

Twining’s biggest takeaway from this program is how thankful she is to have been accepted into a community with others who share the same interests.

“[Being a part of this program will] definitely [have a] positive impact [on my music career]. I’ve made so many connections with incredible composers in the field, like my mentor Ellen [Reid], and Missy Mizzoli are just incredible people and incredible composers. I admire them and their music so much. I just know that I have this community of really cool, strong people who are passionate similarly as I am towards music and are there to support me. That’s just pretty irreplaceable,” Twining said.