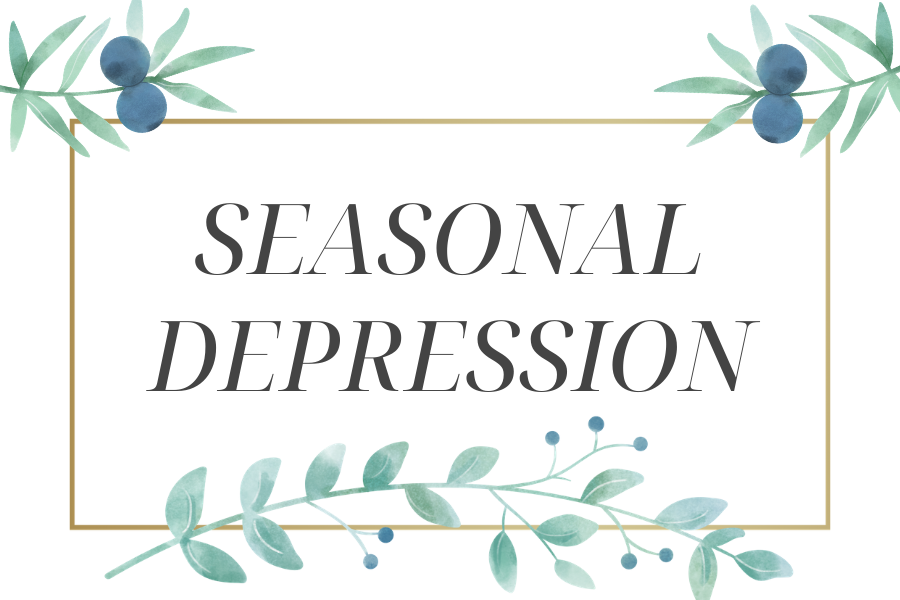 When the season changes, certain people’s mindsets and motivations change as well. Seasonal depression, or seasonal affective disorder (SAD), is a less commonly talked about form of depression. It is based on the light that one is or isn’t getting due to the season. Counselor Christina Norment has never worked with a student who experienced it, but she has some knowledge on the subject.

“Seasonal depression is a diagnosable form of depression that happens based on the seasons. When there is less light, and some researchers think less vitamin D, going into your system through your skin, you’re more likely to have trouble with Serotonin in your brain. When you have less vitamin D, it can affect how you feel. Serotonin is the chemical in your brain that affects how you feel. In the case of actually diagnosable seasonal affective disorder, you feel significantly lower than you would in the summer,” Norment said.

The hormone Melatonin also plays a part in the disorder. Melatonin affects sleep and mood.

“Melatonin in the brain affects part of SAD. Melatonin is a hormone in your brain that is associated with the onset of sleep and also plays a part in mood. Changes in season change your level of melatonin,” Norment said.

Norment hasn’t counseled a student with seasonal depression, mostly in her opinion because it’s lesser known.

“I actually haven’t had a student come to me and say, ‘I think I have seasonal depression’ or ‘I’ve been diagnosed with seasonal depression’. Maybe that’s because it’s the lesser known form of depression, but people just don’t know or haven’t identified that winters are really hard [for them]. [Sometimes the winter is] so hard that [they] experience clinical depression in the winter,” Norment said.

“I think winter, I’ve noticed anecdotally, can be hard for my students on a greater level, partly because of those very real, biological things that are happening to them because of lack of light. Also, you’re in the middle of the school year. [It’s like you’re] in the middle of a tunnel of the school year. You can’t really see the light at the beginning, and it’s not that exciting new part of the school year. It’s harder to see the light at the end of the tunnel too because you’re not quite close to that yet and feeling the excitement of summer coming or finishing up another year or graduation. You have that with some of the physical things we’re experiencing…and you can have some at least lower feelings if not, sometimes, depression,” Norment said.

Seasonal depression not only affects mood, but it also greatly affects motivation. Not having the motivation or energy like one used to can affect school work and a person’s ability to perform everyday tasks.

“One of the biggest things that we talk about in identifying depression is lack of motivation. Another way to describe that is if you used to be really interested in something, let’s say volleyball. Every time I would wake up in the morning, I’d be looking forward to the next game, or practice. Suddenly I’ve been feeling low, so low that I no longer even care about playing that sport. I just am not interested in [it, and] I don’t have the energy. That’s just one example of how somebody might notice a lack of motivation that they used to have. A lot of times when a person is experiencing depression, it wouldn’t be just one thing like a sport. It would be multiple things in their life that they’re just not feeling anymore. That’s a big red flag to explore that further, maybe with a mental health professional or you could start with your school counselor. That’s true for seasonal depression and for your typical, all year long depression,” Norment said.

For the most part, SAD and depression have the same symptoms. However, because SAD stems from the lack of light, serotonin, and vitamin D, there are treatments available to be able to get that light that you’re missing.

“Whatever is true for seasonal depression, pretty much is true for all depression symptoms. [However,] some people use therapies that involve UV rays and light. Actually sitting under a kind of light that helps lift the depression a little bit because it gives some of the vitamin D. You can also take that as a vitamin supplement. Make sure you connect with your doctor and ask them [first]. It’s worth asking a doctor about if you think you have seasonal depression. Light therapy [or] vitamin D therapy could help with seasonal depression, where with more generalized depression that’s throughout the year, that might not have as much of an effect. If we’re talking about a mental health disorder that’s diagnosable, or thinking you might have that level of distress where it’s getting in the way of your day to day activities and reaching your goals, that’s a trigger that you should probably talk to an adult about it. A school counselor is a great person to talk to first. If you think you have depression, don’t try to manage it on your own; reach out for help. Depression can get dangerous. It has some dangerous side effects, including thoughts of suicide or attempted suicide. You don’t want to mess with that,” Norment said.

There are also plenty of coping methods that you can do on your own to feel a little bit better than normal. These include getting outside, physical activity and being around other people when possible.

“[I want to] make [the] difference that we all have depression-like feelings in a normal realm of emotions. [One thing you can do to help relieve or lessen the symptoms is] get on a good sleep schedule. [If you have] feelings of depression or just feeling low or irritable in a normal day to day lifestyle, getting your sleep under control can really help with that. That means having a predictable bedtime and a predictable time that you wake up, even on the weekends. Teenagers need eight or nine hours of sleep [because your brains are growing], but they rarely get that much,” Norment said. “Exercise is a wonderful thing, and exercise doesn’t have to be a hard workout at the gym, it can just be getting outside and walking around your neighborhood or park. Being in nature actually helps even more than exercise indoors with helping you feel good. Also, just knowing yourself. Some of my students are really excited about music and that really helps them feel good, or being with their pets. Another pretty universal [coping method] though is other people. We are a social species. We thrive on connections with other humans, so don’t minimize how much that helps in helping you feel good [and] having a sense of well being; [find] somebody who can really listen and understand.”

Sophomores Viv Hammond and Lizzie Gotay have both experienced a form of seasonal depression. Both experience year round symptoms, but they notice it getting much worse in the colder months. Hammond notices that school plays a big part in why her depression gets worse.

“I have year round depression. I was diagnosed with major depressive disorder last year. Seasonal depression fluctuates. In the summer, I’ll be fine because I’m out of school, and it’s a lot less stressful. [Also,] the sun gives you serotonin; [it] makes you happy. In the winter, you’re around family and school, and [there’s] the cold. School is one of the reasons for my depression because it’s stress and it’s pressure. Usually when fall and winter come around is when I get really stressed out because [that’s] when the semester ends,” Hammond said.

Gotay’s depression also gets worse with the seasons, and she notices that she doesn’t enjoy things like she usually does when she experiences depression.

“Usually in October, November, it starts getting really bad. I’m not having fun while doing anything and I’m just doing it to do it, not actually enjoying things,” Gotay said.

Hammond has noticed these symptoms since the beginning of middle school.

“[I’ve noticed this happening] since I was 11 or 12. That’s when middle school started, [and] I started getting stressed out with schoolwork,” Hammond said.

Gotay has also dealt with SAD since middle school. However, she did not recognize what she was experiencing until someone explained the disorder to her.

“This has happened for about three years. I didn’t know what seasonal depression was, but then I talked to someone and they explained it to me. I started noticing the pattern that it would get worse with the months,” Gotay said.

“Seasonal depression affects my schoolwork and basically anything I have to do. My priorities aren’t straight at all. I will just sit in bed all day [and am] not motivated to do anything. The only thing I’ll do is get up to get food or go to the bathroom, especially in the winter time because there’s not really much to do anyways. It’s just a whole motivation thing for me, I don’t really have any. My schoolwork usually is worse for the first semester and the fall and winter,” Hammond said.

Gotay also experiences this lack of motivation. When she’s not in the cheer season, she doesn’t find a reason to keep working hard in school.

“Whenever I get down or have seasonal depression, I feel like I’m not motivated to do my homework. Usually my favorite sport is during the fall, so I don’t have any motivation to push me to have good grades. I don’t really care if [my grades are] good or not,” Gotay said.

Hammond has found some coping mechanisms to feel better during the colder months. She has found that going to therapy, hanging out with friends and setting priorities have helped her tremendously.

“The way that I found [that] helps [my depression] is therapy. I’m working on coping skills. I feel like that’s really really important for depression. A lot of my coping skills are hanging out with friends. That helps me a lot. [Also,] taking deep breaths and prioritizing stuff that’s happening on that day and not about my future. It’s thinking about things one step at a time and not worrying about the future. [Also,] not overthinking things as much and medication helps,” Hammond said.

Gotay also uses socializing as a coping mechanism. She tries to break from her every day routine and try something new as well.

“I found that hanging out with my friends, and trying out new things every day or at least every weekend [helps]. I try to do something new [often] because I feel like part of depression [is] like you’re bored of everything. You feel like it’s the same day over and over and over again. Finding something new to do every day helps me cope with school and regular life,” Gotay said.

If you or someone you know experiences depression-like symptoms or what you now recognize to be seasonal depression, reaching out to a school counselor is a great place to start. Make sure to reach out for help if you think you need it.