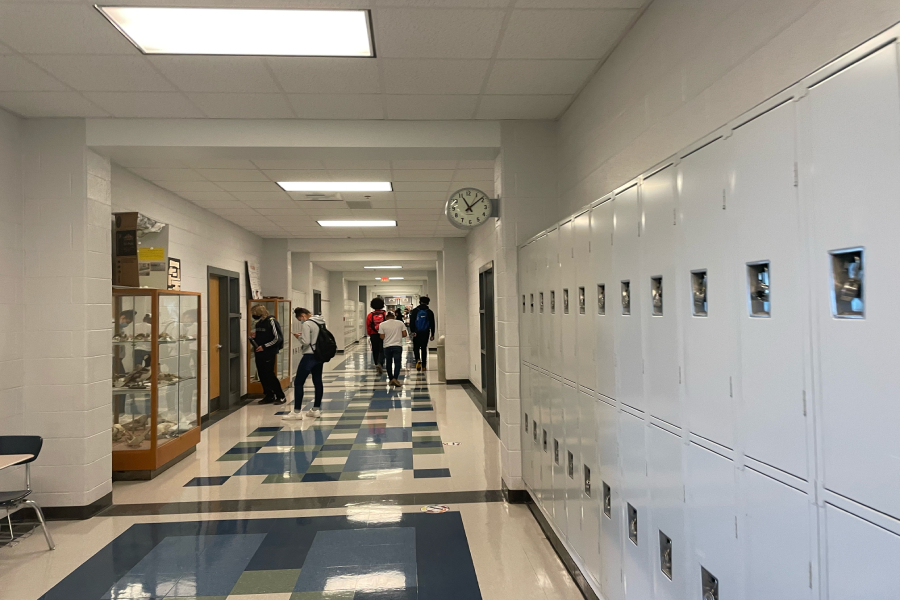 Students who have gone back to an in-person schedule find their classes.

Most freshmen and some sophomores are going into their next year of high school with little time in the building to experience its activities. This may have a large effect on the school environment next year.

Freshman Annie Poirot is mostly worried about not knowing how to get to classes due to not getting that experience her freshman year. Additionally, she is worried about the adjustment from all virtual classes to completely in-person instruction.

“I’m definitely nervous [about going back to school]. It’s such a big adjustment, and I’ve gotten so used to virtual school this whole school year. The thing I’m most nervous about is finding my way around and meeting the teachers in person, [also] the amount of work. [I’m] going to be adjusting to a whole new setting, but then also have a lot of work since it’s sophomore year,” Poirot said.

Freshman Anna Campillo is nervous about finding her way around as well, but she’s also concerned about integrating with the other students that she has not met yet.

“I’m a bit nervous because I don’t know my way around at all, and I haven’t been able to meet many people from Thomas Harrison [Middle School], so I’m a little nervous about that, [but] it’s been pretty easy so far [getting adjusted to the high school online]. When I had to go in for SOLs, it was pretty easy to adjust to [as well],” Campillo said.

In contrast, sophomore Noah Gabriele is not nervous about returning to school. He is glad to have experience from last year.

“I’m not really nervous [about going back to school]. I’m kind of over online school. [Having experience from last year] means a lot, at least for me. When I was a freshman, for the first couple months, I didn’t know where I was. At least [sophomores] know [their] way around the school. Obviously, we don’t know as much as we would know, but more than not having any experience,” Gabriele said.

Poirot is hoping that teachers will help new students out with getting to classes for the beginning of the year.

“I think the first week [back to school] will probably be hard, but I really hope that the teachers will be understanding about it. I’ve grown up going there because all three of my older siblings went [to HHS], so I’m pretty used to where it is and most of the fields. I’ll probably find people that will help me [too] and I’m not super worried about the full year, but I think the first couple of days will be hard finding my way around. I’m thinking I might be confused about the inside of it [and] getting the hang of the layout and where all the classes are,” Poirot said.

Gabriele thinks that it won’t take long to fall back into familiar school routines. However, some things will be different, like possibly having to wear a mask.

“I haven’t been in school [in person] yet [this year]. I think it’ll take a week to a month to get back into routine. It was really difficult to get into the online routine, so it’ll be easy to get back into the regular schedule. We’ll probably have to wear a mask [though, which is] obviously different,” Gabriele said.

The freshman class’ first year being online may ultimately have a large impact on their next couple years of high school. Poirot is worried about how virtual school has affected things, such as her social skills and attention span.

“I don’t really know how big of an effect [freshman year being online] will have in the long run, but I think it definitely has had a pretty big effect [because] this is what I’m used to now. I almost kind of forget how in person school was. Also, I think my attention span is so much shorter than it used to be. I think it’ll take some time to get used to [being back]. The first couple months might be hard, but then I think hopefully I’ll get back into a groove after that,” Poirot said.

For Campillo, she’s mostly concerned about not having a normal freshman year affecting her ability to get around the school and to know how extracurriculars work.

“I think it’ll affect me [by] not knowing as much [about the high school experience], but I think I’ll be able to overcome that through the next year or so, and [as] I get to join more clubs, [I’ll]  meet new people and participate in more activities at school,” Campillo said.

Gabriele is excited to go back as an upperclassman and have more opportunities that he didn’t have as a freshman.

“As freshmen, we didn’t really go out into the courtyard during lunch, so we’ll be able to do that. Also there’s been like no social interaction with people, so that could be weird [going back],” Gabriele said.

Both Poirot and Campillo ran on the cross country team this year. That experience has helped them both get more acclimated to the high school environment, as well as meet new people.

“I’m excited about more in person activities. I’ve done cross country in person this year, but it hasn’t been completely normal. I’m excited to see what a normal cross country season will look like, and things like watching sporting events too. I think it’ll be a change, but I’m more excited than I am nervous for that. [Running cross country has] definitely helped a lot. It’s probably been the highlight of my school year because I get to actually be in person with people from the high school. [I also got to experience more of] the vibe of high school sports teams, instead of just middle school sports teams. I kind of know my way around the track [now], not necessarily inside the building, but around it,” Poirot said.

Campillo was also grateful for cross country helping her find her way around the building.

“I was able to do a few activities, like sports [this year]. It’s been great because I’ve been able to meet new people and just being able to run around the school and find my way around and see kind of what we’re going to do at cross country and practices [which is cool],” Campillo said.

Poirot is excited to go back to school in person at some point, however, she will also miss certain aspects of virtual school.

“I think I am [excited to go back to school in person]. I’ve just adjusted so much to virtual school, and I feel like I’m excited for some parts, but I’m also gonna miss some parts [from online]. I’m going to miss having kind of like my own schedule and the short hours, definitely. I think I’m excited though to see people and I think it [will] also help me learn better to have teachers in person teaching me,” Poirot said.

Campillo is also excited. She is looking forward to meeting new people from the other middle school.

“I am excited because meeting people from Thomas Harrison will be fun because I pretty much only know Skyline [Middle School] people right now. I’m excited to see teachers in person and just see the feel of the high school,” Campillo said.

Going back in person may definitely have its advantages for Poirot. Primarily, she thinks she will do better academically.

“I think there will be advantages, I think we’ll all do a lot better academically. [Also], hopefully our social skills will increase. I think there [are] advantages of just learning better and meeting new people,” Poirot said.

Campillo also thinks there will be advantages; she hopes to have a better relationship with her peers and teachers.

“I think there will be advantages [to going back in person] because I think you have more of a relationship with your teachers and classmates, and you’re able to do more classroom activities [in person],” Campillo said.

Gabriele is excited for the same things, as well as feeling more comfortable being in person rather than online.

“It’ll be a lot easier for people to ask questions. I think a lot of people are kind of afraid of asking questions online. [Also, I’m looking forward to] more social interactions and making new friends,” Gabriele said.

Poirot would like to start fresh in person back to school next year instead of doing half and half online and in person right now.

“I think personally, I would rather go back starting fresh sophomore year because I honestly don’t really want to go back this year because I’m so used to all virtual. I don’t want to have to change everything for just one month of school. I think it’ll also be better when we’re all starting fresh in the fall since we’re not going to be used to going back in person. I think I just want to start fresh in the fall,” Poirot said.

Campillo thinks it would be cool to go back to school for a little bit this year to be able to get a feel of what high school is like for next year.

“It’d be cool to go back for the last part of the year just to see teachers, see new people and just get a gist of the building,” Campillo said.

For Gabriele, he is excited to just start fresh in the fall as well, due to the last couple months of school being really busy for him.

“I would rather just start fresh junior year. That’d be kind of chaotic at the end of the year especially with AP testing and SOLs,” Gabriele said.