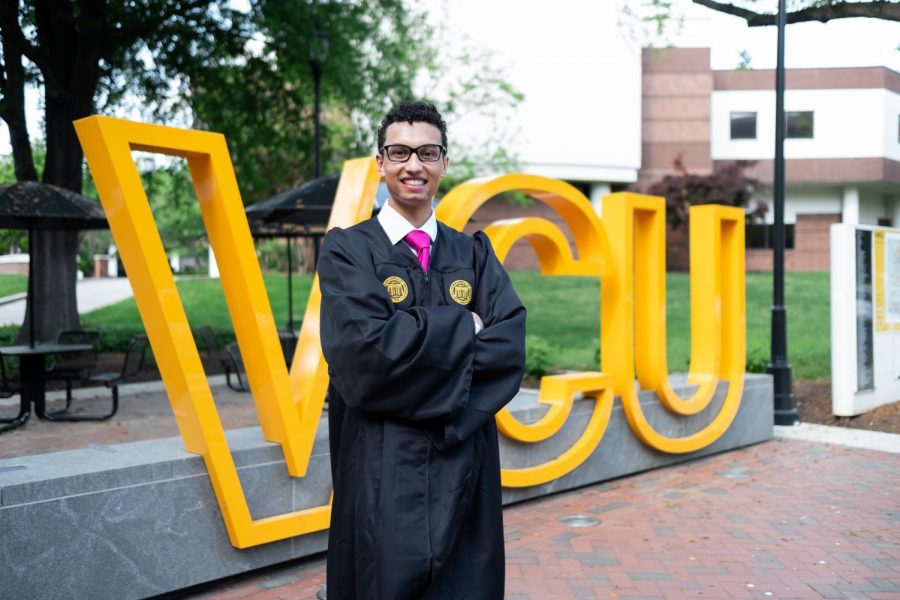 Used with permission by Isaiah King

After graduating from HHS in 2018, King has now also graduated from Virginia Commonwealth University (VCU) after three years of college.

After graduating from Harrisonburg High School in 2018, alum Isaiah King is now closing yet another chapter of his life following his graduation from Virginia Commonwealth University (VCU) in Richmond, Virginia.

“Thanks to HHS and the wonderful educators [at HHS] I had a lot of [Advanced Placement] and Dual Enrollment credits so I entered college as a sophomore. I didn’t really consider graduating early until my junior year, but I did end up graduating college in three years,” King said.

As a senior in high school, King attended a preview day on the campus of VCU that solidified his decision to attend the university.

“My senior year of high school I did a preview day of VCU. I went down to Richmond and got to meet people and tour campus to get some exposure to the biology department. While sitting in lecture, I got to listen to the President of Black Men in Medicine which is a program that I was formerly the president of. Hearing them speak really just made the decision that I was going to be a Ram of VCU,” King said.

When King attended Skyline Middle School, he was presented with the opportunity to attend a medical camp at Sentara RMH. This camp has fueled King’s love for medicine throughout his highschool and college careers. Now, King plans to continue to pursue a career in the medical field after accepting a fellowship position at the National Institute of Health.

“I didn’t really want to leave the science field. I wanted to find something to do during my year prior to, hopefully, starting medical school. I came across this fellowship training program at the National Institute of Health [NIH] up in Bethesda, Maryland, so I applied to that and now here I am [as] a cancer researcher,” King said.

Since he had his hopes set on becoming a doctor, King continued to pursue the medical field through a mentorship class at Harrisonburg High School. With the help of Susie Smith, Gehrie Bair, Tracey Barr and Bethany Everidge, King utilized his time in high school to cater to his interests.

“[I did the] mentorship class [with] Ms. Bethany Everidge which allowed me to actually be mentored by physicians, but more importantly I got to shadow and see what their career is and step into their shoes,” King said. “I was able to do some work in an orthopedic surgery office as well as in the emergency room at RMH.”

Although he has had the opportunity to shadow medical professionals in various fields, King has narrowed his career paths down to two options.

“Finally getting to college meant that I was able to shadow whomever, because Richmond is such a great city. You could easily be swayed to so many different options, but right now I am a little bit on the fence,” King said. “I am considering continuing in this path of research and continuing cancer research as a surgical oncologist. I have also considered doing military medicine and being a field surgeon for the army.”

Through his time at VCU, King became heavily invested in the Black Men in Medicine organization. This is the same organization that swayed King to attend VCU on his first day visiting campus just three years ago.

“The Black Men in Medicine organization and all that it encompassed [was the best part of VCU]. This organization connected me to my physician mentors and got me involved in research. It was a tight-knit group of brothers that would meet in the library or even just to catch up on weekends. Being able to find that tight-knit community of like-minded individuals [was the main highlight of my time at VCU],” King said.

After three weeks of the post-baccalaureate program at the NIH, King has had the opportunity to research prostate cancer development in clinical trial patients while working in Dr. Adam Sowalsky’s lab.

“[When applying for this fellowship] you have to reach out and claim your spot to find a lab that will be equally as invested in you. I am [working in] Dr. Adam Sowalsky’s lab in the laboratory of genitourinary cancer pathogenesis. Overall, we are looking at prostate cancer using samples from clinical trial patients to examine the genomic and genetic changes associated with prostate cancer development, progression and drug-resistance,” King said. “At the moment, we are still deciding on a project that we will look at. My overall project’s interest [is] identifying mechanisms that contribute to their development of castration resistant prostate cancer. Pretty much this means cancer that has the ability to survive surgery and chemotherapy treatments.”

Between both his new fellowship position and his career thus far, King has encountered many challenges, such as knowing how to balance his rigorous work and social life.

“[The biggest challenge is] finding work-life integration. Knowing when to stop working but also knowing how to efficiently do your work so that you can maximize the time to take a break,” King said.

In the coming months, King plans on finalizing and submitting his applications to medical school with the hopes of enrolling in the fall of 2022 after his fellowship program comes to an end.

“Next will definitely have to be medical school, I am going to preach it into truth. I apply to medical school next month so the hope would be that once this fellowship is over I would start medical school in the fall of 2022,” King said.

King’s motivation stems from his drive to leave a position of impact on others. In both his career and personal life, King has lived by the same mantra that inspires him to push through adversity.

“Science in general is such a constantly evolving and ever forward pushing career. I always attribute it to running, the mantra that I have always recited is that I don’t stop when I’m tired, I stop when I’m done. My motivation is keeping up with the current science,” King said. “Science is a lot of time getting answers from things that don’t talk so that motivates us to find answers but also to be able to see the great outcomes that it provides to people.”

Although King knows that a career in the medical field is challenging in many aspects, he feels that the rewards outweigh the hardships that come with it.

“A career in medicine and the success that will come with it is following the discipline that you set for yourself. You are going into this career with a lot of time where you will need to be your own self advocate, but also be smart to surround yourself with like minded people that will support you and keep you going,” King said. “[Also] don’t forget to have fun, if you’re going into medicine the quote that my doctors always gave me was that they’ve never worked a day in their life because their job is fun. Make sure that the career choice you chose is one that you’re going to wake up and smile about.”