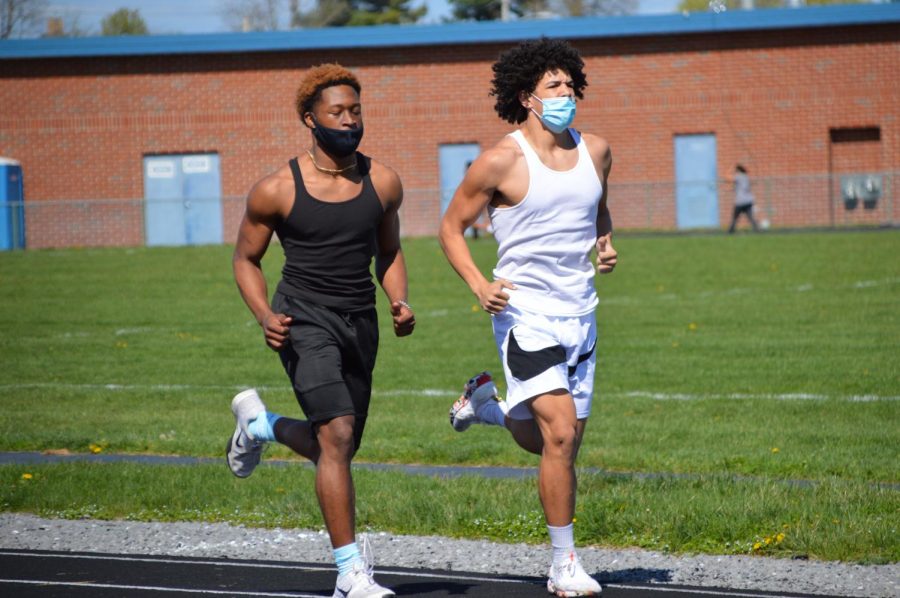 Two students run next to each other on the track.

Monday, April 12 through Friday, April 16, varsity track tryouts were held at Harrisonburg High School. CTE teacher Matthew Denlinger is one of the coaches involved in track this year. Denlinger was very impressed with the students who participated in tryouts this year considering the circumstances being faced.

“I was really impressed after our tryout week. We have an awesome group of student-athletes that are highly motivated and want to be successful this season,” Denlinger said.

Freshman Caleb Bergey, sophomore Abby Kauffman and junior Brigid Banks were a few of the many students who tried out for track this year. Banks and Kauffman are part of the distance team. While, according to Kauffman, the distance team doesn’t typically make cuts during tryouts, they do hold time trials. Kauffman felt that the unofficial time trials went well for her and the team.

“I think they went pretty well. For distance, it wasn’t really a tryout because I don’t think anyone will be cut from the team, but on Friday, what we did was an unofficial time trial so [the coach] can know where we’re at right now,” Kauffman said.

“I would say tryouts went pretty good. This year we have kind of a smaller long-distance team, so I can obviously speak for long-distance which is what I’m running. [But] it went pretty well, I feel like my time trial was pretty successful for the beginning of the year as well as all the other girls and guys running long-distance,” Banks said.

Similar to Banks, Kauffman also thinks that the time trials went well for her, but due to an injury she faced at the beginning of this year, it caused her time to not be as good as she would have hoped.

“[For my unofficial time trial], I did an 800, and my time was 3:17, which is alright [but] I could’ve done a lot better. I was recovering from an injury that I got in January so I haven’t done a lot of running, so I knew [my time] wasn’t going to be a super amazing time so now I know where my starting point is. It was kind of helpful to see where I’m at as well,” Kauffman said.

Unlike Banks and Kauffman, Bergey is part of the sprints team, but he still thinks that tryouts went well for himself and everyone else running.

“I think [that tryouts] went pretty well for everyone,” Bergey said. “I [think I] did pretty good. I exceeded my expectations,” Bergey said.

Considering the COVID-19 pandemic, Denlinger thinks that in this track season, the runners should just enjoy it since there was no outdoor track last year or indoor track this year.

“This season is all about just enjoying the fact that we can have a season.  We lost outdoor track last year and didn’t have indoor track this year.  It has been tough on everyone on the team, from coaches to athletes.  We have a really close-knit group of kids on the team, so not being able to compete or practice was tough.  It really makes everyone appreciate how lucky we are to have a season,” Denlinger said.

Because of this, Denlinger thinks that this year’s track season will look much different than in years past.

“Everyone has to wear masks, only one person to a seat on the bus, no sharing of water bottles, etc.  We have strict COVID protocols that we are following to keep everyone safe.  I’m just so thankful that we will be able to have a season,” Denlinger said,

Besides having a different track season due to COVID, Banks still does not enjoy the beginning and end of any race because in the beginning, she gets nervous, and towards the end, she tends to find it hard to breathe.

“I feel like the beginning and right at the end of the race are my two least favorite parts… Pretty much all of it kind of hurts because in the beginning, you’re nervous, then in the middle it obviously is kind of painful since you’re pushing yourself to go faster, and then at the end, your throat kind of hurts and you’re kind of struggling to breathe, so all of it [is my least favorite]. It’s great once it’s really over,” Banks said.

Kauffman also faced a struggle while running. Since she hasn’t been able to run a lot due to her injury, she found it hard to push herself while running.

“The challenging part is that I haven’t run fast in a really long time. I haven’t run a race or run fast around the track for a while [which made it hard to] push myself, especially around the second lap, to go fast when it was hard,” Kauffman said.

Banks’ favorite part of tryouts was being able to experience her outdoor track season since she missed out on it last year due to COVID, and she also enjoyed seeing her other teammates and coach.

“[My favorite part was] probably just being able to see everyone again [and] getting back into the swing of things because I missed outdoor track [since most people] didn’t get to have it last year because of COVID. I really missed having Hertzler as my coach as well as getting to see all of the other teammates,” Banks said.