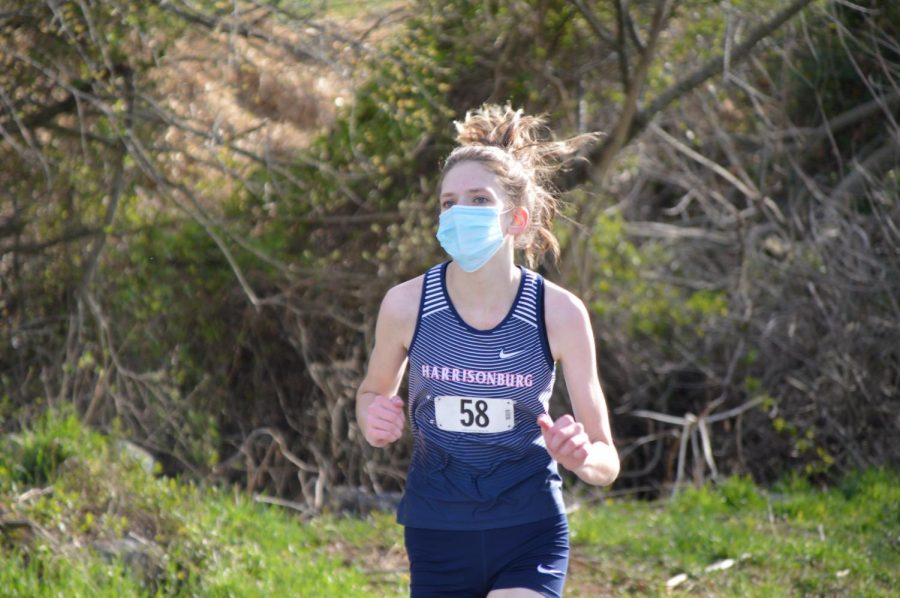 Freshman Abby Vance runs towards the finish line. She finished in 16th place and took 34:59:94 to run the girls varsity race.

Camillo thought that the meet went well and that her team did a great job out on the course. However, she was not very fond of the large number of hills on the course.

“The meet overall for our team [was] pretty good. It [was] definitely one of the harder courses with the most hills. I think one of our teammates got her personal best. Most of our top runners didn’t run during that race, but [the race] still went well,” Campillo said.

Similar to Campillo, Vance also did not enjoy the number of hills that were on the course. She thinks that the hills made the course more challenging and one of her least favorites of the season.

“[Something that was significantly more challenging than usual was] the constant hills. There was no flat [part] anywhere on the course. Basically, we were just running hills the whole time which kind of sucks,” Vance said.

Something Campillo enjoyed about the meet was cheering on the other teams running, along with spending time with her team to celebrate the end of the race.

“One of my favorite parts is actually just cheering on the boys [team] and spending time with the team after the race,” Campillo said.

Vance did not finish in the time she was hoping for. She was aiming to finish the race in under 30 minutes, but she did not. She typically likes to sprint towards the end of the race, but since the constant hills drained her out, she was not able to.

“No, [I did not finish in the time I expected to]. I wanted to [finish] in 30 minutes or under, and I got 35 minutes which is not what I wanted,” Vance said. “I wish I could have ran better at the end [of the race] because I was really tired and usually I sprint it out really hard [at the end of races], but I just couldn’t do it this time,” Vance said.