Coping with art turned to a passion for White 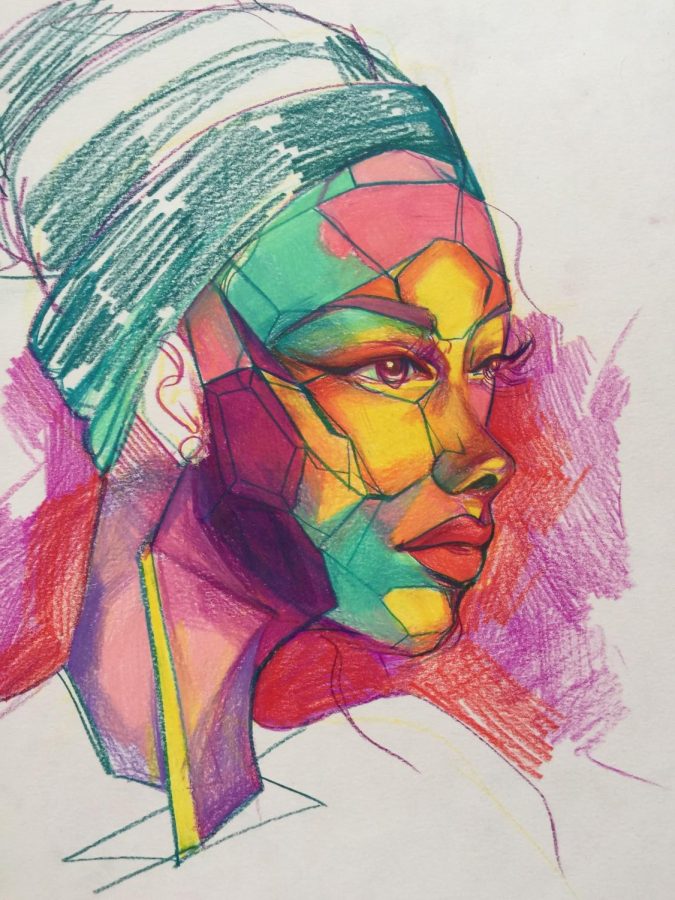 White likes to show different culture through her art. She researches different countries and the standards they uphold.

What started as a coping mechanism to grab a sense of reality and control has now turned itself into a passion. Senior Julia White’s been doing different arts since around the age of six, when her mother was diagnosed with breast cancer. White has since then been using art as a form of creativity and management.

“Art came from reverting back to being like a little kid sometimes. What I mean in that sense is that art really allows you to have control over what you’re doing, just kind of [experimenting], like when you’re having something going on in your life where you feel like there’s no control. I think that doing art and just being able to create a world of your own feels really nice because it feels like you actually have control over something. For me, I feel like the lack of control I felt in my life for a really long time was a large part of the reason I started doing art because it’s like I can actually decide how something goes in life. So that’s also part of the reason I started doing art,” White said.

While moving to the United States aligns with White starting to grasp the concept of art, her passion grew in eighth grade when her mom was diagnosed with breast cancer.

“I started doing art ever since I moved to the States, I was six years old. But I really got into art in eighth grade after my mom was diagnosed with breast cancer. The reason I started doing it is because it was a coping mechanism, and it really helps me just kind of not think about what else is going on in my life,” White said.

White enjoys art for what it is and the creativity that goes with it. She also uses painting and drawing as a way to find peace and calm. When things get hard or aren’t on track, White likes to paint to relieve herself of all the stress build up.

“The reason I do [art] a lot of times is because I look at the world around me, and I think differently than people do. I think everyone views the world differently. But for me, I’ve always been a very detail-oriented person. Even when I look outside, I’m paying attention to everything around me. I think art is a way of translating the way I see the world around me,” White said. “Also with my mom, I think that’s a motivating factor behind me doing art. It just kind of started out as a coping mechanism, although, it’s not so much anymore, I think it’s still a place of peace for me. So if there’s something going on in my life and I’m doing a lot of art, that’s probably the reason why. Recently it has been kind of hard, so I’ve been doing a lot of art the last couple of weeks, which just really helps me,” White said.

White has been diagnosed with clinical depression and anxiety and finds that art is very helpful to her.

“Art has also helped me with my mental illnesses, like major depressive disorder and anxiety. It’s helped ground me in some ways that other things haven’t. Art is also a friend in some ways too. It’s something that has been a big part of my life for about four years now. It’s helped me and people may find that weird but I don’t care what others think,” White said.

White has found art to be a way to get out of her head when she feels like she needs to.

“I think the biggest problem that depression causes is that your world perspective exists only within yourself. What I mean by that is that you may think that everyone hates you but that may not be true, but your brain is telling you that so you believe it. With art, it’s almost kind of takes you out of your own head for a little bit and it helps to ground you in some ways. Art doesn’t completely cure [depression and anxiety], but it definitely helps to just kind of just think outside of myself sometimes and think about other things around me instead of what I feel people think about me, which causes me to go into depressive states at times. With my anxiety, the whole process of seeing something unfold in front of my own eyes and being part of that process of creation really helps with anxiety and being stressed. It’s been a large part in a small way to help myself,” White said.

White used to be rather insecure in herself but art has helped her deal with that and many other things such as being less perfectionate and less afraid of failure.

“I used to be very insecure in myself quite a bit, and so I would always show people my art all the time, which must have been annoying. I think the reason I did that is because l was made fun of by people for doing art, especially in STEM, [but] not STEM as an academy. It’s more individual people who’d do that. I think it was just weird for people and they didn’t understand it. When someone doesn’t understand something they usually will make fun of it. But I think growing as an artist over the last three years and being in fine arts has been really helpful to me. Art has helped me in every aspect of my life in a lot of ways. I’m not scared of failing so much as I used to be and I am also now way less of a perfectionist. I’ve also realized that like a lot of things are a lot more about the process than the product. So if I’m focusing on, if something will turn out well or not, it usually turns out worse, ironically. But when I just go with whatever is happening in the painting, or whatever I’m working on, it turns out a lot better. And that’s because I’m actually like, in the moment and doing what I want to do,” White said.
White’s process

When setting up to paint White, usually listens to music and paints at her desk. She has many supplies that she uses and even gets some from the school. White prefers to work at night as well.

“When my mom wasn’t doing well, I listened to a lot of Stevie Wonder because she listened to a bunch of him when I was little and that reminds me of her quite a bit. I also like the 70s and 80s, and 60s, just like all sorts of artists. I really enjoy Amy Winehouse. She’s one of my favorites. R&B is probably my favorite genre. It depends on the mood I’m in. If I need to get something done fast, then I play quick music. If I want to just relax, I’ll play relaxing music,” White said.

To get ideas and inspiration, White likes looking at other cultures’ art, Pinterest collections and other artists.

“I have a massive collection of stuff on Pinterest. I’m really interested right now in figures. But it’s also been really cool to learn how to draw like the human body and just like learning anatomy. I look a lot at people, emotions and faces. I’m really interested in nature. [I also look at] different places all over the world. I also definitely draw inspiration from the places my parents are from, because my moms from Bulgaria, and so I have a lot of pieces of Bulgarian landscape and culture. My dad’s from Portland, Oregon, so I have stuff from there as well. For example, mountain ranges have come up a lot in my work. I think it’s because both of those places [Bulgaria and Portland] are located near a mountain range. Also Virginia too [and the] Shenandoah Valley. So just places that I’m connected to,” White said.

When going to paint White starts basic and slowly builds up and adds volume and detail.

“I have to start from doing stuff very abstract, and then kind of refine from there. I start with blocking in different shapes. And then after that, I refine the process from there. And I always start very simply, so like, with the human figure, I start with rectangles and circles and whatnot. It looks really amateur at first, but like, once you know what you’re doing, you refine it. That’s so much easier to do. It’s basically going detail by detail,” White said.
White’s steps when drawing/painting