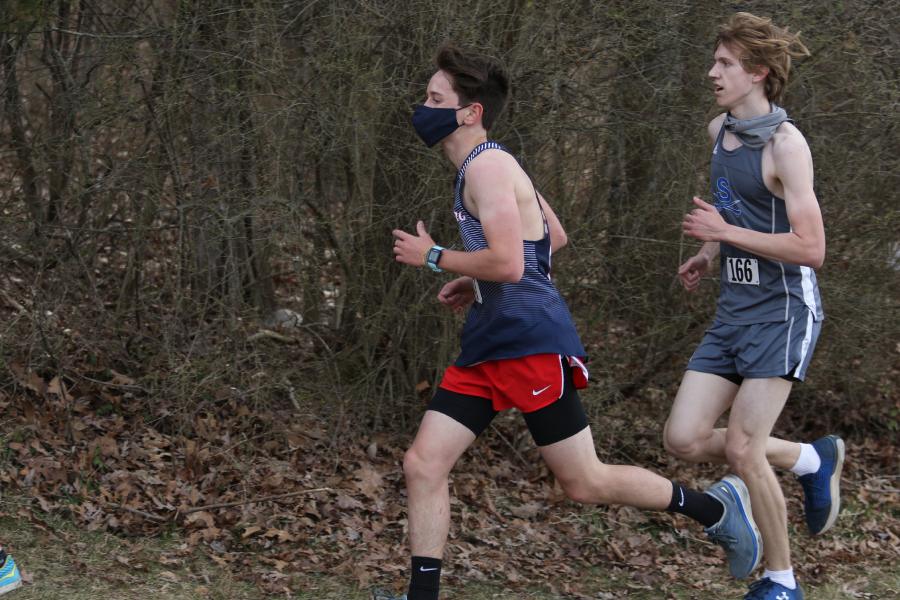 Sophomore Liam Wightman ran cross country and track in middle school and joined the high school team this year due to having free time due to the COVID-19 pandemic.

“I joined the team because I had free time and decided to put all the training I had done over the summer to good use. I had goals to run half marathons over the summer. When I was training for those, [they were] really long distance and [I got to get] the feel for running under about seven minute miles [which] was kind of challenging. It builds up a lot of running endurance,” Wightman said.

Wightman ran in middle school; however, he did not run his freshman year so he was unsure of what the high school team would be like.

“[High school cross country has] definitely been different because the distance is farther and the competition is harder. [However,] I ran a lot during the summer so I kind of got used to longer distances,” Wightman said.

The season so far has gone well for Wightman. One adjustment for Wightman, however, has been getting used to wearing a mask and adjusting to COVID safety precautions while running.

“So far it’s been pretty fun; running in meets is fun, but it’s been a lot of work [because] you have to always wear a mask. It was also kind of weird running at the beginning of the season with cold weather. That was pretty hard,” Wightman said.

It took a while for Wightman to adjust to running in a mask.

“I think in the beginning of the season, [running wearing a mask] was really hard because you aren’t used to running in them, but by now it’s gotten pretty easy. When it rains, it’s really hard [though] because all the water builds up,” Wightman said.

Even though he has encountered some challenges, becoming closer with his teammates has been the best part of the season for Wightman.

“[My favorite part of the season so far has been] just meeting everyone on the team and having a fun time while I’m running,” Wightman said.

Although he knew the majority of the team from other activities, the cross country season has allowed him to strengthen those friendships and also build new ones.

“I knew a lot of people [on the team], but some of the people I wouldn’t say I knew really well. After a couple weeks, we’ve gotten pretty close and it’s been nice to know them,” Wightman said.

Before joining the team, Wightman spoke with the head boys coach, Matthew Denlinger. The girls coach, MJ Saunders, he knew previously as well.

“I talked with the head coach, Mr. Denlinger, in the summer when I wanted to do [cross country] because he wasn’t sure when they would start it. We at least knew each other a little bit and then I’ve been friends with Coach Saunders’ son, Aiden, for a long time now so I [also] knew her pretty well,” Wightman said.

Even though he has found many things that he enjoys, Wightman’s least favorite part of the season so far has been the track workouts.

“My least favorite [part of cross country so far] would probably be track workouts because they’re pretty hard. Repetitions before hundreds [are the worst] just because they’re on the edge of being long and then fast [at the same time],” Wightman said.

As well as going to practices, Wightman tries to run on the weekends as much as he can. In addition to training, he also stretches and tries to spend time taking care of himself.

“Outside of practice, normally I have to run four to five miles on the weekends, and then I’ve been having some slight leg issues so I’ve been having to stretch and roll multiple times a day. Also, [I try to] drink water often,” Wightman said.

Throughout the season, Wightman stayed motivated to keep running after he won his first meet, to his surprise, in March.

“I felt pretty good [about winning my first meet,] I was kind of surprised because I hadn’t won one before and we were going pretty slow for that first meet, but it felt good,” Wightman said. “I wasn’t sure how well I compared against the people on my team as well as the people who we run against. [However,] training over the summer definitely really helped me get into a good feel for what the pace would be like. It was kind of a surprise but it wasn’t crazy surprising.”

Denlinger was also excited to see Wightman win his first race since not many athletes ever actually win one.

For Wightman, he was nervous about what it would be like to compete in high school. He has tried to develop strategies to help him cope prior to a race.

“The first meet I was definitely the most nervous because I didn’t know how well it was going to go. I still get a little bit nervous before every meet because I’m not sure how everyone’s going to be feeling and how they’re going to run. Normally, I just [try to] breathe,” Wightman said.

As of now, his goal is to continue his training even outside of cross country season.

“I think a good goal would be continuing my training even not in the school year or the cross country season. [Also,] just getting better times,” Wightman said.

Denlinger’s goals for him include setting personal records for times and making it to All-Districts.

“I would like to see him be All-District (top 15), break 18:00 minutes and place top 20 at our regional meet on 4/14. He ran 18:20 last week and he still has two more chances to do it.  His training has been great the last month and I’ve noticed a big difference in his speed and confidence to run faster,” Denlinger said.

Throughout the season, Denlinger has seen how Wightman has contributed to the boys varsity team even with the many different levels the runners on the team are at.

“Liam has been a key contributor for our varsity team this season. Our boys team has a lot of depth, he was our number one runner at our first meet and ran number four at our home meet at Thomas Harrison on March 17,” Denlinger said.

Wightman is still deciding on whether he will run again next season, but has made significant achievements in this season alone.