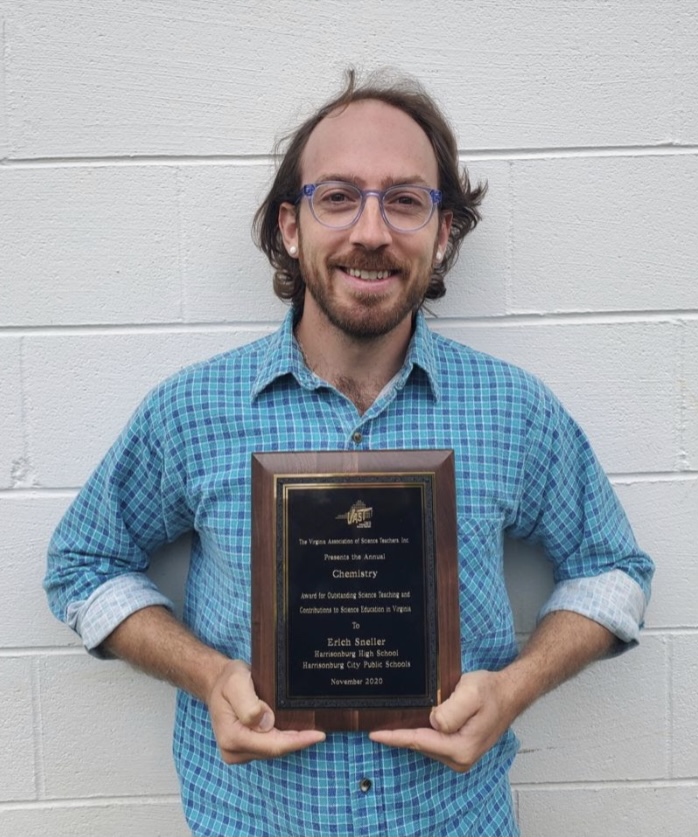 HHS Chemistry teacher Erich Sneller standing with the plaque he received from the Virginia Association of Science Teachers for the Recognition in Science Education Award. This is the first year Sneller won the award.

Chemistry and Earth Science teacher Erich Sneller was awarded with the Recognition in Science Education (RISE) Award by the Virginia Association of Science Teachers (VAST). Sneller was nominated by his coworker and fellow science teacher Myron Blosser.

“VAST is a collaborative group all across the state of everyone involved in STEM. In general, not just the sciences, and each year they choose one teacher from each subject area who receives this award. There’s a Biology award, Chemistry award, etc. Mr. Blosser nominated [me in] 2020. [The RISE award is] given to people that the selection committee deems are doing excellent things in their classrooms with students,” Sneller said.

Winning the award came with mixed feelings for Sneller. When he found out he won, he was excited, but then began to question if he felt he really deserved it or not.

“For twenty seconds, I felt really good. I felt like, ‘Oh my god, this is awesome, this is the highest award that they give to Chemistry teachers.’ It took me twenty seconds and then my Imposter Syndrome set in. [I felt like] people don’t know how I failed in this lab or how I didn’t live up to those expectations or how this could have been better, etc. Then I caught myself and I said, ‘That may be true that I didn’t [totally] max out all the ways that I could have [been involved]. [However,] it’s also true that I was awarded this for certain reasons and that I have done good things.’ It was a mix of [feelings],” Sneller said.

Winning the RISE Award looked a little different this year due to the pandemic. However, Sneller still got to be recognized in a Zoom meeting with other winners.

“I won a plaque and then there was a ceremony where all the awardees came together; typically, [it is] at the VAST Professional Development Institute. Every year, they recognize everyone [that wins] and you go up to the stage. [This year], It was a Zoom meeting and there was a brief bio read about each of us. We did a very brief wave with your plaque and that was it. Usually there’s a little bit more formality to it and it’s [in] a really nice conference center. Everyone is there [that won] and typically there’s an awards dinner where a lot of people will stay and have dinner and talk, then they’ll give you awards. Definitely more pomp and circumstance in a non-COVID year, but it still held the same importance to me. This is my first award from VAST, so even though it was [through] Zoom and I was just sitting in my basement, it still felt really good. [It] energized me, that validation [told me] I am on the right track, and my peers shared that by giving me this award, and honoring me with it. I feel like I got an energy boost [telling me to] keep going, keep doing good things and keep growing and keep repeating the excellent things that I’ve worked on so far,” Sneller said.

In a year, VAST awards this recognition to teachers across the state of Virginia based on the qualifications of the nominees.

“It’s very validating and it’s a representation of all the work that I’ve been doing since I started grad school and [decided] I wanted to go down the teaching path. It feels validating that my peers recognize my work is exemplary and my efforts being something to show other teachers. [I also felt] like there’s other teachers who know so much more about chemistry than me. [However, the award isn’t about] who has the most Chemistry knowledge; the award is about who is doing great work with their students and is passionate [about it]. I’ve been endeavoring in different ways in chemistry to make it meaningful and on a lot of different levels. Validating is the first word that comes to mind of receiving the award from my colleagues,” Sneller said.

“Each year [I] have kind of done something different, my involvement in the science department includes [teaching] Honors STEM Chemistry, General Chemistry, Honors and general Earth Science and Honors Environmental Science taught in Spanish. I’ve also helped in previous years designing advisory lessons and mentoring students. Then in the summer, thanks to Mr. Blosser and Mr. Jackson and their leadership, [I] have been able to be a part of planning and implementing summer STEM events,” Sneller said. “[One] year [we] went to the Florida Keys to do marine biology research, we’ve been to national parks two or three times [too]. We’ve gone on college visits, one year I helped lead a college visit where we went and walked around Hampton University and Hampton Proton Therapy Institute in Christopher Newport University. That was Mr. Jackson and I collaborating and reaching out to professor’s and doing all the behind the scenes work. There’s no requirement of teachers taking students on field trips. When you’re applying [to be a teacher at HHS], they don’t require you to go on college visits and to use some of your summer to do outdoor adventure learning, but the spark that Mr Blosser and Mr. Jackson have, [has] carried forward. Those extra parts [are what] make the STEM Academy great and make the science department great.”

Sneller’s colleagues, Myron Blosser and Andy Jackson are his biggest inspiration for why he does what he does every day.

Sneller makes it a goal to teach beyond the standards in the classroom. That is one of the main reasons that he was presented with the RISE Award.

“[I want to teach] beyond the standards and talk about why it is important to be a scientifically literate person. I think in general teachers think, ‘We have to do the standards, and that’s all we have time for,’ or we say, ‘Who cares about the standard, let’s just do what we want and what the kids want to do today.’ That’s dichotomous thinking [which] is very limiting,” Sneller said.

Winning the RISE award for Sneller told him that he was on the right path. It marked a place in his journey that he is excelling, even through this time which is often tough to be a teacher due to online learning.

“What I’m left with after winning that award is that it’s one really good signpost that I’m on the right journey and I’m going the right direction. It’s like the sugar coating on top, the icing on the cake, do awesome things, and that’s great in of itself, and then like the icing on the cake is getting these awards, and knowing I’m going in the right direction, keep going that way, keep growing, and keep pushing myself. That is how I’m feeling fulfilled in my work, and in my passion and just in my life in general. If I’m going to be spending so much time focusing on school and students and the well being of students and improving society, then it’s got to really be meaningful to me. I have to really want it. That’s I think in large part, maybe why I got that award, is that that’s evident in my classroom when you walk in you know that I’m there, and 100% present and I really want to be and I have specific goals. I’m on this long journey, who knows where it goes, and there is really no end in sight. I think that’s just how life in general is, you just keep going and growing, and then you have these signposts along the way that kind of illuminate it [showing you that] this is a good chunk of the journey that I’ve done so far and let’s keep cruising,” Sneller said.