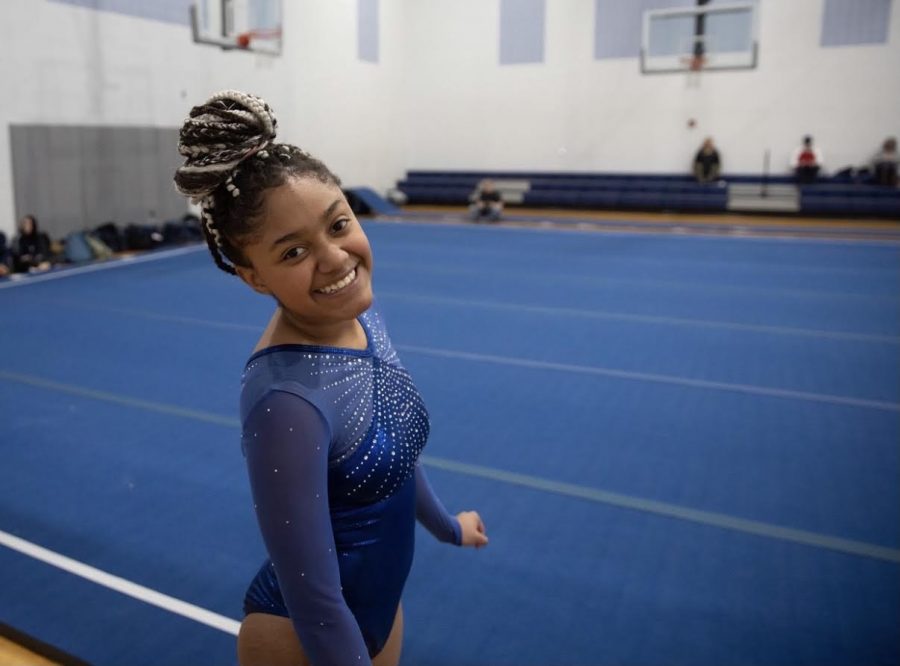 Gotay Dolmo at a gymnastics home meet last year. Gymnastics has had a lasting impact on Gotay Dolmo.

Senior Nissi Gotay Dolmo has been a cheerleader since middle school, however she is mainly passionate about gymnastics.

“I am a varsity cheerleader and gymnast. I really love cheering, walking, but I am mainly passionate about gymnastics,” Dolmo said.

Dolmo’s sister wanted to switch sports with her, so that they could each try the other sport. In the end Dolmo tried cheerleading and her sister tried gymnastics.

“I cheered in middle school and [stopped] for my freshman sophomore year but when my little sister started her freshman year we decided it would be fun to do sports together so I did her sport which was cheer and she did my sport which was gymnastics,” Dolmo said.

Even though Dolmo was mostly passionate about gymnastics, she ended up spending a lot of her time practicing her cheer tumbling.

“I spend a lot of time tumbling at United Elite All Star cheer. I believe I have spent most of my time during the pandemic in the cheer gym,” Dolmo said.

“This year I took piano, and it was a completely new thing to me. I have been involved in music my entire life, but I had never had the opportunity to actually play the piano the way I learn to do it in class. I am also part of the STEM healthcare pathway, and I really enjoyed that [in high school],” Dolmo said.

She interacted with her medical terminology class the most during online school. The teacher used breakout rooms and smaller groups within the same class.

“Even though everything was online, I personally believe that my medical terminology class for STEM had a connection. It’s the class where I interacted with people the most and I believe that’s mostly because of the breakout rooms,” Dolmo said.

Throughout her high school career, Dolmo has gained confidence in herself because of experiences from previous years and lost motivation.

“I think that I lost a lot of motivation throughout the years, but I have a lot more confidence in myself and with what I want to do because of everything I had to go through to figure it out,” Dolmo said.

Throughout her high school, Dolmo gained independence and realized that she couldn’t rely on the help of others.

“I realize that I have to solve most things on my own. [Also that] I can’t expect people to help me out, so being independent was a very important thing for me [in high school],” Dolmo said.

Dolmo was able to benefit from the pandemic and she found activities that she did not know she liked to do. However, it has not affected her well during school.

“Most of the effects of the pandemic have been positive for me because I have been able to find a lot of things about myself that I had no idea I could do or that I was interested in, but academically it has definitely been a negative affect,” Dolmo said.

Dolmo wants current students to take advantage of their time at the high school.

“Do everything you want to do, stay involved, and have as much fun as you can while you’re at it because it goes away in a blink of an eye,” Dolmo said.