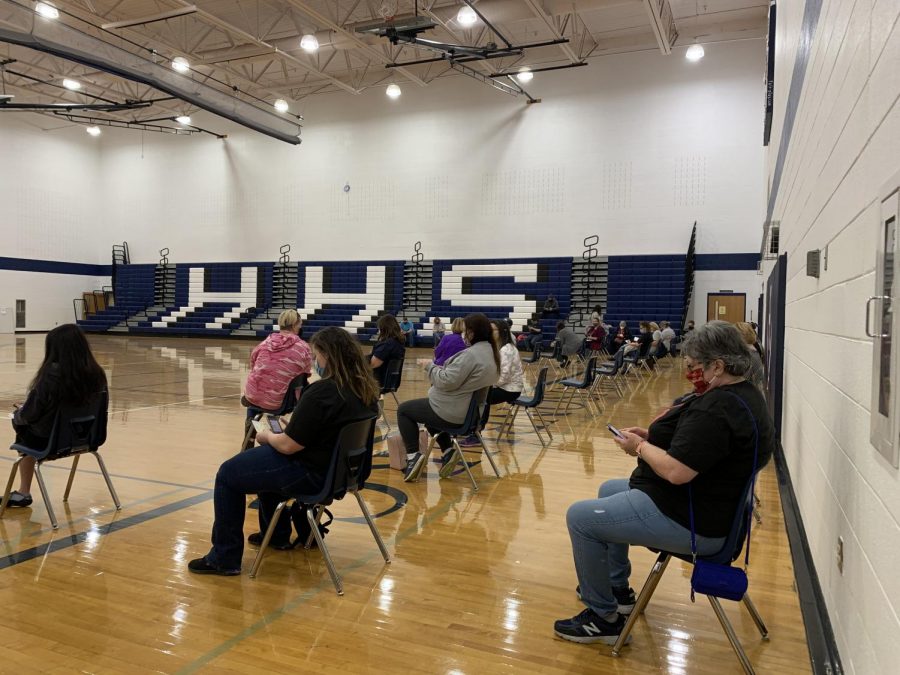 HCPS teachers and staff wait in the gymnasium of Harrisonburg High School for their vaccination.

The first week of March will mark a significant step on the path back to in-person studies at Harrisonburg High School. Starting Monday, March 1, teachers will be returning to the school building to teach their virtual classes in their former classrooms and office spaces. Principal Melissa Hensley believes that bringing teachers into the school building is a necessity in order to both eventually reopen HHS in full and meet the needs of students who require in-person instruction.

“As we look ahead in the future, we hope to be reopening Harrisonburg High School at some point. That’s certainly an undefined time right now, but a part of that process will be getting our teachers back on-site,” Hensley said. “The other reason for [bringing back teachers] is that we are hoping to bring in some of our seniors who are struggling with their courses right now because the online format is just not something that is working for them.”

Originally, all teachers were going to begin teaching their classes from the school building March 1. However, due to vaccine distribution, Hensley is considering creating a window of time instead of a prompt date.

“We may make an adjustment to the original date, March 1, [because] the second vaccine for HHS staff is scheduled for February 26. That [date is a] Friday, and Monday is March 1,” Hensley said. “We’re looking at some flexibility between [March] 1 and 8 to make accommodations based on what we know to be common side effects from the second vaccine.”

Vaccine availability for faculty was also a driving factor for bringing teachers back on-site. The first dose has already been administered, and according to Hensley, this process went efficiently.

“We were able to move people through the vaccination process really quickly. I don’t have the exact number [of staff who received the vaccine], but we had [a lot] of staff participating, which was good to see,” Hensley said. “That certainly is an indicator of our governor’s desire to get schools reopened for kids.”

Most students are participating in virtual learning, but some, like those in the English Language Learners or Special Education program, are receiving in-person instruction. Many of these classes have taken some first-floor teachers’ classrooms. These teachers and those that previously moved between rooms with a cart may teach from an office instead.

“We’re just assigning everybody to a space, [which could be] a classroom or an office. Most of the teachers will have the opportunity to be in their classroom where they only have been, except [for] those teachers floating with a cart most of the day,” Hensley said. “Those folks will be assigned to a permanent location where they will work from that space.”

Most teachers haven’t turned on their school computers in nearly a year, so Hensley is expecting some potential technological issues. Because of this, teachers will be allowed to come into the school building and make necessary adjustments before they begin teaching from that space.

“We’ll be getting folks a time to [come] in to set up their classrooms, get acclimated back into their space, get computers fired up and see what’s working and what’s not. [There’s] going to be some troubleshooting along the way for sure,” Hensley said. “There’s no doubt that’s going to happen, but I think this will help us heading into next fall, too, by having those folks already in here [with] the opportunity to work out some of those kinks.”

With the introduction of an increased number of individuals into the school building, Hensley’s priority is the safety of the students and staff on-site. She will be reviewing the COVID-19 mitigation strategies with the teachers prior to their return, and she is confident that the social distancing plan will ensure the safety of all.

“We’ll be having a meeting to review what [the mitigation strategies] looks like,” Hensley said. “With the teaching spaces themselves, we do provide plenty of space between teachers, even by nature that it’s a classroom or office space. [There’s] six feet [of space] or more [between teachers] in every instance. I feel really solid in terms of spacing.”

The return of the teaching staff does not indicate the soon-return of the larger student body, however. Teachers will continue to run their classes virtually, and this will continue for the time being. Hensley’s next plan of action is to bring in members of the senior class that are in danger of not graduating at the end of the year.

“Our modifications will be focused on at-risk students and those who need slight assistance once we get our staff back into the school and work out the kinks,” Hensley said. “Once we get adjusted and settled back in, then [we’ll look] at bringing in students who need additional help during the school day. Virtual classes will continue in their current model for the foreseeable future.”

Hensley is hoping that such seniors will return to the building around the late-March and early-April, but a definitive date has not been set.

“We’ve identified the pockets of students that we’re going to continue to monitor up until that point to see who we may be inviting in. We do have some spreadsheets and some tracking sheets, but we’re just monitoring students who we know are struggling,” Hensley said. “We’ll have that list available rather quickly and be able to act pretty quickly. We’re putting together the plan without data right now attached to it, so we’ll see how things go.”

Additionally, Hensley has plans to organize activities for the senior and freshman classes toward the end of the semester.

“We’d like to get our seniors back in the building for some other activities as well. We’re currently working on defining what those will be [and] playing loosely with that right now because [we don’t] know what restrictions we’ll have from the governor [and] the CDC,” Hensley said. “We’re also looking at potentially doing something with freshmen. We’re again going to be targeting what’s important [for] the freshmen who need more face-to-face contact with the teacher.”

Ultimately, Hensley is excited to lead HHS back to an eventual reopening, and she views the return of teachers as the beginning of that process.

“I see this as a first step to getting us where we need to be [for] bringing in additional students and getting us in line for hopefully a larger reopening in the fall,” Hensley said. “I’m hopeful, as a principal, to fill our goals as students and staff safely and bring our goals back to life. I’m looking forward to that, but we also need to make note that we need to do it very safely and take the steps we need.”