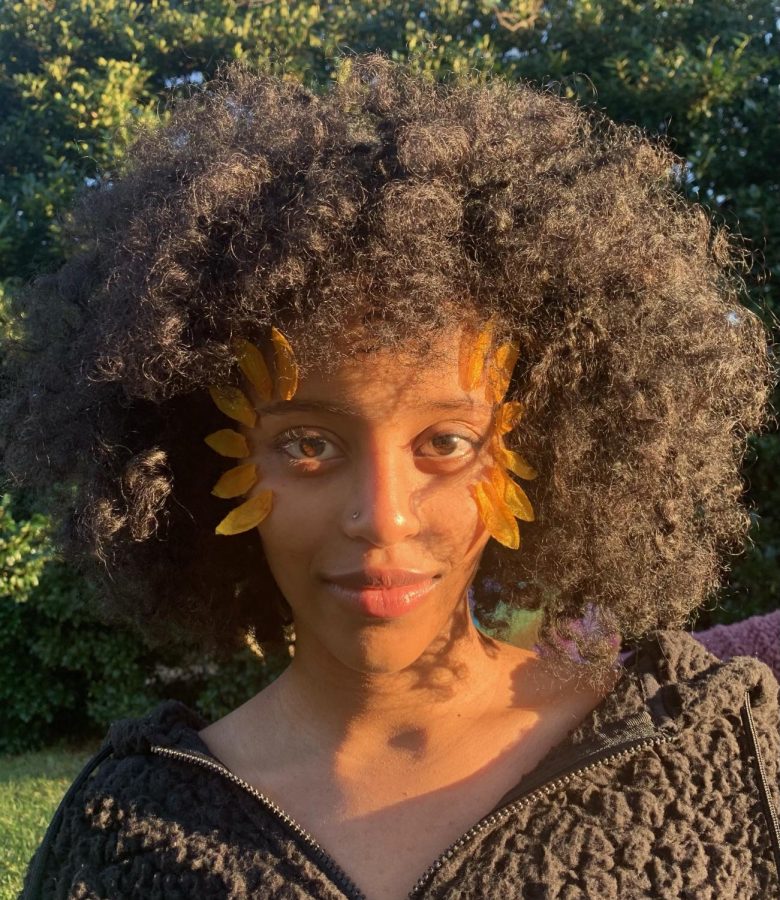 "When I think of a sunflower I think of the words loyalty, love, and joy. I always strive to be not only a sunflower for myself, but for everyone around me," Senior Dani T-Medhin said.

She had never heard of a toothbrush. She had never seen snow or knew white people existed. What Dani T-Medhin did know was within Addis Ababa, the capital of Ethiopia. She knew the trees in the forest that stood an arms length away from her backyard. She knew the field of red sand where kids would gather and play soccer, and she knew ten feet from her house was a hole in the ground that served as the neighborhood’s only bathroom.

Living 7,262 miles away in Harrisonburg, Virginia resided T-Medhin’s mother, who had left for the United States when T-Medhin was three in hopes of obtaining a visa and being granted citizenship. Four years later, T-Medhin, her brother and father joined her mother and left the forest, sand and the life she knew in Addis Ababa behind. Though the initial culture shock faded, what stuck with her were the comments and intense bullying she faced throughout her elementary and middle school years.

“I was so worried about learning the language because I thought that was the only way that I was going to be accepted. Then I learned the language, and then I wasn’t accepted. I was like, ‘what am I supposed to do,’” T-Medhin said. “I still carry the scars with me. I can’t forget a comment. It’s still the root of my insecurities to this day. I came from a place where everybody around me was black. I had no reason to acknowledge my blackness. I was just another Habesha girl. Then I came to America, this country made me acknowledge my blackness. That was another battle I had to face because I now not only wanted to fit in as an American, but I now needed to fit in, not just as an immigrant, but also as a black girl in America.”

While T-Medhin was dealing with being an immigrant and adapting to American culture, her brother was facing problems of his own. Together, the two took karate classes which not only served as an outlet for T-Medhin to manage the anger she felt, but also allowed them common ground to connect.

“I didn’t know what a rock was because I was a rock for so many people. I never really had a rock for myself. I had to learn that I needed a rock so that I wouldn’t break as a human.I cannot imagine being the same Dani without him and his guidance. His support is unstopping, just relentless. There’s no judgment, I can talk to him about anything,” T-Medhin said. “I realized in this world [that] at the end of the day, I will always have myself and my mind, but I am so lucky to have someone who was blood related to me and who was willing to listen.”

For a while, her relationship between her and her mother was strictly parental. Wanting to get to know her, T-Medhin asked her mother to tell her a story about her life. After a while, T-Medhin started joining her parents at traditional coffee ceremonies, where they would share stories from their lives, showing a piece of themselves. Through these conversations, T-Medhin began to not only open up to her mother, but understand who her mother is and the things she’s had to overcome to survive.

“I realized the way she told me that [she loved me] was by waking me up in the morning and doing my English flashcards with me. It was by driving me everywhere that I needed to be for school; it was by baking my favorite cake or by making me my favorite meal. That’s how I received the love and affection. That was her love language,” T-Medhin said. “I started doing [the coffee ceremonies] a lot with my mom like sophomore year. I needed to grow. I needed to have this relationship with my mom, because she’s here forever, and I love her.”

Despite having the support of her family to fall back on, T-Medhin questioned her identity as a black woman living in America. With each part of her came a baggage of insecurities and critiques instilled in her by white America. It didn’t help that when she looked around in her advanced classes, she was usually the only black student in the room. This drove her to wanting to work hard and prove her critics wrong. But no matter how hard she worked, she could not escape the question of whether she would be enough.

“There were points in my life where I wished I was white. I wished I had blue eyes. I hated my brown eyes because people told me that I needed to hate it, that I [needed to] hate my natural hair because it was so coarse and tough to work with. I hated my skin color because everybody hated my skin color. Everything that I hadn’t thought of as a kid from a place where everybody looked like me was completely the wrong thing to be [in America],” T-Medhin said. “There were so many moments where I [said] to my mom ‘mom, I don’t want to be black’ and she’s like, ‘what? What do you mean you don’t want to be [black]?’ It was harder for her to grasp. She was getting really scared because I was like, ‘I don’t want to be black. I hate being black, I hate this. Nobody likes me, I don’t like myself.’”

When she got into high school, she began questioning her identity even further, wondering whether she had the right to speak as an African American due to her Ethiopian heritage and ancestors that didn’t come from slavery. Eventually, T-Medhin came across the Black Student Union. Initially wanting to join the step team, she realized it was so much more. Here, her beliefs and opinions were challenged but also heard. Her hair, that she had become accustomed to straightening in order to fit in, was now proudly shown off, and she began to feel more comfortable in her skin.

“I definitely started learning about me, as a black woman, like how to better take care of myself not just physically, but also emotionally. I recognized how strong I am for just being a black woman surviving in America and how my peers were so strong because they were also black women and men in America,” T-Medhin said. “Having that openness [and] that place that I [could] speak my mind and hear from other people made my empathy grow even stronger. I was like ‘I feel for you,’ but I could also say ‘dang, that happened to me [too].’”

This newfound community inspired T-Medhin to continue BSU and become the president her senior year. It didn’t matter what was going on, she always looked forward to 3 p.m. on Thursdays.

“I want to show these everyone[they’re] not alone. Yeah, the world hates us, but we don’t need to hate ourselves. Acceptance. That’s what I want to give every single black person that is sitting in online school saying, ‘man, I hate myself. I hate the world because the world hates me,’” T-Medhin said. “I have the opportunity to go back home. I have the opportunity to leave to another country. I have the opportunity to forget my entire experience as a black person in America, [but] I don’t want to. I’m so grateful for the African Americans of America and all the things that they went through. I want to continue that. No matter how much I dislike humankind for all of its wrongs, I want it to be a better place when I leave.”

For as long as she can remember, T-Medhin needed to be a doctor. Not only did 2020 force her to confront what she was hiding ,but it also opened her eyes to the possibilities of what the future could look like. After witnessing a line of students outside the middle school counseling office after President Trump won the election in 2016, T-Medhin found a desire for change in the world. This desire grew stronger after the Parkland Shooting in which she organized a school walkout. Ultimately, T-Medhin believes this will lead her to a career in political science.

“It’s so easy to change the name from Parkland to Harrisonburg High School, and that hit me. [I saw] these kids [at the walkout] not laughing [or] joking around. I didn’t care if they cared for it or not, but they participated. They held the signs that they were asked to hold. They held each other’s hands, and they stayed quiet for the eight minutes of silence. That showed me we care,” T-Medhin said. “I want to repay all the kind acts every single person has done for me in my life and pass them on to any other human that I meet. I never had that as a person. And then I had that and I recognized the true value in it. I want to offer that to as many people as I can reach. If I can go to bed knowing that I helped somebody and wake up knowing I’m going to help somebody, I’ll be content.”

For Dani, self acceptance has been a journey. She’s not always been able to say one of her favorite features is her hair or that she admires her strength, but one thing is consistent with Dani T-Medhin: her desire to leave the world better than she found it.