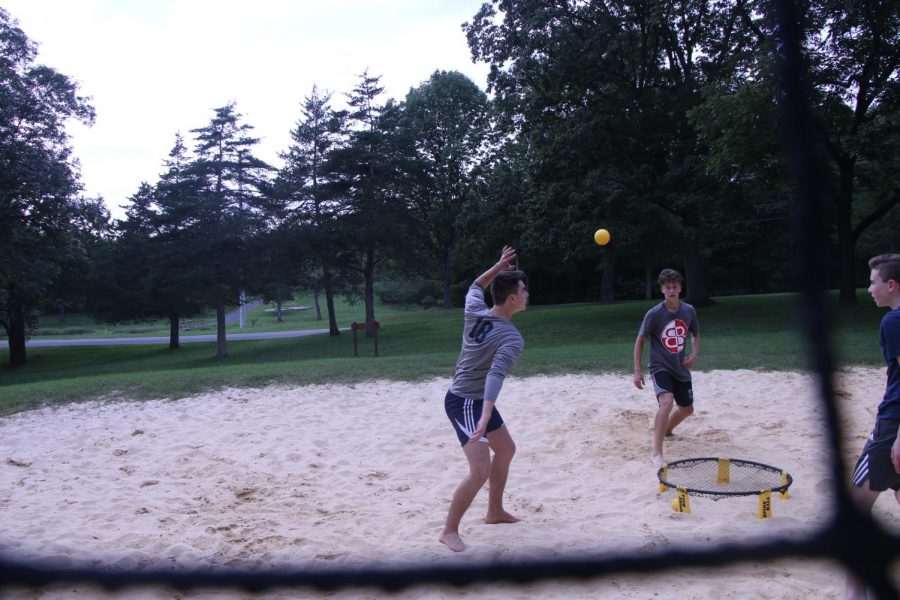 Senior Nathan Brown gets ready to hit the ball into the middle net.

The ball bounces off of the net as another player slaps it back, only for the ball to bounce off of the net, prompting a dive for the ball to save the game. This continues until a groan of anger is heard as the ball lands on the ground giving the opposing team a point. The ball is picked up and served back onto the net lying on four “Spikeball,” plastered stilts close to the ground.

These are the sounds heard near a Spikeball game run by seniors Conor Wells and Nathan Brown in their new Spikeball club. Wells originally came up with the idea of this club and convinced Brown to help him for the love of the game.

“It was my idea because I just love to play Spikeball. When I talked to Nathan about it, we were like, ‘yeah we should do this.’ [I also started it to] spread awareness because it’s an up and coming game. Not a ton of people know about it,” Wells said.

Spikeball is similar to volleyball because of the use of a net and sudden sharp movements used in order to hit the ball. The most important rule of Spikeball is to not let the ball touch the ground.

“It’s [technically] called round net, Spikeball is just a brand of the game. There’s a net in a circle, you put that on the ground and then it’s two [versus] two. One team will start off to serve and then the other team has to return it on the net. It goes until [the ball] hits the ground or a team is unable to return it. That’s when the other team gets a point,” Wells said.

Wells originally got into the game of Spikeball to pass the time with his family during quarantine.

“[My family] was just trying to find ways that we could still have fun even with everything that’s going on. My mom got her hours cut for a little bit, so when we were all home, we had something to do. Spikeball has been really fun for our whole family, so I’m glad I’m able to spread the joy of Spikeball to HHS,” Wells said.

Brown had similar quarantine boredom as Wells and looked for safe, competitive games to play with the whole family during quarantine.

“[My family] has just been stuck at home a lot, so just looking for fun stuff to do that you can do and try to keep safe and not be in big groups. [Spikeball] was something that came up and I think it’s a pretty good thing to do in the pandemic,” Brown said.

They started the club to provide an outlet for student interaction, physical activity and competitive spirit. They also realized that it was a relatively safe game to play during a pandemic because of the natural social distancing aspect of the sport.

“It’s smaller groups of people, it’s not like a football game where you need eleven people. It’s only four people, so you can keep the groups smaller. As far as safety goes, you’re standing six feet apart, but you will be touching each other. There’s [no] guarantee that [you’re not] going to be up close with the three other people you’re playing with,” Wells said. “It kind of seemed like a smart game, out of all of the athletic events that could happen, this might be one of the possible ones [with COVID-19].”

Brown appreciated the social aspect of the club, which has become useful in the time of online school.

“Everything is online, so there’s not a whole lot of interaction. I think it’s a good way for people to come out and still see people that they haven’t seen in six months in a safe environment, of course,” Brown said. “[It] gives the students something to do because online school can be stressful sometimes when it’s the only thing you’re doing at home. [We’re] just trying to give people something to do that’s not school.”

One of the players, senior Silas Benevento-Zahner, said that the club was able to provide him with socialization, as he also attends the Massanutten Regional Governor’s School (MRGS).

“I decided to come out and play Spikeball because I haven’t been able to socialize at HHS because of COVID-19. I also just enjoy playing Spikeball,” Benevento-Zahner said.

Another reason the boys started the club was to encourage safe physical activity to students that are forced to spend most of their time physically inactive.

“Spikeball is played in a small area, but you’re still moving around a [lot]. You can really get the heart rate up. Especially for a lot of kids that are sitting at home right now, they might not be getting a ton of exercise. This is a great way to actually do that,” Wells said.

Sophomore Adam Vanwyk decided to come out and play Spikeball with the club because he didn’t have the players to play without it.

“I wanted to [play] Spikeball with other people for a long time, but I don’t have enough people. A lot of my friends are really bad, so we don’t play,” Vanwyk said.

Although most school events such as sports, games and school sanctioned events are postponed until school opens in-person, Brown hopes to bring some of the community aspect back through the Spikeball club.

“School is school, it’s going to be pretty boring if you’re in person or not, but at least when you’re going you have other things to look forward to [like] pep rallies, school dances and sports. That’s the biggest part that I’m missing: the community aspect. Hopefully we can start to get some of that back here at the Spikeball club,” Brown said.

The Spikeball club meets every Wednesday in a location and time announced on their Instagram page, @hhs_spikeball_, prior to the event. Players must wear a mask and are encouraged to bring a water bottle as well.