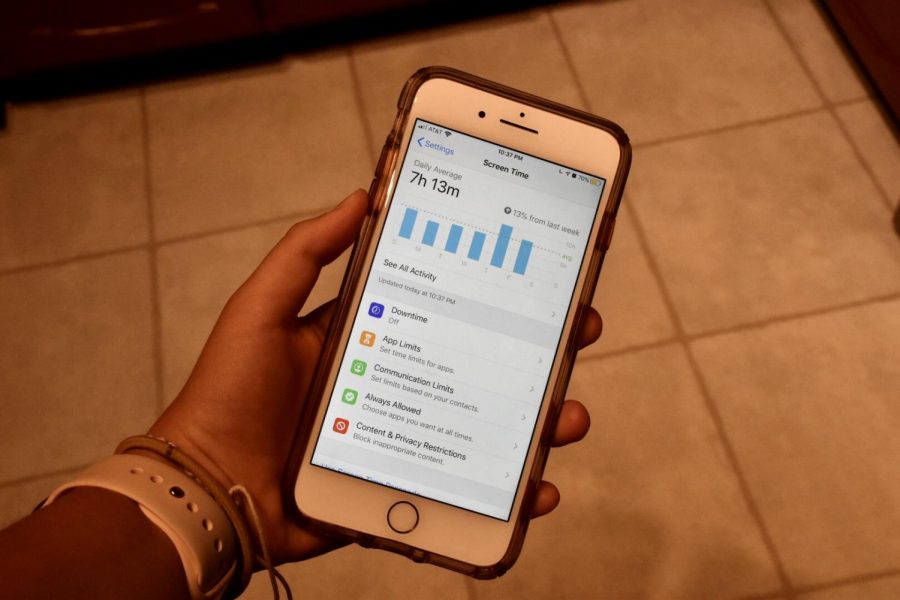 This is an example of the average teen's screen time throughout the week.

Junior Eva Velker admits that she is addicted to her phone, with her screen time shooting up to 9 hours and 30 minutes a day sometimes. Velker recently deleted the social networking apps Instagram and TikTok because she felt that they were taking up too much of her time, disrupting her work ethic, and imparing her self confidence.

“It’s not really that I can’t get off my phone, it’s like I don’t want to, so I chose not to. It’s mainly just because if I don’t want to deal with something emotionally, or if I don’t want to do something, I’ll just use it like an escape, which is not healthy,” Velker said. “[Instagram and TikTok] were just taking up too much of my time, and I would just compare myself to everybody and be like ‘Oh my god I’m not as skinny as that girl,’ ‘Oh my god every is in one of these perfect relationships and I’m not.’ Everyone is just complaining about being single and I’m like ‘I don’t want to be sad that I’m single I just want to be alive.’”

Recently, Velker has spent most of her time on her phone on the app “Webtoon,” which self describes itself as a “… whole new way to create stories, opened up to anyone with a story to tell. We’re home to thousands of creator-owned content with amazing, diverse visions from all over the world. Get in on the latest original romance, comedy, action, fantasy, horror, and more form big names and big names to be…” The content on the app is mostly made up of graphic novels and comics, geared towards teenagers. Along with Webtoon Velker spends a majority of her time on Snapchat connecting with her friends from all over the United States.

“[I spend] more [time on my phone] then I’d like to admit. [I spend on average] six hours and 14 minutes [on my phone everyday], but it’s higher on school days because I have extra time on school days,” Velker said. “I spend most of my time on my comics reading, so reading books. Then I have Snapchat. I really enjoy reading the comics, it’s not like they’re bad, I’m learning stuff from them. It’s not too bad.”

Velker is actively trying to not be idle on her phone as much. Living her life to the fullest without having to use her phone. Sometimes, this strategy is complicated because she has many friends who don’t live in Harrisonburg and her only way to contact them is through her phone.

“I try and just live life and if that includes not being on my phone then I shouldn’t be on my phone. I think it’s more like, I’m trying to make personal connections with people. I do have a lot of my friends that live in different states, so I do spend a lot of time talking to them and being like ‘Hey how you doing.’ I FaceTime some of my friends for four hours sometimes,” Velker said. “I don’t really have that many real friends [in Harrisonburg], but with the friends that I actually do have we all just will put our phones away whenever we are hanging out with each other. We’ll just use our phones to connect with each other when we’re not around each other.”

Spending time on her phone affects her work ethic the most, especially when she doesn’t feel the best. It’s easier for her to just fall back onto social media and escape.

“I feel like we talk a lot, but when we talk, she’s always on her phone or something. She’s always scrolling through her apps. It’s hard to have a full conversation with her. At dinner my mom has to always tell her to put away her phone,” Ellie said.

Many teachers have had the same problem with students and their phones as Ellie has with her sister’s phone addiction. Students aren’t as present in the classroom learning. Head of the Spanish department Philip Yutzy has a different approach to phones in his classroom. He and the other spanish teachers require that phones and backpacks be placed near the front of the classroom to avoid problems with phones in the classroom.

“It has hindered student learning in the classroom because they are very distracted. However, it has provided them with ways to get information very quickly,” Yutzy said. “It didn’t take long to realize that students were being affected very poorly in their language acquisition because of the phones. As a department we just started figuring out ways to get people disconnected to their phones during class.”

A common misconception among parents is that all screen time is bad screen time. Computer science teacher Perry Shank believes there are two types of screen time, passive and creative, one better than the other.

“I think there are two different types of screen time that [we] should be aware of. One of them is passive screen time, which is just passive scrolling and playing games and things like that. There is another type of screen time where you’re building and creating and using computing as a tool and I think it is important to discern the difference between those two,” Shank said.

As a parent of younger children he believes that it is important to help kids learn about the technology without encouraging passive screen time.

“When you think about any kind of [screen time] regulations you might put on a kid. For my kids they are only using technology if they’ve earned time through doing chores and things like that. Then they can use computing as a tool for doing homework and things like that as long as they can show me that there is homework for it. I’m really mindful about just idle time on the internet. I always want them focused specifically on a certain game or certain activity,” Shank said.

Our school administration has also started putting phones into a locked cubby in the office if a student’s phone causes a problem in the classroom. Assistant Principal Eric Miller helps run the cubbies here in school.

“Typically before a phone gets put in a cubby there’s been conversations, the teachers asked multiple times for them to put the phone away, the teacher’s gotten administration involved, we’ve called home. If it continues to be an issue we tell the kid, ‘Look if your phone continues to be an issue, we’re going to lock it up.’ Let’s say it’s been something specific that day and they just won’t [get off of their phone] we might just lock [the phone] up for a day and say ‘Look if it comes back out then we’re going to do a week.’ If there’s been an ongoing conversation, it’s been locked up before then we might just say ‘It’s going to be a week.’ Some kids decide to leave their phone at home, which then they say they’re going to do that and they don’t, and then if we see it then we’re going to lock it up. Really it’s trying to get the parents involved because I mean alternately who’s paying most of the phone bills when a kid’s in high school, the parents,” Miller said. “Unfortunately some of that is lying on administration and teachers because we’re doing the parenting [at school]. Just take the phone away. If you’re kid’s not going to follow the phone rules then don’t let them have it. It’s that simple. Then you get the argument that ‘Well I want my kid to have their phone because they stay after school.’ My son has a phone in school, but my son also doesn’t take it out and use it when he’s not supposed to. If he were to do that, well guess what, he isn’t going to have a phone at school. That’s kind of where it’s at. It really depends on the severity of it and how many times it’s been an issue.”

Being an administrator on campus involves a lot of teacher observations. Through these observations Miller has been able to see the different ways in which teachers combat phone usage in the classroom and whether those ways work or not.

“[Teen phone usage] can be positive, it can be negative. Ultimately it falls back on the teacher that’s running their classroom I think because phones can be used, obviously you’re using it for class right now to record me, so like that’s where [phones] are a benefit. When kids need to do research, they need to access Powerschool, there’s so many positive things about cell phones that I think would probably outweigh the negatives. Is it a deterrent for some kids to be distracted and play games and stuff, sure,” Miller said. “If a teacher is running a classroom that is engaging and fun and interesting, then the kid’s not going to want to be on their phone. Then you have some teachers that build in certain phone time use into their class, like ‘Hey if we get through x, y and z, then I’ll give you three minutes for a quick little phone break, to decompress,’ which I think is good too. Those teachers typically don’t have issues with phones because the kid knows ‘At 9:55 I’m going to have a chance to use my phone.’ Part of it is classroom management and part of it is that I do think that the positives outweigh the negatives.”