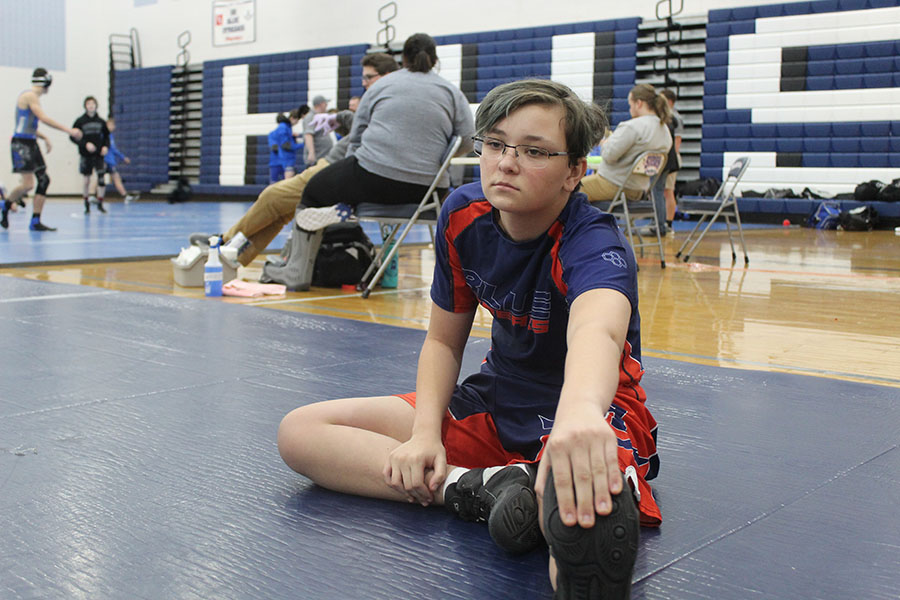 Freshman Scott Lambert stretches before a wrestling match. Wrestling involves a lot of physical strain for Lambert. “My favorite part is that even though you are competing individually, the team is one family,” Lambert said. “[The hardest part is] how much physical training it takes to wrestle.”

When the competition drastically increases and the work gets harder, athletes are forced to make a decision regarding whether or not they will continue to play their sport. For freshman Scott Lambert, the transition in his wrestling career from middle school to high school has been eye-opening so far.

“[The biggest difference is] how intense the wrestling is when you actually compete. At Skyline, it was more if your head gear falls off we have to stop the time. In high school it’s wrestle until the time is over unless someone is going to get hurt,” Lambert said.

Lambert first became involved in wrestling at Skyline Middle School, and will be entering his first year competing at the high school. Lambert finds many benefits in wrestling, but also admits that it takes a toll on the athletes body.

“My favorite part is that even though you are competing individually, the team is one family,” Lambert said. “[The hardest part is] how much physical training it takes to wrestle.”

Finding his second family, Lambert is a proud transgender male. Lambert has found that his team doesn’t have any opinions and has been supportive throughout the process.

“Mostly, they are all supportive and they don’t care. They just treat me as one of the boys. [Coach Bower] has [also] had a very big impact on me. He is trying to help me through my first year and the transition here from the middle school,” Lambert said.

Not only have his teammates been supportive, head coach William Bower wants Lambert to feel comfortable and welcome.

Bower has coached wrestling at Harrisonburg for five seasons and will be entering his fourth season as a head coach. Similar to Lambert, Bower finds many incentives in the sport.

“Helping to build relationships with the wrestlers [is my favorite part.] Being here for four years now I have gotten to coach some people for [all] four years. It is really cool to see them grow from being a freshman to a senior and see them improve their skills,” Bower said. “Not only just improving their wrestling but improving in school and how they treat other people, so it is definitely rewarding to see that.”

In addition, Bower has gone through some struggles alongside of his team. Over his years of coaching, he has adapted to combat these challenges.

“The hardest part is trying to find a good way to keep going when students lose. Obviously nobody likes to lose; especially [in] wrestling, sometimes it is really tough to take that loss because it is not as much of a team sport. You can’t put that blame on anyone else besides yourself. I am teaching other wrestlers that it is okay to lose and to not be 100% successful in everything that you are going to do. As long as you keep trying to be successful then you are still trying to get better, which is definitely a good thing,” Bower said.

Bower first met Lambert in the off-season last year when Lambert came to him asking to practice with the team. Bower has had a good experience coaching Lambert so far this season.

Bower and Lambert have collaborated to make a plan so that Lambert can reach all of his wrestling goals.

“I really hope that he just finds some time to start lifting. We have talked about that and he definitely wants to try and get a little stronger for next year. I think that he has talked about possibly wrestling in the off-season,” Bower said. “My big goals for him will be whatever he wants to do, I do not want to push him into doing stuff. I try to keep it fun and if the team wants to do stuff in the off-season then that is up to them but I always recommend it.”