Marin tours with ‘The Book of Mormon’ 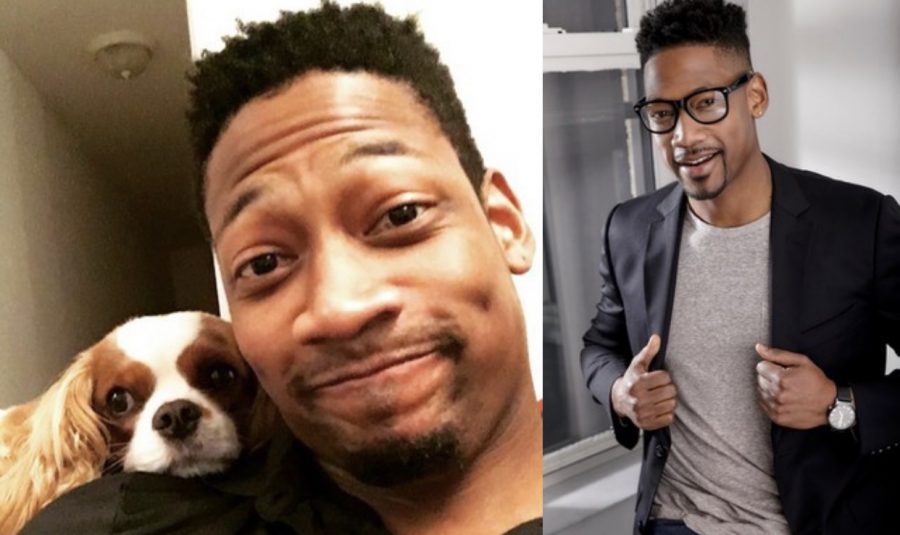 This is a small portion of Marin's picture collage on his website, linked in the story.

Josh Marin is a 2008 graduate from Harrisonburg High School who is living his dream: being on the road with the National Broadway Tour of “The Book of Mormon.”

“First of all, [being in this show] is epic. It’s a great show, I think working on a show that has that kind of humor and the different dynamics of that particular one is so fun to do. I’m part of the male African ensemble, so I have a few feature roles throughout the show; I just kind of pop in and out. The majority of my work is to be part of the very vibrant ensemble,” Marin said.

“I did four years [at VCU] and then stuck around for another two years in Richmond to fill out my resume a little bit more and put some roles on there that I thought would be important to have for my specific type,” Marin said.

Marin then moved to New York City to see what he could do with his skill set.

“At the end of 2014, I moved to New York and just kinda grinded it out. [I] moved to three different places in New York, did some small stage readings here and there. I did the service industry thing, definitely was a server for a while and then finally was able to get an agent. From there things have just taken off. I got an agent and then two weeks later booked Book of Mormon, and I’ve been on the road ever since,” Marin said.

Marin’s experience with performing in high school musicals made him realize that making theater into a career was a very tangible goal.

“[High school] had a massive impact on my career. This is where I recognized that [acting] was something I wanted to do for my life, but also something that was possible for me. There were a lot of influential people in my life, specifically Mr. Stan Swartz. Sarah Stevens was a huge vocal coach at the time, helping us with the shows [too],” Marin said.  “My peers who were also doing what I was doing, Drew Sease, John Gardner, Nick Melton, just to name a few, [influenced me]. They were people who were consistently encouraging me to go further, to go for it. So the real musical theater part of my career started in high school because that was the first time I did huge musicals.”

He figured out his exact career path while in college.

“From there, moving to Richmond, [I] definitely did a lot more musicals there in school, and then once that became a little more consistent, I said ‘musical theater sounds like the track I want to go.’ I like to do it all: TV, film, commercial, but my main thing right now is musical theater,” Marin said.

Marin’s experience with acting and musicals before high school included some elementary school shows and three musicals at Thomas Harrison Middle School. He always knew he had the capability to make it big.

“[Musical theater] felt like something I always knew I wanted to do. There wasn’t one specific moment in time that I was like ‘Oh wow, that’s what I want to do’. It literally is something that I knew from a very early age. I was talking to my mom now that I’m back home, and she was saying that since I was two years old I was telling her I wanted to be an actor. Now, how I knew that at that age, I don’t know. I think it just goes to show that this is exactly what I was put on this earth to do,” Marin said.

“Beauty and the Beast” was Marin’s senior year musical, and after going through the process of auditions and callbacks, he was “the most nervous [he] had ever been.” The reason for this nervousness was because he had a shot to get The Beast. It ended up working out.

“Beauty and the Beast for sure, without question, was my favorite show. I got a chance to play The Beast and Elana Swartz was my Belle, Gaston was Drew Sease, Lumieere was John Gardner, Maurice was Nick Melton, so some of my really good pals were a part of that. Beauty and the Beast was definitely the pinnacle, and then I would say Oliver was another really, really fun show to do. My first show in high school was Seussical, so I got to do that one with a lot of good friends too,” Marin said.

Marin got into musical his sophomore year of high school, after a major missed opportunity the year before.

“I didn’t [do musical all four years]! This is a sore subject for me. My ninth grade year we were at the old Harrisonburg High School on High Street, and they had auditions for the show which was Godspell. I was so nervous to audition for the high school play I told myself I was going to take a break from acting this year and not do the show,” Marin said.  “And of course, they take Godspell to Scotland for the Fringe Festival. I was so mad at myself for not doing it, so the next year we were doing Seussical here at the HHS on Garbers Church, so my expectation was that we were going to go back to Scotland. That was not the case. I did musical every other year after that.”

Marin appreciated returning home to Harrisonburg to see the program that turned him into the actor touring a Broadway musical.

“It’s really cool to come back and see the place that established such a dynamic part of my career, and do see it expand and grow. Now there’s a whole dance department and things of that nature. It’s just wild to see a place that was so influential on me to be expanding and doing bigger and better things. It’s great to be back home and see some of my favorite teachers [and] faculty members. It’s a good feeling to come back home and rejuvenate before hopping back into the big, bad world,” Marin said.

Once the tour with this show ends in June, Marin plans on being in Hamilton next.