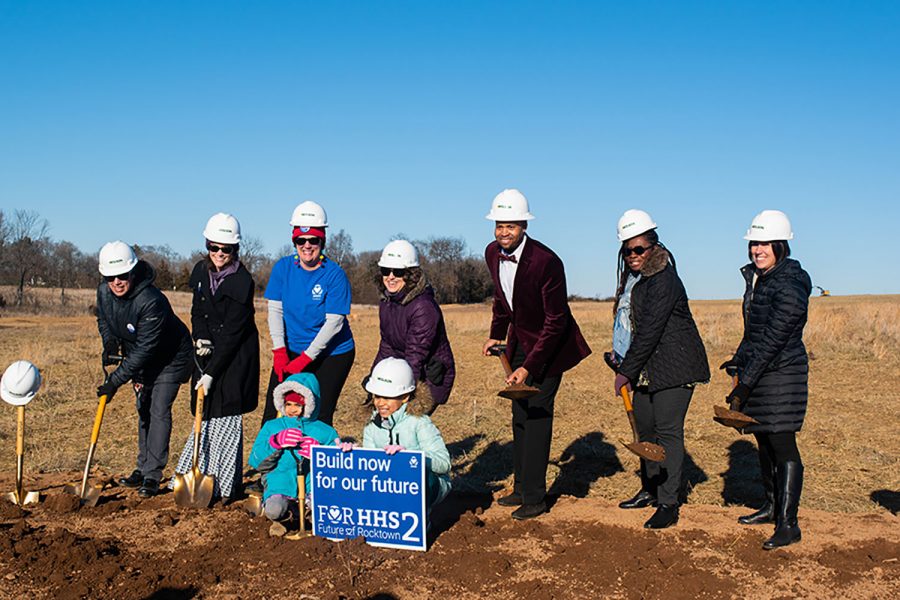 Representatives of the For HHS2 group dig into the ground at the new site. Members of the community and city council attended the event to celebrate the start of the construction of the new high school.

Tuesday Jan. 21, yet another milestone was reached in the process of building the new high school in the city of Harrisonburg. The ground-breaking ceremony was held at East Kaylor Park Drive, located off South Main Street. The ceremony consisted of community members and city government officials putting the first shovels into the area of land that will become the second high school by fall of 2022. One of the main members present at the ceremony was superintendent Dr. Michael G. Richards. Richards, who has been the superintendent for the past nine months, was overwhelmed with emotions during the ceremony.

“I have only been here nine months, but it’s still felt like forever because I know that people have passionately been advocating for this for a long time. I could vicariously feel the relief of getting ground broken on this,” Richards said. “There is definitely some relief involved, I know that is has been a struggle for the folks who have known that this was needed for a long time and have been continually feeling like they take one step forward and two steps backwards.”

Richards is not only relieved following the ground-breaking, but also joyful that this will be the start of a process that has been a long time coming for the city of Harrisonburg.

“I’d say the emotion for me was relief and joy. We have finally been able to do what is right for the city. Not just for the students who will be in that school, this is right for the whole city. We are a growing, dynamic community and I’ve seen and read about communities that have not addressed growth appropriately and they end up stagnating and they end up with some pretty serious economic and social problems. It is a good thing that we are matching our growth now with some building,” Richards said.

While the ceremony was a major accomplishment, there are still plenty of things that need to be done in the near future in order to maintain the goal opening date for the fall of 2022.

“In terms of operational decisions, planning teams will be making decisions this spring in terms of staffing and that sort of thing. Another thing that is interesting are the zoning decisions. We have to figure out how we are going to divide the city so that half the city goes to the current HHS while the other half will attend HHS2. By Virginia law, redistricting is a school board decision, I can make a recommendation, but it is up to them ultimately,” Richards said.

Not only do the zoning decisions need to be finalized this spring, also changes that may affect both the old high school and the new school.

“The school board has a new policy on naming that will involve a committee, the public and there will be hearings. Also, HHS has a name, but now that there will be another Harrisonburg high school… there may be a naming of this school as well, but we are not sure yet,” Richards said. “The school board chair and vice chair will sit down and talk about when those things will happen, but they need to happen well in advance rather than the spring before. Families and students need to plan all of that before.”

Throughout the process of the planning and building of the new school, Richards has formed valuable relationships with many important figures in the Harrisonburg community.

“It has been really really great working with the school board on this. They have known for some time that it is necessary and they have been behind it. Working with the city is a different kind of thing. The city has to focus on lots of different departments and we are only one of them. We are the biggest by far and the most expensive but they do have other departments to worry about as well. Generally, it has been a good relationship,” Richards said. “The city manager Eric Campbell and I meet regularly and we work well together. The city council didn’t all agree, they just had disagreements about it. The city government has been very collaborative with us, Mr. Campbell and Mr. Ande Banks, have been wonderful. All of the permits and everything we have needed has come through and they do a lot of good work over there.”

Moving forward, Dr. Richards and his team are focused in on two different sets of dates. Those involved in the project have many goals to work towards in the future.

“There are two different sets of dates, one of them is the building set of dates. The builder has established a building schedule with us so we know when they will be leveling some ground, put in a foundation, doing the wells for geothermal energy sources,” Richards said.

In addition to the goals for the builders at Nielsen, there are also some technicalities that need to be worked out prior to the opening of the school.

“The other set of dates is the operational set of dates, such as front loading some positions into the new high school because we need them with the number of students. We have to have some new teachers and a new administrator,” Richards said.

When deciding what teachers will be where, one of Richards main focuses will be to work closely with the staff to do his best to satisfy the needs and wants of all faculty.

“We want to work with the faculty, we want to know what they think is best. In some departments, it might be best to work in both facilities but in others it might be best to split teachers between schools. I also want faculty members to have some say in where they are,” Richards said. “We can work out where people will be so that everyone is happy, but it is also possible that there will be some people that have to move and they don’t want to, that is always a possibility.”

“I am interested to see how students feel about it. I have talked to my council and gotten some feedback. I intend on talking to more students outside of my advisory council to get their perspective, what they envision their experience to be at the new school and between the two schools. I definitely want student input on that, I will continue to seek those perspectives,” Richards said.

Despite having many things to work through with various groups of people, Richards has high hopes for the potential of the school and what it will have to offer students, faculty and the city of Harrisonburg.

“I am hoping that, well I’m not just hoping, I’m sure because I am the one planning it, operationally the team will come together and come up with the best high school experience that we can with this new added resource. They’re already working on that, I’ve got a team here at the school and they have been working for a couple months now on putting programs in place that are quite unique for high schools… that is to share facilities,” Richards said. “Harrisonburg is a place with limited resources but I still want our students to experience what wealthier divisions experience. That includes great STEM facilities and top fine arts facilities. We have an opportunity to have both of those if we can share them. That is my main hope but it is more than a hope… hope is not a plan, this is a plan.”