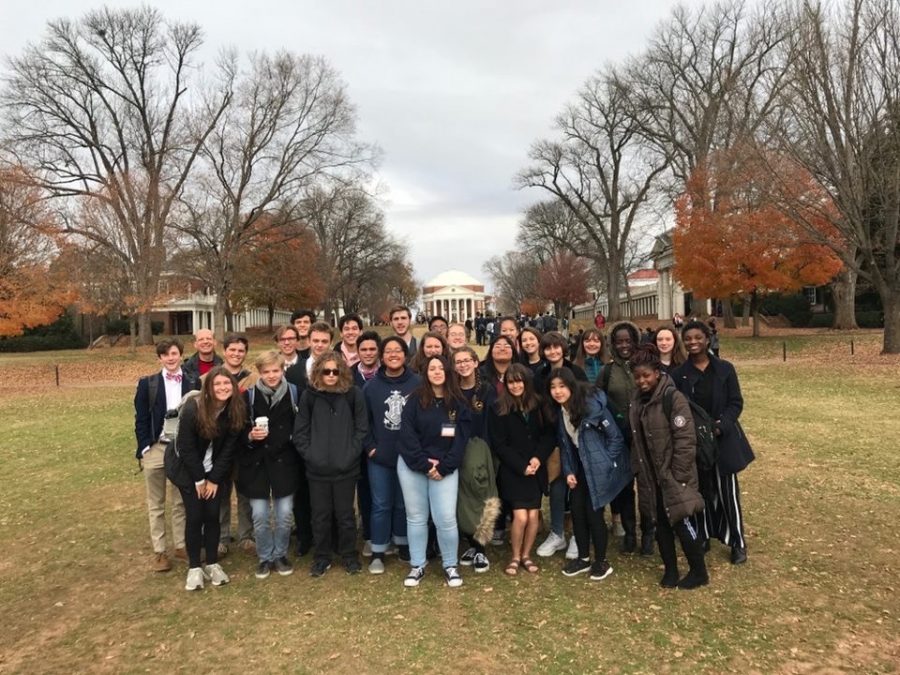 Students attend the Model UN conference and take a picture in front of the Rotunda.

While sports and most common clubs are well known at Harrisonburg High School, the Model United Nations club is something that many people don’t know about. Starting with only four people, Model United Nations gives high schoolers the opportunity to participate in real life simulations of debate and is a good example of how the United Nations works. Nov. 15-17, the MUN club attended the first Model UN conference of the year, VAMUN, which took place on the UVA campus. Students were given a specific country and committee, and wrote a position paper based on two different topics depending on which committee they were in. Twenty eight students went along with history teacher and sponsor, Lawson Yoder. Sophomore Abigail Fornadel was one of these students. Attending for her first time, Fornadel was looking forward to discovering new things and simply having fun with her friends.

“I [was] excited to see what a Model UN trip is like and to experience it with my friends. I [was] also excited to learn more about other countries from other students’ presentations,” Fornadel said.

Not only was the conference a new experience for Fornadel; the entire aspect of the club was something she had never done before. Fornadel was able to expose herself to a new group of people through Model UN, while still feeling comfortable and like she was not in it alone.

“Most of my extracurricular activities involve sports. I play soccer year round and I run indoor track so I decided that I needed to join some type of academic club and [I] knew people who were willing to try it with me,” Fornadel said.

For people who have never experienced a Model UN conference or preparation, the steps leading up to the conference can seem daunting. After receiving her country, partner and committee, Fornadel was thrown into the first step: writing the position paper. These papers would be turned in during the conference and described your assigned country’s background and stance on two issues.

“It [was] hard to learn how to write a position paper all by myself. Me and my partner worked for hours on our paper and had to figure out how to write it all on our own,” Fornadel said.

After overcoming these challenges and working through the conference, Fornadel felt like the outcomes were positive and she was glad to have joined the club. Not only did the trip serve as a social event, for Fornadel the academic portion of the experience was just as rewarding.

“I think it’s a good club to be a part of because you get a chance to expand your knowledge on countries you’ve never heard of and meet new people at conferences,” Fornadel said.

On the other hand, senior Leif McCoy was not new to the experience. As one of the original founders of the club at HHS, McCoy was able to jump into the conference with confidence and continued to enjoy the main aspect of Model UN, the debate.

“I enjoyed the committee sessions and productive debate on the topics,” McCoy said.

Along with three others, McCoy started the club and took part in turning it into what it is today.

“A couple years ago we founded the club here at HHS and at the time I just wanted to get more into international relations and it seemed like a really good way to do it,” McCoy said. “There were four of us at first, it was a really small club. It was Ritt Culbreth and I, Philip Hart and this guy named Tyler. We just went up to Mr. Yoder’s room seeing that he was the sponsor from years past and asked if he would be willing to help us do it again.”

Towards the beginning, McCoy faced the challenges that any newcomer to the club would face. The new experience was something that not many were used to. McCoy, however, was able to quickly catch on and used his past debate skills to his advantage.

“It was an entirely new experience for all of us and just understanding the process and procedure and how to write resolutions was a learning curve that we all had to overcome,” McCoy said.

Remembering his first time competing, McCoy understands how the process can be alarming at first. Now as one of the main leaders of the club, McCoy is able to advise others on how to be prepared for the sessions. McCoy was able to learn from not only others from his own school, but students from schools across the country attending the conferences.

“[When it was] my first time competing, it was really really difficult. You get thrown in and you’re like ‘oh my gosh,’ but by the third day you’re starting to get the hang of it and everyone around you generally knows what’s going on or have some idea of what’s going on and they can help you too,” McCoy said.

Although not being the most popular club at Harrisonburg High School, McCoy continues to believe that Model UN is beneficial in ways that are extremely prevalent in today’s society.

“I think any club that discusses challenging issues that affect our lives and affect our futures, well I would consider that club important,” McCoy said.