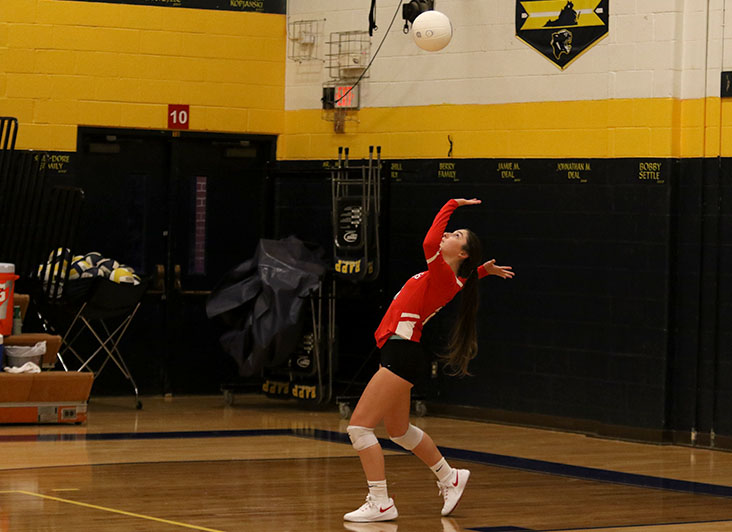 Senior Abby McCollum serves the ball during the first set of the Streaks' 3-0 loss to Rappahannock County.

On Sept. 10, the varsity volleyball team traveled to Rappahannock County High School to face the Panthers for the second time. Throughout the game, the Streaks had an effective offense, with the other team receiving many blocks, tips and kills from both front and back row players. The Streaks lost three straight sets 9-25, 17-25 and 20-25, ending with a 3-0 loss and making their overall record 3-3.

Senior Atilia Thomas began the first set with an ace. Sophomore Jay Garcia then recorded a kill, putting the score at 2-1. At 2-4, with the Panthers leading, sophomore Juju Butler slaps down a kill. Junior Sophie Sallah then gets an ace with the score at 8-11. The Panthers took multiple scoring runs and the score ended at 9-25.

The Streaks started the third set with the lead as sophomores Butler and Garcia each had one kill apiece. The Streaks manage to keep the lead, with a kill apiece by sophomore Ellie Muncy and Garcia again. However, the Panthers responded with a string of kills, taking the set 25-17.

The Streaks will play their next game on Sept. 12 against Warren County at HHS.