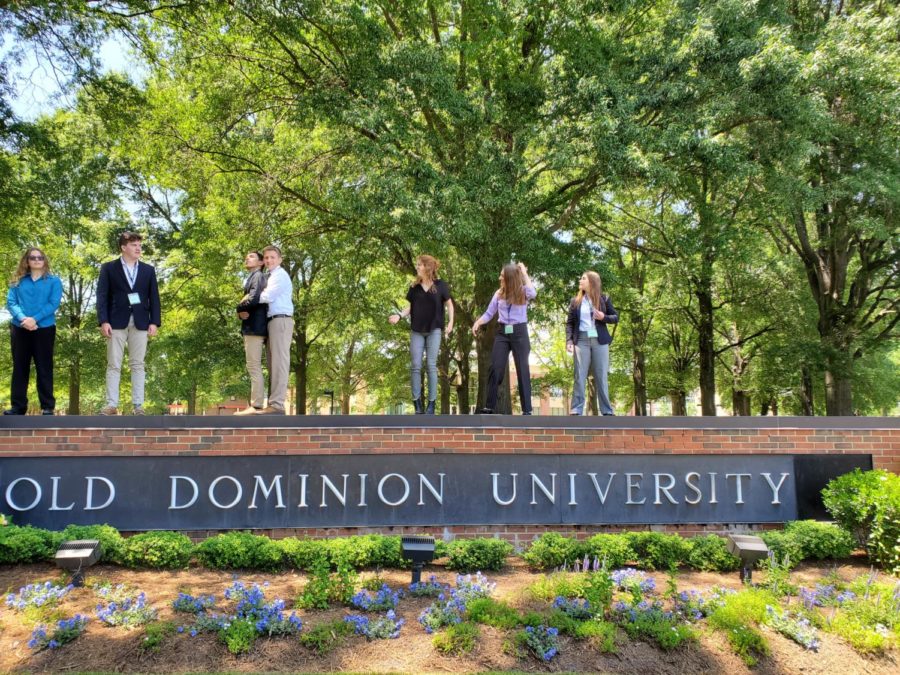 Each year, the Virginia Junior Academy of Science (VJAS) accepts papers from students across Virginia to be presented at their annual Research Symposium. Students in HHS’s Governor’s STEM Academy are encouraged to participate, and this year’s group consisted of three topics that all received recognition at the symposium May 22 at Old Dominion University.

Junior Jadelin McLeod presented solo on The Comparative Tensile Strength of Two Chainmail Weaves, which earned her first place in the Engineering category. McLeod’s presentation was a passionate explanation of her process and results, which included creating chainmail using two different weaves and analyzing their deformation and failure under stress.

“I like chainmail, so that’s why I chose to do the project. It’s easy to be excited about something you like.

McLeod was surprised to hear her experiment had received first place. Last year, she received an honorable mention for her research on South Asian Tadpoles. Her written paper from this year also earned her $500, but McLeod still has improvements she would like to make.

“Definitely I would want to run more tests, and different kinds of tests. Four of the samples got corrupted because of testing irregularities, so I would want to fix that,” McLeod said. “Apparently I had a bunch of grammar mistakes in the paper, which I probably should have revised. Stuff like that.”

“It was the most well documented project we’ve done in engineering that showcased everything [the project] entailed,” Posada said.

“I didn’t feel nervous. In my head I thought to myself, ‘I’m excited,’ trying to trick myself,” Posada said. “What I was most confident about was the question section of [the presentation]… We were able to answer them really well.”

Posada found the opportunity to practice the engineering process and presentation skills highly beneficial and encourages other students to take advantage of of the experience.

“Everyone who is interested in this type of environment should try to go to VJAS, at least send a paper in,” Posada said.

The final group to present consisted of seniors Christa Cole, Andi Fox, Noah McIntire and Hannah Miller. The seniors began the research project with other STEM students in their biotechnology class but decided to take the research further. After collecting deer organs from local hunters, the class x-rayed the samples to look for the presence of lead. Cole, Fox, McIntire and Miller worked to quantify the amount.

“We spent so much time quantifying the lead fragments rather than going over our presentation. We were feeling kind of shaky,” Cole said. “Personally, I was reciting what I was supposed to say for my slides all around campus and all before the presentation, but when we actually got there it felt really good. When we were practicing in the dorm before, it was nice to run through things, bounce things off of each other, mess with the order of things. As we were going into the presentation we all felt comfortable in what we were going to do.”

The team earned third place in the Environmental Science category, a feat that surprised and excited the team’s members.

“We had walked into this thinking thinking that we weren’t going to place at all. When we were writing our paper, it was awful; we were just throwing it together. We [didn’t] know how it was going to go, thinking we were going to show up and crash and burn, but it would be fine because we’d have the experience,” Cole said. “Hearing that we placed was really wonderful, and we found out on the feedback form that most of the judges gave us a 50/50 on our presentation. What brought us down was the paper… We had a really great topic with [local impact]. In retrospect we wish we would have worked harder on the paper because it had more bearing than we originally thought, but just hearing that we placed at all was really wonderful so we were super excited about that.”