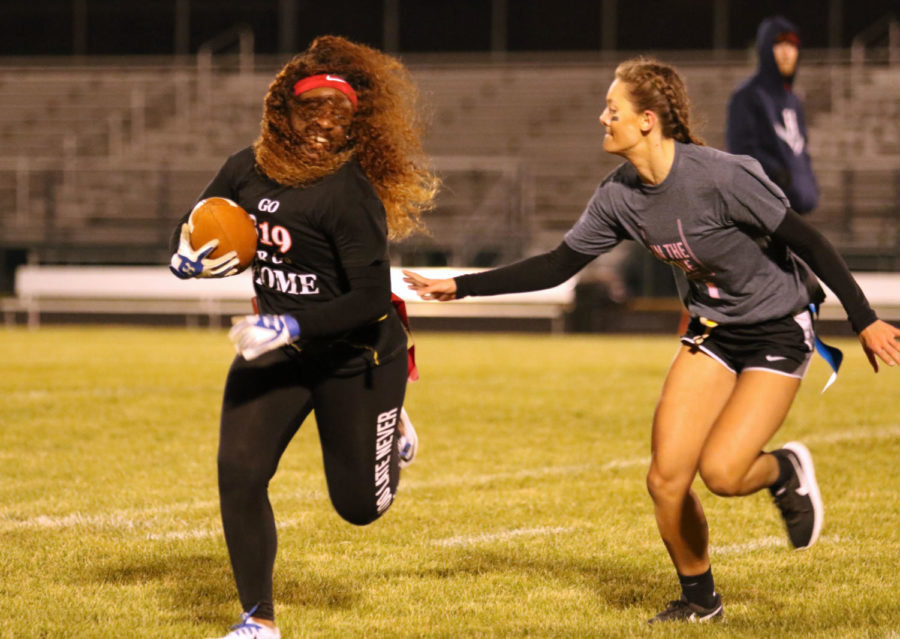 Traditionally there is a rivalry between the classes. Amongst the upperclassmen, there is an annual event held the week of Homecoming, where the juniors and seniors have a chance to prove their dominance. Senior Anne Penrod participated in her second powerpuff game and enjoys it because of the camaraderie built between her fellow classmates.

“I think it is great because it is a good way to bring students, not just student athletes, to come together for a somewhat competitive game. We are also here to just have fun and not get hurt,” Penrod said.

While the game is primarily just for fun, there is a level of competition brought to the field.

“I like the competition because it gets all of us riled up and ready for the game,” Rodriguez said.

The teams are coached by football players and their correlating class, and the players consist of anyone who wants to sign up. Junior Jewelia Rodriguez enjoys having time to spend with her friends.

“This is my obviously my first year doing it because I am a junior. I really like it because all of my friends are doing it and it is just a time where we get together right before the big dance,” Rodriguez said.

While Rodriguez has friends that are also participating, she likes the aspect that not just one group of people are represented on the team.

“Anybody can sign up for this, so it is not like just one certain person and there aren’t tryouts,” Rodriguez said.

For Penrod, this is one of her last events that she will be apart of as a student. She hopes that it will be something she holds with her throughout life.

“I think I will definitely remember it. This year it was pretty organized, we had three practices and [got to the game] an hour early to stretch and warm up. I am happy ithas been going well,” Penrod said.

Along with the game, Penrod has learned more about the game of football, which helps her when supporting the boys teams.

“I, personally, can’t watch a full football game. I get so distracted, but since I’ve done powderpuff I’ve become a little more invested in the game because now I finally understand how some of it works,” Penrod said.

From the coaching perspective, it is different for the athletes considering they are the ones on the sideline. For senior Kenth Bustillo, no matter if he is on the sideline or in the game football is football.