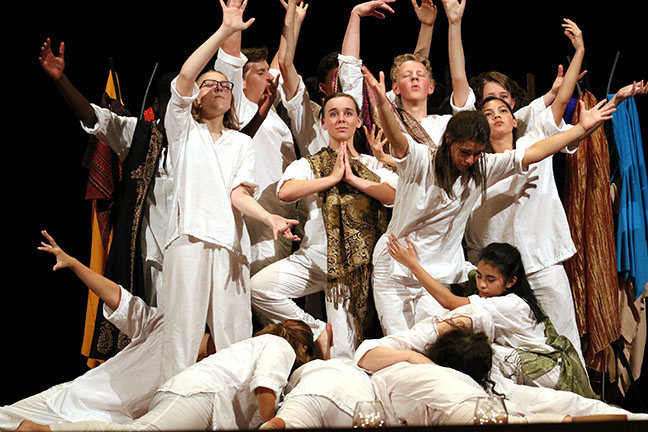 At the very end of the show, the whole cast formed into a tree.

After witnessing sickness, aging and death, a young Siddhartha Gautama set out to discover a solution. Born in the Himalayan foothills of current-day Nepal over 2000 years ago, many know him simply as Buddha.

Siddhartha’s journey to enlightenment has been told for thousands of years through many mediums, including a novel by Herman Hesse written in the early 20th century. English teacher Kevin Plooster from South Dakota adapted this novel into a play, and Siddhartha’s story will now be told on our very own stage.

“Herman Hesse’s novel is one of my favorite pieces of literature. When I first read the novel years ago, I could see the beauty within the writing that would lend itself well to the stage,” Plooster said. “His use of motifs developing father and son type relationships, rivers and the unity of life, and the wounds that cause us to understand the world are so simple and yet hard for people to see when they are struggling in life and just want relief from the spiritual suffering they are experiencing.”

Theater teacher Ken Gibson chose Plooster’s play as the One Act this year, casting 15 students to bring the tale to life.

“I wanted to do a totally immersive piece involving the entire cast, creating the show in a new and innovative way,” Gibson said. “[I wanted] everything unfolding before the audience’s eyes.”

Plooster, who fell in love with writing at a young age, believes the show demands a lot from its cast members.

“The play calls for intense ensemble acting, dancing, puppeteering and music, along with the need for two very strong lead actors; they must all embrace the play as a whole to make it flow smoothly,” Plooster said. “If students do not know how to play certain instruments or dance, they must learn, as most have to rotate into those positions throughout the play. It is a physically intense show and demands hard work.”

Senior Noah McIntire, playing the roles of Buddhist #1 and Debtor, already sees personal touches and changes being made to the original script to better represent the abilities of our actors and actresses.

“Because the script was longer than was [Virginia Theater Association allows it] to be, we already cut it a lot. We’ve already taken away things that were originally in the show. There are probably going to be several things that we add as well,” McIntire said.

Both creating the script and putting it together on stage are processes that involve many rough drafts and revisions.

“The first few weeks [of rehearsal] we [did] table readings, which is where we read the script to make sure we understand what’s going on, what parts we really need to build up to, and what our energy levels need to be throughout the [play],” McIntire said. “Then we start blocking the show, which is where we actually put people on stage. After that’s it’s just refinement of each character… being in the mind of your character so every action you do on stage has meaning behind it.”

For Plooster, the timeline of writing a script requires lot of time, brainstorming and inspiration.

“I first create a chart of plot development areas: root conflict, inciting incidents, crisis, catastrophe, climax and denouement. From there, I begin assessing what characters or ensemble work will be needed to develop the show.  If music and dance are needed, as this play calls for, I listen to songs and watch dances to spark the type of sounds and images I want to create on the stage,” Plooster said. “For a production such as Siddhartha, the set must be easily moved and transformed, so I plan scene endings with the ability to be fluid from one to the next. I constantly revise the play until I feel at peace with the finished product.”

While Plooster strives to find peace with his play, our One Act will chronicle Siddhartha attempting to discover peace and enlightenment as well, and hopefully teach viewers a lesson.

“I think there are messages for all people to learn about themselves. Although it deals with spiritual growth, the play offers a much easier understanding of the world around us,” Plooster said. “I hope people are able to walk away from a performance and feel there is hope for all of us to find peace in our lives. It is truly one of those shows that brings unity to the cast and crew; that alone is the most important part of theatrical productions.”