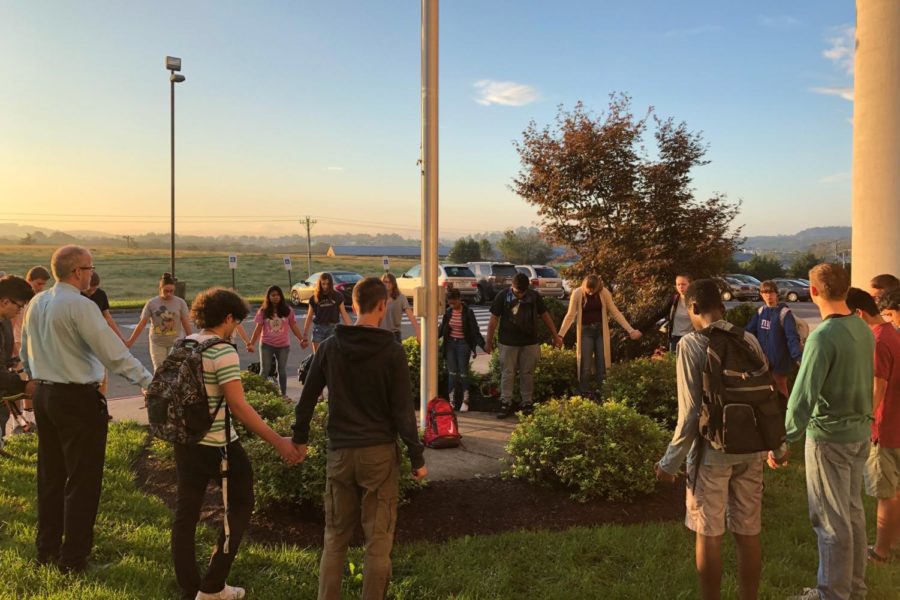 Students at the See You At The Pole event gather around the flagpole in a circle and pray.

With the sun rising above them, over 20 students held hands around the flagpole Wednesday morning, Sept. 26. Senior Gabe Poirot, who hosts religious meetings in the library conference room before school once a week, organized a local unit of a national movement: See You At The Pole.

“I think it was 20 or 30 years ago, high school students saw a need in their school, and they wanted to unite and pray for their school, so they started this thing called See You At The Pole,” Poirot said. “Ever since it has gone viral, and now in high schools all across the country on the fourth Wednesday in September they meet at the flagpole to pray.”

Junior Jenny Arteaga attended the event, and credits a lot of its success to Poirot’s organization.

“See You At The Pole is a nationwide event, but I feel that if someone wouldn’t have taken charge, the outcome would not have been a meeting with such a large number of people,” Arteaga said.

Poirot thought it important to give students at the school a chance to take part in this nation-wide event, so he reached out through the community in hopes of getting a positive turnout.

“I spread the word to local youth groups by emailing and calling them, as well as posting posters all around the school and in bathrooms giving info about the event,” Poirot said.

Arteaga wasn’t initially sure if she would attend, but after meeting with her bible study group on Wednesday morning she was excited to go with them.

“I think the main reason that I liked it was that it was nice to be able to express myself and be able to talk about my faith with people who believe in the same thing as me. I also thought that it was really cool to gather with all kinds of different denominations and be able to pray over each other,” Arteaga said.

To Poirot, See You At The Pole has the potential to make an impact here at our school and at others around the country.

“It helps to unite [us], and to see how a school can be impacted by love and a united force of getting God inside of our schools again,” Poirot said.

The meeting gave Arteaga a positive outlook on the rest of her week, and made her proud to be part of a national movement.

“The overall experience was really heartwarming, and it was just a great thing to do right before school. It was a good start to the day, and it was nice to pray about getting through the rest of the week,” Arteaga said. “I also felt that it was a great experience because our school in the small town of Harrisonburg participated in something that was important nationwide.”