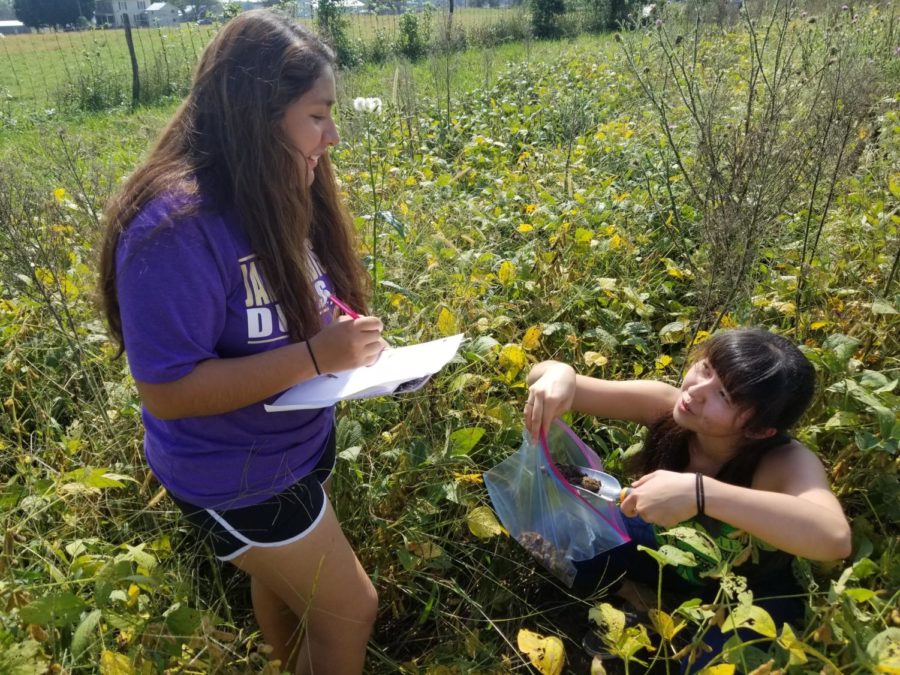 Seniors Alexia Munoz (left) and Marena Benton (right) discuss whether they've collected enough soil. Students were instructed to get enough to fill a beer bottle. Later in the year, they will be using a similarly sized container to plant soybeans.

With mud on their shoes, the STEM biotech class explored farms around Harrisonburg on Sept. 20. Their goal: to collect soil samples from a variety of fields to plant soybeans in, ultimately looking for two differences in genes to send to JMU professor Dr. Stephanie Stockwell for her research.

They plan on achieving this by using Bradyrhizobium japonicum bacteria, which is a nitrogen fixing bacteria found in the roots of soybeans, to create nodules on the roots of the plant. The class will then will crush the nodules, purify them and study their genome. Biotechnology teacher Myron Blosser thought of the idea years ago, and found a partner willing to help.

“I’m always thinking of things to do, and I got this idea that it’d be cool to collect and look at nitrogen fixing bacterias. I kept on thinking to myself, ‘How would you do that? How would you do that? How would you do that?’ and I thought, ‘Well, what if we get soil samples and we simply plant soybeans in them and let the soybeans collect them for us?’ I was thinking about this for a couple of years and I thought it’d be cool to do,” Blosser said. “One day I was walking down a hall at JMU and one of the professors, Dr. Stockwell, was walking towards me and we were chatting a little bit. At one point she goes, ‘So what do you think you’re going to do next?’ because they know I’m always thinking of what I’ll do next, and I explained this crazy idea I thought would be fun about extracting nitrogen fixing bacterias from the soil using soybeans, and she said, ‘Oh my goodness. That’s what I did my PhD work in.’ So she started to giving me ideas about the best ways to do that.”

One of the genes the students are looking for fixes nitrogen, and the other gene causes the bacteria to burrow into the root of the soybean. The changes in the base pairs of these genes are known as cultivars, and that’s the information that the students are sending to Dr. Stockwell.

“The cool thing is that if we do get the [genetic] sequences back and we have [one] that has never been sequenced, which is very likely, the kids get to name it. They can put their name or put whatever they want, like ‘Bluestreak something,’ and they would be the ones who forever named it. It’ll be their cultivar forever,” Blosser said.

Throughout the field trip, students visited three different farms that grew soybeans. Each one focused on different methods of maintaining their soil and soybeans. One had organic fields, one only used Roundup to get rid of weeds and the last one used different types of soybeans on its fields.

“The cool thing is that we get to meet real farmers and not do just the sterile lab work; we’ve been out getting licked by dogs and getting mud on our feet and all that kind of stuff. Doing that helped us see what the end of what we’re doing is and why we do it, which was a really nice experience,” Blosser said.

Blosser has hopes for the biotech class and how they will handle their labs and collect their samples for the entire year.

“One of the things I want to do in biotech class especially is to make sure that what we do is relevant to our life here, and also I like to use native samples. We do start the year by buying a little bit of stuff to get started, however, starting now to the end of the year it’s all going to be collected by students. We’ll collect our own bacterias from the mountains and waters and from farm fields,” Blosser said. “The DNA that we collect is either from ourselves or from animals or plants, so I like to use native DNA. When you use native DNA for your research, then you have to go through the whole process; you have to collect the sample, you have to isolate it, purify it, and to me that’s much better of an experience than just buying it out of a catalog, we actually have to go get it.”