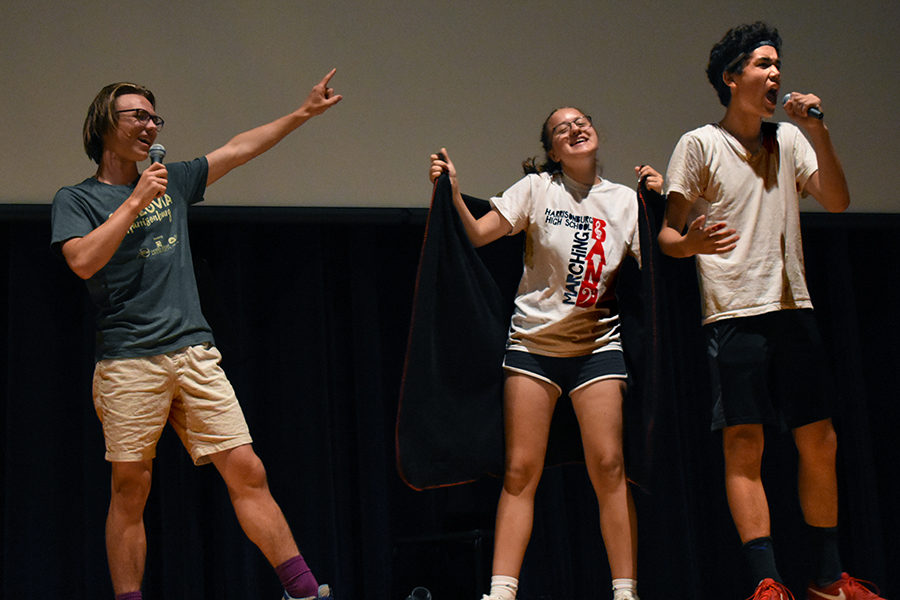 Sophomore Silas Benevento, junior Ruby North-Sandel and sophomore Stanley Inouye lip-sync to “I Want It That Way” by The Backstreet Boys.

The band program holds a lock-in every year in early September on a Friday night, right after a varsity football game. Students are locked in the school for eight hours through the night with other members of the band. This has been a tradition since before Daniel Upton, the current band director of seven years, arrived. All band students are invited, and typically 75 to 100 students participate.

This year, students rushed home from the game against Charlottesville to clean up and then came right back to the school. After a brief meeting to discuss rules and expectations, the students were released to do whatever they pleased.

During this time, students took part in a multitude of different activities. Some played a big game of sardines using the whole main floor of the school. Others got out instruments for a jam session on the stage. Another group started games such as basketball and soccer in the gym.

Around one in the morning, dodgeball began in the gym led by senior Andrew Ely. It was not required, but most students took part. They then split up into groups playing cards and various different video games. Soon after, lip syncing began in the auditorium. A variety of songs were performed such as “Stacy’s Mom,” “Don’t Stop Believin’,” “Country Roads” and “Lift Yourself.”

Later in the evening, they began played Marvel’s hit movie “Spiderman Homecoming” in the auditorium, where many students gathered and fell asleep. Others stayed awake all through the night playing games like Twister and Fortnite. A wake up call came at 6:30 in the morning, where everyone was woken up and expected to gather their belongings. They were released from the school to go home at 7 a.m. on Saturday morning.