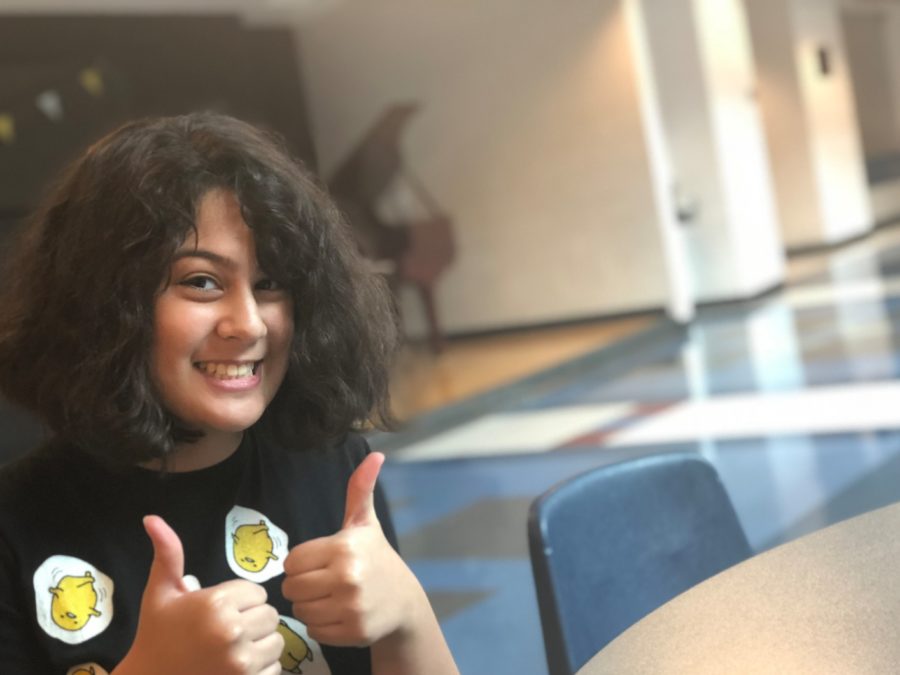 A. “In eighth grade, I made a huge Jenga tower. When I showed my teacher, he threw a basket at it. As the blocks were falling to the floor, I felt so much betrayal.”

A. “I’m taking art classes because drawing is one of the only things I’m okay at, so I’m taking some classes to improve my skills. I also think art classes are fun, and it [they] spice up my day.”

A. “I went to the Philippines a couple of years ago, and my best memory there was all of the lit food.”

A. “I went to VA Beach a couple months ago, and my mom found a Filipino shop that sold balut (duck embryo). Obviously balut sounds really gross, but it’s all the rage in the Philippines, so I tried it and it was a big old mistake.”

Q. If you were stranded on a island and only could take three things with would, what would they be and why?

A. “A lot of food, water and some tools. Everyone keeps throwing shade at this hypothetical island, but I get my own island, how fun. I can build a house and live my best life.”

Q. Worst ingredient to put in a burrito?

Q. Would you be a sheep or a wolf and why?

A. “I’m probably a sheep because I’m pretty nice and I have fluffy hair.”

Q. What animal on a carousel would you be?

A. “One of those horses everyone picks, because I’m not that original but people don’t hate me. I’m just ‘that horse’; a classic.”

Q. What crayon color would you be?

A. “I’m a ‘Jazzberry Jam’ because I’m a pretty jazzy person and I love jazz music. I also love puns, and jam is lit.”

Q. If a penguin wearing a sombrero walked in the door what would he say and why is he there?

A. “What up fam, I’m here to get the party lit. He’s there because he wants everyone to have a fun time, because who doesn’t love a penguin wearing a sombrero?”

A. “We had to make a ‘Passion Project’ in STEM last year, and I decided to make an animation. The animation was about a guy who tries to make jam, and never gives up. The theme was growth mindset. It was crazy because it took a lot of time. Once I finished it, the assignment was made extra credit, so I really didn’t have to do it.”

Q. If your life had a mascot, what would it be?

A. “A worm because they’re pretty chill and carefree. I’m trying to be as cool as a worm.”

Q. How sneaky were you when you were little?

A. “I was usually a pretty good kid, but one time I snuck down into the kitchen with my siblings and we ate all of the marshmallows in the Lucky Charms cereal box. My dad didn’t notice until a couple of days later, so I was pretty sneaky.”

Q. If you were given an elephant, what would you do with it?

A. “I would ride him and make dramatic entrances everywhere.”

Q. What would you name a boat if you had one?

A. “I wouldn’t name it at all. I would immediately sell it or give it away because boats and ships scare me.”

Q. Biggest screw up in the kitchen?

A. “I wanted to cut an apple for the first time, and I could only find a steak knife so I used that. What can go wrong, am I right? Plot twist: I cut my finger and there’s still a scar.”

A. “I saw a commercial about this energetic guy selling a mop. He was really excited about this mop because it has a button, and when you press the button, the mop spins. It’s supposed to clean better, but he had so much energy about this mop. We bought the mop anyways though, and it’s pretty lit.”

Q. What would be in the gag reel of your life?

A. “There’s [are] too many events. A few would include me tripping over a bike in P.E. class, me accidentally stabbing my finger with a compass during a geometry test and of course the time I thought cutting an apple with a steak knife would be a good idea.”

A. “The answers to ‘What would be in the gag reel of your life’ and [when] my grandma told me not to fall down this big flight of stairs. I told her I wouldn’t, and as I took my first step, I slipped and fell down the stairs. My grandma was concerned and disappointed.”

A. “I was listening to Pitbull’s song, ‘Timber’. In the song he says, ‘This biggity boy’s a diggity dog.’ I’m still confused about this line!”