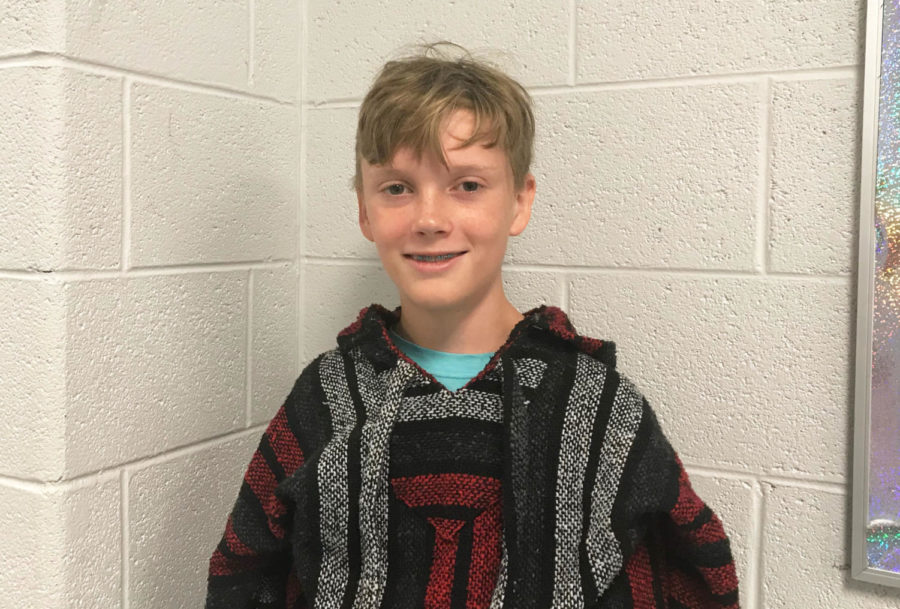 Q: Is high school what you expected it to be?

A: “It’s worse. A lot worse. So much worse. I expected it to be overcrowded and terrible, but like, dude, it’s like overcrowded. Terrible. My last block, we have a seat for every single student, dawg. It’s weird. I’ve never had that in a class before. It’s cool that I have four classes instead of eight though”.

Q: Is having four classes better than having eight classes? Why or why not?

A: “Yes, because I feel like it’s only been half of a day. Middle school has conditioned me.”

Q: Is the work hard for you?

A: “I haven’t had any homework yet. I haven’t finished my english assignments yet, but other than that, it’s pretty snazzy. Wait, did I have geometry homework?”

Q: Apple vs Android. Why?

A: “Like phones? I don’t have a phone, so I’m just going to say Apple. I like apples. They’re my favorite food, and I have an iPod.”

Q: If you won $5 million in the lottery right now, what would be the first thing you buy and why?

A: “Dawg, a charity. Just straight up buy a charity. I wouldn’t donate, I would buy it. It’s mine now. Legally I own it. I really don’t know why.”

Q: What do you want to accomplish before you graduate?

Q: If you could solve one world problem, what would it be?

A: “Math. We don’t even know what Pi is yet, dawg. If we figure out math, we could solve world hunger.”

Q: What’re your thoughts on NFL players kneeling for the National Anthem?

A: “Is that football? Do it man… I don’t really have an opinion on that. I guess they can have fun.”

Q: What movie would you recommend to other teenagers?

A: “Baby Driver. Best movie ever. Every gun shot in that movie is synched up to 20th century music. It’s just like…bang.”

Q: Are you an extrovert or an introvert?

A: “I think we know this already. An extrovert. I yell a lot.”

A: Loneliness. Because I’m an extravert, being alone scares me.”

A: “They’re different, I have both. If I’m gonna chill and ride my skateboard then I’m going  to wear Vans. If I’m running track, I’m gonna wear Nikes. They both have their upsides.”

A: “Tupac because I don’t know who Biggie Smalls is.”

Q: Why do you like the shirt you’re wearing?

A: “I don’t like my shirt. I like my hoodie. My brother was like, ‘You look stupid’ and ‘You’re hipster’ then I’m like, ‘You’re stupid and you’re not a hipster. Fight me.’ I got it for my birthday.”

A: “Hockey, because there are fights. Plus, it’s just cool. I don’t have a favorite team, I just like the sport.”

Q: What do you want to do after high school?

A: College. I want to do ‘college’ stuff. I want to major in The Arts I guess.”

A: “Creativity of the extrovert mind.”