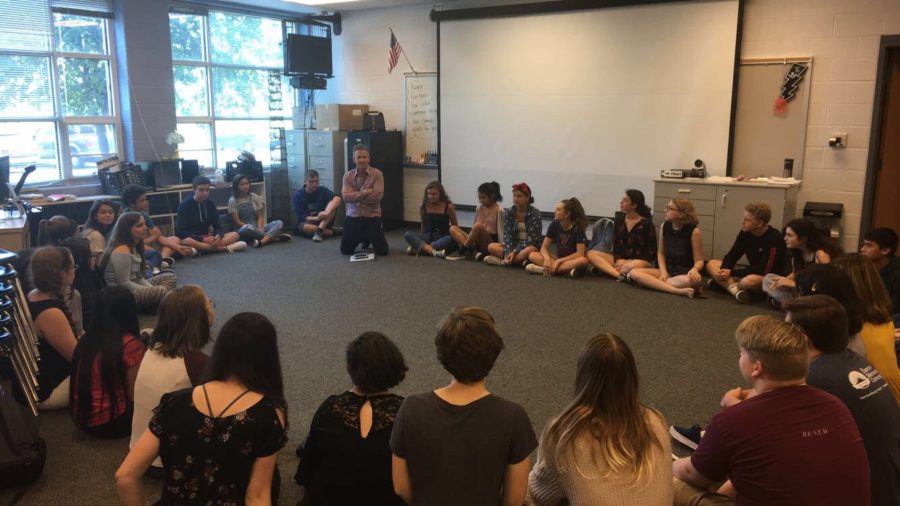 Students interested in auditioning for the one act sit in a circle during an after school meeting. At the meeting, new director Ken Gibson announced that the theme plot would follow the story of Buddha.

Preparations for this year’s one act have begun. On Tuesday, Aug. 30, drama teacher and director Ken Gibson held a meeting for students interested in auditioning. Gibson came to Harrisonburg High School from Spotswood High School this year, so the one act will be the first show he directs at HHS.

“[I’m looking forward to] the collaboration with all the students [that are] new to me. I think that would be the best way to take some steps forward to get to know them,” Gibson said. “These students all know each other, [but] they don’t know me. The collaborative process and creating art is the best way we can get to know each other and come together.”

This year’s one act is about the story of Buddha. At the meeting, the prospective cast members read through the script and got an idea of what Gibson is expecting for auditions. Sophomore Anabella Da Rosa is unsure if she plans on auditioning, but she attended the meeting to get a gist of the show.

“[The show is] a unique style, and I don’t know a lot about the one acts they’ve done previously, but I know it’s a lot different than the one last year,” Da Rosa said.

Sophomore Mariel Joven was part of last year’s one act, and she also attended the meeting. While she is nervous for auditions, she’s excited that one act season has begun because of her experience last year.

“Everyone is really nervous, but I’m excited at the same time. I’m excited because one act is such a fun time, even though it’s a serious competition,” Joven said. “There’s still fun aspects of it, like you get to go to workshops, and then the one act becomes your family because you’re with them throughout the whole year.”

Both Joven and Da Rosa don’t have a role preference, they just want to get a spot on the cast.

“For me, it doesn’t matter if I get a small role or big role. I mostly care about getting into the actual show. The experience doing one act is what counts for me,” Joven said.

For those who are interested, one act auditions will be held on Sept. 10, and the HHS performance will be held sometime in mid-October. Joven says that anyone who’s interested should audition.

“Anyone who is interested in the arts should take part in the one act because it is [both] learning experience and a fun experience,” Joven said.