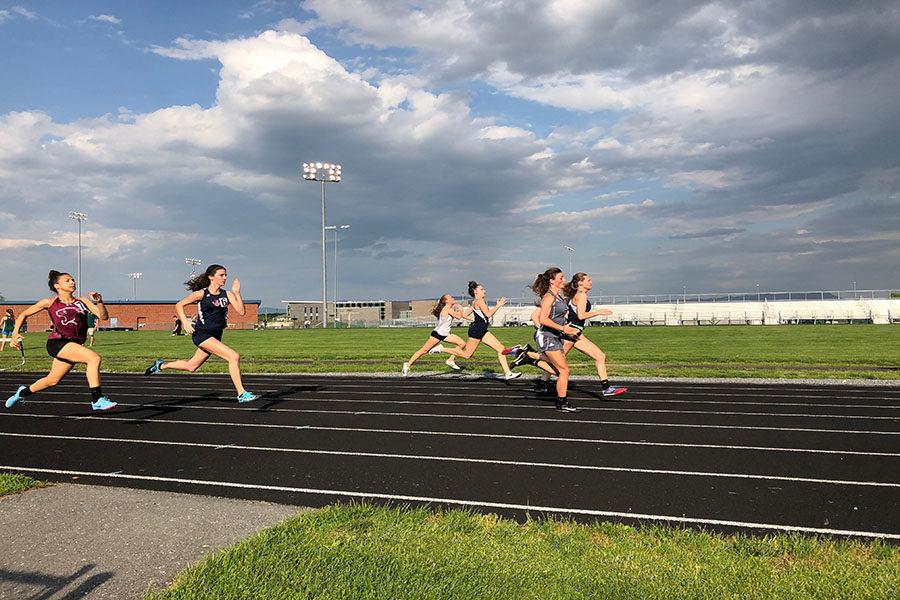 Seniors Carissa Roberts and Sydney Harper and freshman Elena Luhn run the 100 meter dash. Roberts reflects on what made her last season great. "It was definitely the friends. I’ve also gotten some great tan lines, so that’s amazing. I love my relays and I love running well," Roberts said.

Now that the regular track season has come to a close, the team hosted their annual end-of-the-season banquet Wednesday evening, May 31. The banquet not only celebrated the end of another season of competition, but also the end of a high school career for many athletes.

Senior Carissa Roberts already felt nostalgic for her years as a track runner, but the night also brought relief to be moving on.

“It’s kind of sad, but at the same time I’m ready to go. I was ready for track season to be over, I just wasn’t ready to be done with friends,” Roberts said. “It’s mostly saying goodbye to the team that I’m really sad about, not necessarily running.”

Sophomore Ana Rodriguez celebrated her first and last outdoor track banquet. Rodriguez was an exchange student this year and will be returning to Spain in June. While joining the track team helped her stay in shape, it was also another place where she made lifelong friends.

“I’m so sad, because I probably [am] never going to see some people here again in my life, so this is my last chance to say goodbye to everyone,” Rodriguez said. ”I enjoy the team; everybody on the team is so nice. That is the reason I want to go to school, because then I have practice and it makes me feel better.”

The annual event began with a dessert buffet and socializing, followed by recognition of every athlete.

“My favorite parts are definitely eating ice cream, and then how everything is just kind of a roast session and we get to laugh at each other,” Roberts said.

“The boys winning the district in the four by one [relay] was exciting. [I was proud of] the district meet in general. Pretty much everyone [got a record] across the board, whether it was a thrower, vaulter, jumper, whatever,” Denlinger said.

The banquet was a chance for athletes to reflect on the season’s accomplishments and say goodbye before a new season begins.

“It’s a laid back casual atmosphere. That’s the reason a lot of people do track is the social aspect.. Coming and hanging out with your friends. It’s free food and just a good time to celebrate,” Denlinger said.